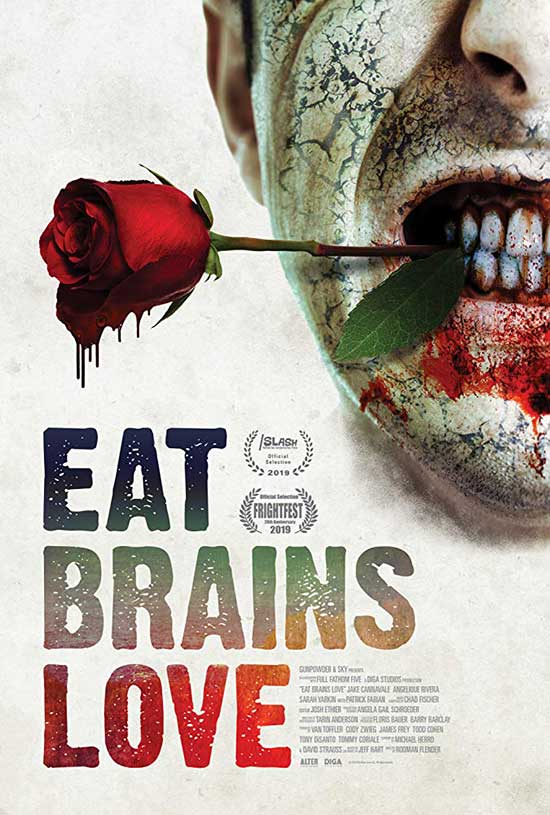 Eat, Brains, Love directed by Rodman Flender and adapted from a book written by Jeff Hart is chock full of gory scenes depicting human devouring zombie binge-fests but lacking quality in most other respects. With shallow unlikable characters, major plot holes, and at best a tepid romance between the main characters, this movie was a struggle to watch.

Amanda Blake (Angelique Rivera) is your typical popular high school girl consumed with boys, social status, and not much else. Jake Stephens (Jake Cannavale) is the high school stoner who seems to be sleepwalking through life and has major hots for Amanda, but Amanda only has eyes for her jock boyfriend. Apparently, sex (not bites) transmits the zombie virus to its victims and having contracted the disease, both Amanda and Jake turn into bloodthirsty zombies at virtually the same time during school lunch. They then eat their way through their best friends one by one with much enthusiasm and virtually no remorse. After the rampage they both return to a semi-normal human state, able to figure out they are now zombies, and make a break for it before the police arrive. Amanda decides that they need to go to Michigan to find her brother who may know of a cure for their condition.

Meanwhile agents from a secret government agency named the Necrotic Control Division (NCD) descend upon the high school to determine if zombies were responsible for the mass murders. A member of the NCD named Cass (Sarah Yarkin) uses her powers of telepathy while touching objects in the lunchroom, which reveal past events and the identity of the zombies. Cass and her partner locate Amanda and Jake and attempt to stop them by ramming their car into the car they are driving. Amanda and Jake manage to get away and are taken by a lesbian couple who also have the zombie virus. The couple takes Amanda and Jake under their wings and shows them they can live off eating rodents and animals, with the occasional chow down on a well-deserving sex offender. Soon the NCD catches up to them, kills the couple, and Amanda and Jake are on the run again. They continue to make their way to Michigan seeking help from Amanda’s brother. Along the way they eat sex offenders to stave off the zombie rage that comes from being hungry, but also decide to savagely devour an annoying driver that was texting and honking at them.

After arriving at Amanda’s brother’s house, they fill him in on what has become of them and the brother has them watch a video featuring a creepy guy in Ohio. Creepy guy explains he may have the cure to the zombie virus. They plan on driving to Ohio the next day, but not before their sexual tension heats up resulting in some very awkward and rushed zombie sex. Before they could really get into it, the NCD and Cass catch up to them again. Cass has grown a strange affection for Jake, despite his lack of any redeeming qualities. However, Cass used her psychic powers and revealed their location to save Jake’s sister who was taken hostage by a nefarious NCD agent. Amanda’s ex-boyfriend, now brain controlled by the nefarious NCD agent and zombified, attacks Jake and Amanda while they are getting it on. They fight him off, but Amanda is taken hostage by the NCD, while Jake runs away.

Jake makes his way to the NCD headquarters where Amanda is being held, and with the help of Cass and her psychic abilities they free Amanda from the facility. Before they can get away, they encounter the bad NCD agent and Amanda’s zombie ex-boyfriend. Cass uses her telepathy to turn the ex-boyfriend against the agent and he attacks him, enabling the now threesome to get away. Despite Amanda having attacked and killed Cass’s NCD partner/friend, Cass decides she is going to run off with the couple to help them find the cure for the zombie virus, even though she feels there is a good chance Amanda may try to eat her along the way. There are some genuinely funny moments in the movie, but they are few and far between. 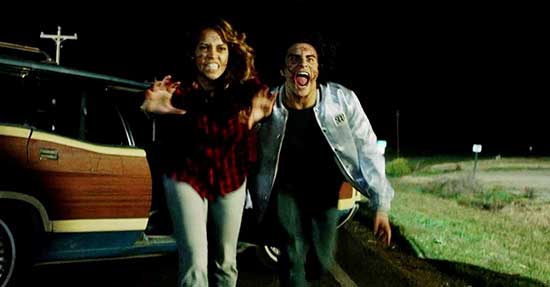 It also aims to use over-the-top gore and a few shockingly gross scenes to redeem this zombie flick, but unlikable characters and major plot holes just ruin the entire thing. Amanda and Jake are not believable at all as a couple romantically interested in each other and they have few redeeming personality traits. Both show little to no remorse at having eaten and slaughtered all their friends, yet somehow, they have enough conscience to only target sex offenders as their main meal. Even the plan to only eat sex offenders to alleviate their guilt falls through the cracks. At one point they decide to savagely eat and kill a man basically because he was texting and driving while honking at them. At another point in the movie Amanda bites the head off a rat and then uses the carcass as a microphone while sexily singing a song to Jake. Blood from the decapitated rat spills all over her white shirt, yet the next morning the same shirt is sparkling clean. As far as I know, blood doesn’t easily wash out of white clothing.

Cass from NCD is the other central character in the movie, but even she seems lacking in much morality, although full to the brim of questionable decision-making skills. Her infatuation and admiration for Jake is far from realistic given Jake’s zero depth personality and equally lacking positive character traits. Her flippant attitude toward the human carnage and aftermath of zombie attacks just doesn’t align with her role as an NCD agent. There are so many scenes in this film that just don’t flow, and the acting seems unnatural and devoid of any genuine, believable human emotion. The story idea was creative and I can envision what they were trying to accomplish with this film, but with actors that lack any chemistry and several scenes that are thrown together just to fill time, this film was dead on arrival.