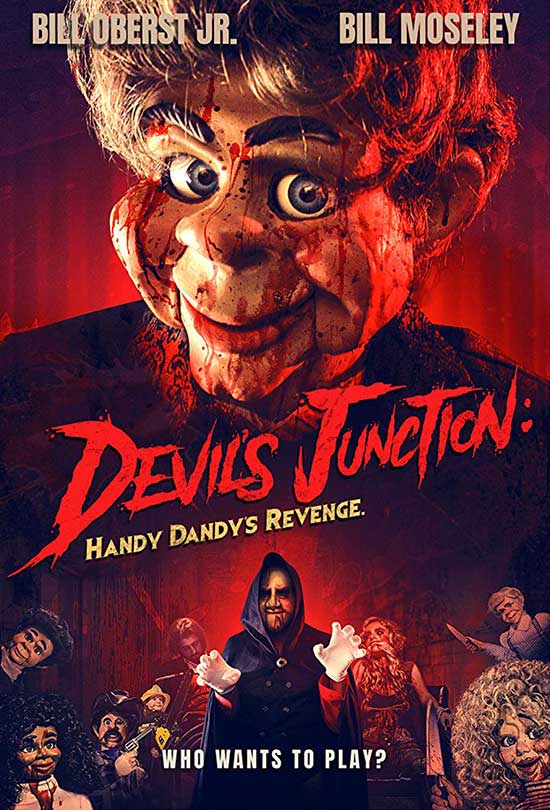 A group of friends (who are all walking stereotypes) find themselves terrorized by a ventriloquist and all of his ventriloquist dummies after making the terrible decision to hang out at an abandoned building that used to be where a kid’s shows was filmed years earlier.

I’ve always thought that ventriloquist dummies were terrifying, mainly because I saw the trailer for Magic when I was a kid back in the day and it scarred me for life. As such, I went into Devil’s Junction: Handy Dandy’s Revenge thinking that it might be a fun, creepy time. Boy, was I wrong. Instead I got an overly silly movie full of stereotypical characters, bad acting, uninspired death scenes, and a bunch of annoying ventriloquist dummies that were as about as scary as any given character from Sesame Street that all wanted desperately to be Chucky from Child’s Play. 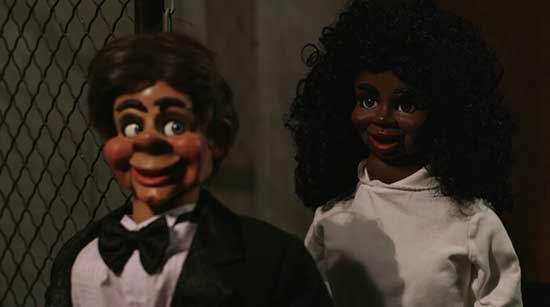 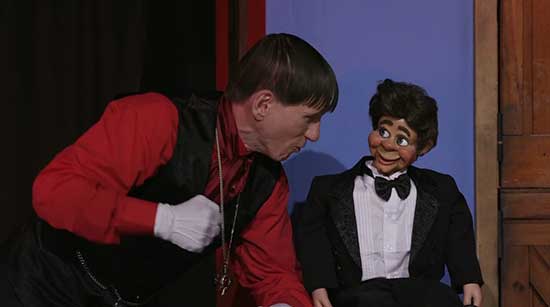 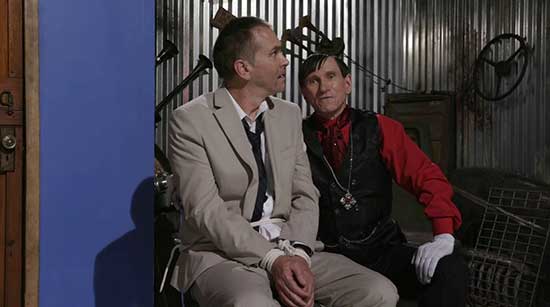 I’ll admit, the premise sounded promising (even if it is as about as cookie cutter as you can get). A group of friends decide to party in an abandoned building where a kid’s show featuring a ventriloquist and his dummies was filmed back in the day. Before you can say “Howdy Doody” the dummies are running around killing off the group of friends one-by-one as the ventriloquist controls them. Sounds pretty sweet, huh? Yeah, I thought so too but to my dismay I realized about ten minutes in that this movie wasn’t going to be a lot of fun. It takes a lot of talent to drop the ball on a movie about killer puppets running around slaughtering people, but somehow the people behind this managed to do just that. Things start off just so-so and then as things progress everything gets more and more convoluted to the point that I just didn’t care anymore and was eager for the film to end so I could watch a better movie that revolved around killer puppets. 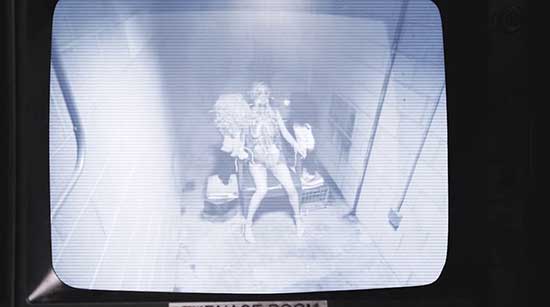 I think the biggest weakness of the movie is the fact that every character in it just a stereotype. We have the hot, blonde bimbo, the jock, the asshole that was born with a silver spoon in his mouth (whose father owns the abandoned building they are partying in), the smart, nerdy girl, and so on and so forth. It didn’t help that most of the actors playing these characters couldn’t act (with the exception of Katelynn E. Newberry who does the best she can with what she has to work with) so I wasn’t too upset to see most of them killed off. Even though I love genre icons Bill Mosely and Bill Oberst Jr. neither one of them seemed like the really wanted to be a part of this movie and just phoned in their performances (One more so than the other). If you are a fan of movies that feature walking stereotypes that are portrayed by people that have lackluster acting ability at best, then this movie is definitely for you. Otherwise, you may want to steer clear. 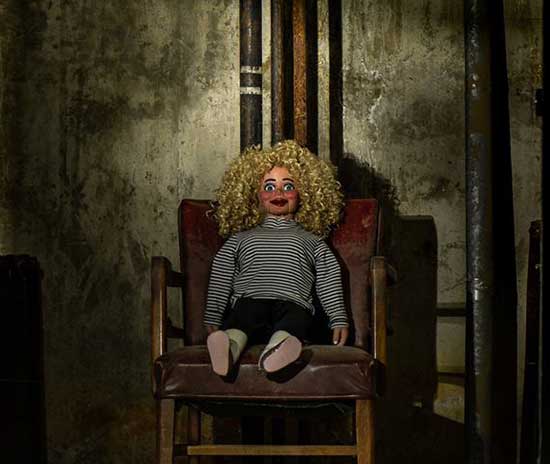 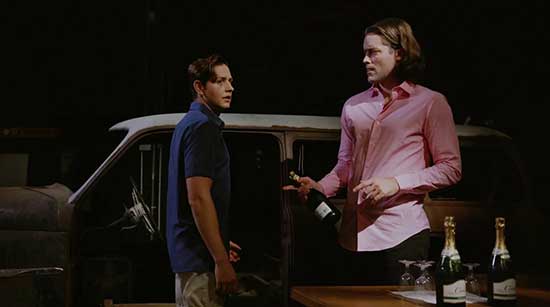 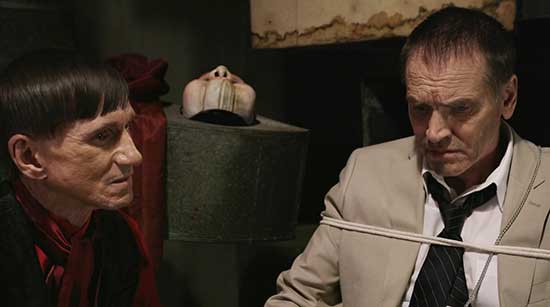 I thought that Handy Dandy and all of his fellow puppets were all super annoying and were just more obnoxious than threatening. Handy Dandy tries his best to be Chucky as he keeps throwing out cheesy one-liner after cheesy one-liner as he is interacting (or killing) the characters unfortunate enough to get in his way but can’t quite pull it off. His lines are as about as cornball as they get and instead of making me laugh, I actually groaned out loud several times as a result every time he opened his mouth and said something. The other puppets (especially the female one that follow Handy around) are equally annoying, and without a doubt my least favorite one was the greaser one that pops up at one point. His voice is like nails on a chalkboard and the stupid things he says makes Handy Dandy look awesome in comparison. It’s very rare for me to hate the antagonists of most horror films, but this movie is the definite exception as the puppets got old very quickly and I just couldn’t wait to see them all shoved in a woodchipper so I wouldn’t have to look at them anymore. 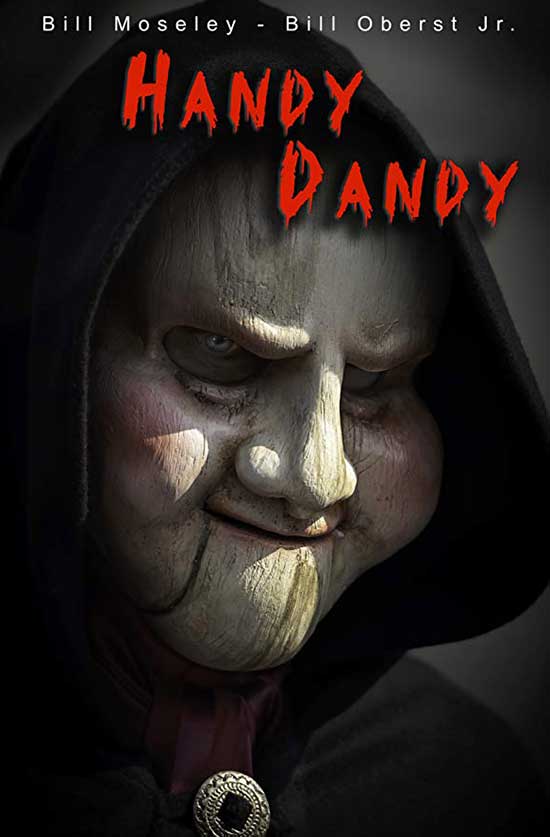 As you can tell, I just couldn’t get into Devil’s Junction: The Revenge of Handy Dandy. I thought it was poorly written, the acting is atrocious for the most part, and none of the death scenes really stuck with me and I’d forgotten about most of them the day after I watched it. I actually felt bad for Oberst Jr., Mosely, and Newberry for agreeing to be in this because all three of them are much better than this but I guess a paycheck is a paycheck sometimes so I guess I really can’t fault them as they all have bills to pay like the rest of us. On the plus side, I did like the song that played during the opening credits and thought that it was pretty sweet. Unless you are extremely bored and have nothing better to do, I recommend you skip this movie.