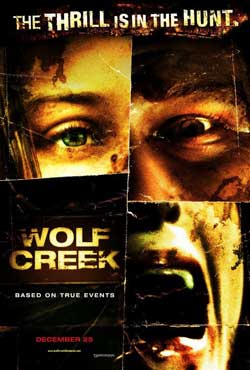 Based on a true story, three friends set out on a road trip to Broome, Australia. During a planned stop to the Wolf Creek Meteorite Crater, their entire trip takes a turn for the worst when they meet a local man who offers to help the group when they find their car broken down with no rest stop in sight.

I’ve spent years trying to put my finger on why “Wolf Creek” irritates me. A massive hit Down Under, everything about it seduced me. Love Australia. Love true stories. Love serial killer movies. Long story short, I was geeked. However, I was so underwhelmed by the experience that I felt I’d missed something. Had my expectations reached a lofty level impossible to achieve? Regardless the reason, “I just didn’t like it” is not an acceptable review, and approximately 800 words light. After a second gander at “Creek,” I emerged with a completely different outlook. I still don’t like it. However, this time around I know precisely why. 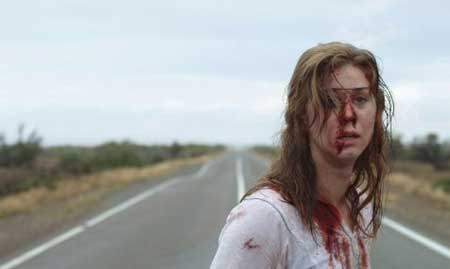 But, we’ll get to that later. Claiming to be based on true events, “Creek” plays more like the bastard child of two high-profile cases. The “Backpack Killer,” Ivan Milat, was convicted for the murders of seven hikers during the early 1990’s. Bradley John Murdoch, a drifter who killed an English tourist in 2001, also served as inspiration for the antagonist. In fact, the latter incident hadn’t yet occurred when writer/director Greg McLean first put pen to paper to bang out a rough draft. To infer any relation to fact is stretching, but an entirely forgivable indiscretion. After all, “The Texas Chainsaw Massacre” sang the same song in 1974, and we know how historically accurate that was.

An amusing and reportedly ad-libbed used car negotiation introduces the first of our three leads, Ben (Nathan Phillips). After purchasing the vehicle for a journey from Boome to Wolf (spelled “Wolfe” in actuality) Creek Crater National Park, he meets traveling cohorts Liz and Kristy (Cassandra Magrath, Kestie Morassi) on the beach. The three twentysomethings are immensely likable and easy on the eyes, keeping the opening aloft through mundane dialogue and an inexplicably lengthy pool party sequence that serves no purpose other than to cement the stereotype that Aussies sure can pound down the liquor. If they ever remade “Driving Miss Daisy” there, I’m confident the “You’re my best friend” clip would entail body shots.

Following a tense encounter with locals at a gas station/bar (Did I mention I love Australia?) en route, the trio arrives at the park just as a drizzle starts. Kudos to the weather during the shoot, which grows more ominous as the film progresses. After a hike around the crater and tame make-out session between Ben and Liz, they return to find the car won’t start. Dreading the thought of spending a frigid night there, they’re relieved when Mick Taylor pulls up in a truck that may as well have a “Serial Killer On Board” decal in the window. Being in a horror flick, the kids pay no mind. John Jarratt, a method actor who stayed in character between takes, has received vast accolades for his portrayal of Mick. There is no doubt, he owns “Creek” from his first second on screen. As the seemingly genial Bushman who is more than happy to lend a hand, Jarrat brings a palpable underlying menace to these earlier scenes. Too palpable, frankly, because no one of sound mind would let this creep tow them in the opposite direction of the nearest town to fix the car, as Mick suggests. He explains that his place has the required tools. Keeping consistently oblivious, they agree and are hauled further into the middle of nowhere to an abandoned mining campsite. Mick toils away under the hood as the gang conks out around the fire. 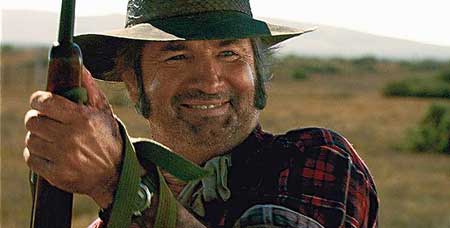 Cut to a few hours later. Liz awakens bound and gagged in a cramped shed on the property. She escapes (too easily) and follows the sound of screams to a garage, where she spies Kristy, chained up and bleeding while Mick taunts and beats her. Up until this, I was on the fence concerning “Creek.” It was slow to build steam, but beautifully framed and edited. McLean is a talent, as his second feature “Rogue” reaffirms. He utilizes the film’s limited budget and digital presentation to his advantage, creating a striking urgency with entirely hand-held work. As a product, “Creek” is undoubtedly wrapped in a pretty package.

Such a pity the movie becomes so very ugly. First, my personal opinion on motion picture violence. I’m for it. When horrible mutilation and/or dismemberment are accompanied by that juvenile glee the likes of Frank Henenlotter and Stuart Gordon have built careers upon, it’s a good time. Unflinching honesty in depicting brutality is also an effective tool, as displayed in “The Strangers” or “Henry: Portrait of a Serial Killer.” What makes everything that follows the moment Liz stumbles upon the torture session reprehensible, and (bringing it back full circle) what really bothers me, is this: “Wolf Creek” tries to have it both ways. 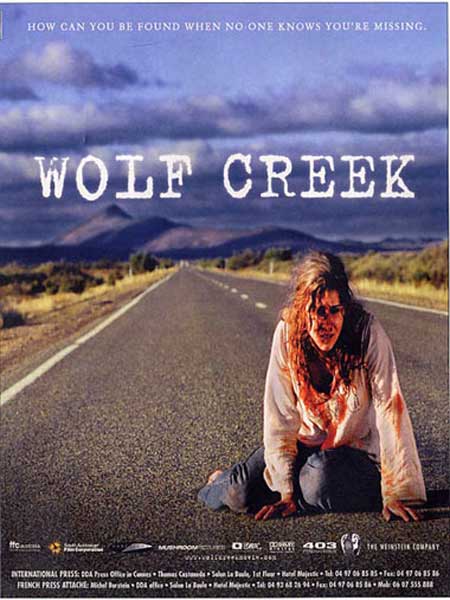 The endless parade of nastiness that unfolds to round out the latter half is realistic to the point of punishment. The plot is inconsequential, as the emphasis shifts into snuff film mode. The girls escape after Liz shoots Mick and leaves him to (sigh) get right back up and continue his pursuit. The issue of what happened to Ben isn’t even addressed until after both females are disposed of, Liz in a particularly savage and heartbreaking fashion. All this would be enough on its own to warrant distaste, but it’s Mick that makes “Creek” truly repellent. Jarratt plays everything from the middle reveal so obnoxiously broad, the villain is reduced from frightening heavy to dancing evil monkey. This would be perfectly acceptable of a nameless sadist in, say, a “Hostel” sequel, but a ridiculous misstep in a piece that takes his actions seriously. The contrast isn’t merely distracting. It’s damning. 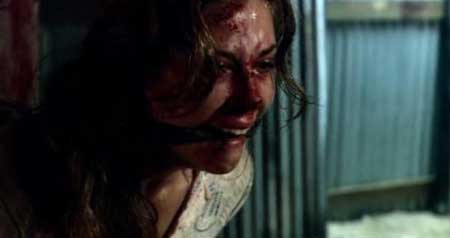 Spoiler Alert: Nothing goes well for anyone except the bad guy. Roll credits. Not so fast friends, because “Wolf Creek 2” will be hitting theaters soon. Eight years is a bit late in the day to fully cash in on the success of its predecessor, but that’s what a former up-and-coming director does when staring down the barrel of premature obscurity. Perhaps I’m being harsh, and the sequel to “Wolf Creek” will be an improvement. I don’t intend to bother finding out. 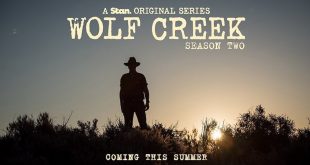