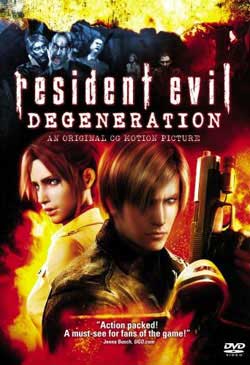 A zombie attack brings chaos to Harvardville Airport. Leon S. Kennedy and Claire Redfield , who fought the sinister Umbrella Corporation during the Raccoon City tragedy 7 years ago, are back. In high-octane Resident Evil style, they’re ready to battle a rogue warrior who is seeking revenge after his family was killed in Raccoon City. The deadly G-Virus is unleashed and a new mutated monster goes on the rampage. Will Claire and Leon be able to terminate the virus before history repeats itself?

in this animated installment of the Resident Evil saga, Claire Redfield (voice of Alyson Court) and government agent Leon S. Kennedy (Paul Mercier) reunite in a busy American airport, where a T-virus-infected zombie has been set loose amid the civilian crowd. As Claire and Leon dodge and destroy zombies and search for any survivors, they must also expose the bioterrorists who are using the T-virus attack to hold the country hostage.

Going on the strength of a popular game and movie franchise the Resident Evil continues. This time in the form of the all CGI film “Resident Evil: Degeneration”. As exciting as the franchise is (and quite frankly I loved all the films) having it presented in a different way is both exciting and disappointing. I wasn’t sure what to make of this one. On one hand being a supporter of CGI, I recognize the work and time that went into making this. Nice camera angles, nice use of CGI ingenuity and alot going on. On the other, I really enjoy the Milla films and am more privy to that version of the RS empire. I do confess to knowing about the video games but never actually playing them. While they do look exciting, unfortunately time is not on my side to dig in. So of first watch, it appears very much like the intros to video games. Good for video games, but maybe less impactful as a film product.

I thought the CGI performed on the film “Polar Express” was fantastic. Though as good as the animators did with RS, its not Polar Express level. I’m really gonna go with this will be a hit or miss entirely with fans. CGI is starting to really show up more on a film level , but I still think there is ways to go to really feel at home with it. RS is a case in point. I found myself disconnected with the characters who’s facial expressions moved “somewhat” but not enough to connect to. Even some of the faces seemed like repeats of the same mold. The most impressive was the character of Senator Ron Davis who offered a more believable look than others. Still even with voiceover’s, the characters came across pretty emotionless.

Our films begins at the Harvardville Airport as militants fight off a zombie outbreak. The setting is coming off the viral outbreak at Raccoon City. Plotting, espionage and zombies follow as we learn more about the incident, its corrupt officials and the outbreaks that seems to keep popping back up. Directed by Makoto Kamiya, The film stars Alyson Court playing the voice of Claire Redfield, Paul Mercier as Leon S. Kennedy, Laura Bailey, Michelle Ruff and Michael Sorich.

More damaging than the T-virus is the newly engineered G-virus. Its results? A metamorphosis of massive proportions creating an unstoppable monstrosity. The action is pretty dynamic as the team of Leon S. Kennedy and Claire Redfield take on the transformed Curtis miller who injected himself with the virus to show its effects. The WilPharma’s HQ is targeted with a terrorist attack and is bombed in the process. Leon and Claire make for there escape before the building goes under and fighting off the G-infected Curtis in the process. There of course is more to the story, however its best to save that for viewers as the details get pretty involved.

So how do rate a film that is intended for another medium? I suppose its a plus /minus relationship. You “do “feel like you are watching a video game. That gets old after about 10 minutes. You do have a horror films with alot of Zombies…but these are no Romera / Savini looking zombies, they are shapes with textures over them. You do get more action and higher level CGI experience than “just” the intro s to video games but is it enough? So without being 1 sided, i’ll say it’s not for me, but it might work for others…fair enough?

In the least, the animators excelled in talent and presentation means but lacked in human connection aspects. I have a feeling this will connect better on that basis with younger viewers than older horror fans. All in all its got its charm and impressive array of CGI that will appeal to some and be ignored by others. Fro now I’m holding out for Resident Evil 4.