THE IGUANA WITH THE TONGUE OF FIRE (4/9) 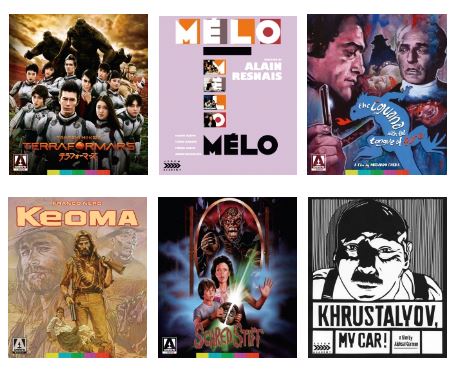 Spring into April with Arrow Films!

Once you’ve completed your spring cleaning, Arrow Films invites you to kick up your feet and relax with six new titles coming to Blu-ray this April. The month begins with the April 2nd release of Takashi Miike’s Terra Formars. This sci-fi adventure sees a team of space explorers take battle against a horde of oversized anthropomorphic cockroaches. The release in includes a full-full-length documentary on the making of the film, outtakes and more. Fans of Miike will certainly be thrilled to get their hands on this modern classic.

April 9th sees two releases hit shelves starting with The Iguana with the Tongue Fire. Set in Dublin, an oddity for a giallo, this film from legendary director Riccardo Freda follows a series of brutal killings that carry political complications. The film is presented with a new 2K restoration from the original 35mm camera negative. The second April 9th release is Mélo from director Alain Resnais. This story of a doomed love triangle is based on the classic play from Henri Bernstein and come with a stunning new 2K restoration.

Keoma, one of the greatest spaghetti westerns comes to Blu-ray on April 16th. Pairing two icons in star Franco Nero and director Enzo G. Castellari, this is the story of a half-breed gunfighter that returns home to find his fellow townsfolk terrorized by a terrible gang. This truly epic film gets an epic release presented with a new 2K restoration and loaded with brand new special features. If you’re a spaghetti western aficionado this one is a must for your collection.

Mary Page Keller and Andrew Stevens star in Richard Friedman’s Scared Stiff, coming to Blu-ray on April 23rd. A singer moves into a colonial mansion with her son and boyfriend only to uncover deep, dark secrets hidden within the boarded up attic. Fans of ’80s horror and practical effects are sure to have a soft spot for this one.

The month comes to a close with the April 30th release of Khrustalyov, My Car! This darkly funny satire is the story of a military doctor arrested in Stalin’s Russia, accused of being a participant in the so-called “doctor’s plot.” This limited edition release includes a 60-page booklet featuring new writing by Gianna D’Emilio, an archival essay by Joël Chaperon and original reviews.