Free Troma Tuesdays at Lucky 13 Saloon to Screen
The Slashening on March 5th at 8 PM with Director Q&A! 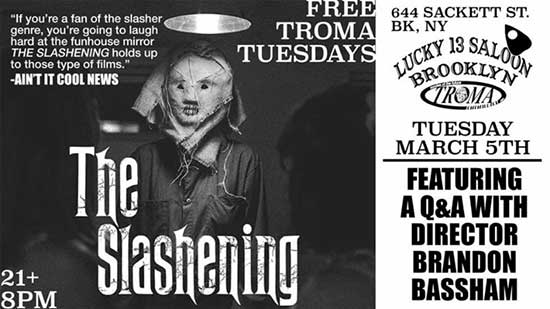 THIS WEEK ON FREE TROMA TUESDAYS…

This sleepover has everything: sexy girls, drinks and murder!

Sleepovers are always fun; you’re with your best friends, you eat and drink whatever you want, and no one can bother you. Unless it’s a psychopath hellbent on murdering you and everyone you know! Four best friends must band together (or split up, because that’s always a good and smart idea) and face an evil murderer if they want to see the morning again! ‘The Slashening’ is a tale of friendship, betrayal, madness, and the search for some decent dick!

Brandon Bassham’s parody on the horror/slasher genre is one that rivals the hilarity of the ‘Scary Movie’ films (specifically the first one)! With him being in attendance for a special Q&A, attendees will get to have a comedy experience unlike any other!

Lucky 13 Saloon is proud to be hosting free Troma Tuesdays this month, and we’ll be screening some of our best Troma films, with filmmaker Q&As, blood, and more mayhem than ever! No one under 21 is admitted, so you know it’s going to be a real good time! Every screening starts at 8 PM!