Home | My Journey to The Beyond: A Fan’s Discovery of Fulci’s Classic

My Journey to The Beyond: A Fan’s Discovery of Fulci’s Classic

Released in 1981, The Beyond, directed by Lucio Fulci, has long been considered the Italian filmmaker’s masterpiece of gore.  It has amassed a horde of devoted fans throughout the years, including Quentin Tarantino, who would praise and re-release the film.  At this point I can already hear you shouting at me through the paper, “Wait, we know all this already!  So what?”   Well, believe it or not there are horror fans out there who may not even heard of this beloved gorehound favorite.  As the film’s thirtieth anniversary fast approaches I find it necessary to share the history of and my perspective on The Beyond directly to those who only know the legend of Fulci’s crowning achievement in horror or who are totally unfamiliar with it.  I find it important, because for a long time I was both of those examples.  I have only been aware of The Beyond for less than a decade, and for most of that time the film would just be just that: a legend.  So, I know how it feels to be late to the party.

I have been a fan of horror cinema since I was a kid, and I had seen plenty of cult films and obscure oddities throughout my youth, but it wasn’t until 2002 that I first came across something regarding The Beyond. There was a British entertainment rag- I don’t remember which one- that belonged to my roommate at the time sitting on the kitchen table, and as I was flipping through it the image of the (Spoiler Alert!) redheaded girl’s exploded head taken from the film caught my attention. Naturally, I started reading the article, which not only introduced me to The Beyond but also to the Video Nasty phenomenon in England during the 1980’s. It was this moment that would launch my love affair with The Beyond and its legendary creator, Lucio Fulci.

Fulci, who passed away in March of 1996, had a career that spanned nearly forty years, and across many different genres of film.  In fact, his directorial debut, Jukebox Kids, was a musical comedy.  Fulci would go on to westerns (Four of the Apocalypse), crime dramas (Contraband), a period piece (Beatrice Cenci), and, more famously, a series of thrillers (Lizard in Woman’s Skin, Don’t Torture a Duckling, and The Psychic).  Yet, the man is by far most famous for a succession of over-the-top and extremely gory horror films in the late 70’s and early 80’s.  Fright fans have long lauded Fulci’s unrelenting, apocalyptic epics of eye-gouging, throat-ripping, and murderous rotting corpses, and The Beyond is considered to be the filmmaker’s masterpiece.

The second in an unofficial trilogy (which started with City of the Living Dead and concluded with The House by the Cemetery) begins in the Seven Doors Hotel in 1927 Louisiana, where an angry mob comes to lynch a painter named Schwieck, who they suspect to be “ungodly warlock”.  Schwieck warns them that the hotel is located on one of the Seven Gateways to Hell, and that he‘s the only one who could help them. But in their blinded fear they drag him down to the basement.  Already, Fulci hits the ground running as the mob whip the flesh off his body with chains and crucify him to the wall with steel nails before dousing him with quicklime.  Cut to 1981, and New Yorker Liza (Katherine MacColl) has inherited the now dilapidated hotel, and is working diligently to repair it for re-opening.  In no time at all, strange things are afoot.  First, the housepainter mysteriously falls off a scaffold, prompting local doctor John McCabe (David Warbeck) to come and take him to the hospital.

Liza then runs into a blind woman named Emily (Sarah Keller), who begs her to leave the hotel.  Meanwhile, a plumber comes to examine the flooded labyrinthine basement, unwittingly re-discovers the portal after it had been walled over, and pays for it big time!  Even after all the accidents, her distrust in the employees who “came with the hotel”, and the constant visits and doom prophecies of Emily, Liza is still determined to stay.  But the occurrences get more frightening and the evisceration escalates to jaw-dropping levels, forcing Liza and the self-assured McCabe to try and uncover the truth about the hotel, or at least a version of it that will satisfy their sense of rationality.  The whole thing climaxes in a shoot-out with the undead in a deserted hospital, which leads to one of the more bizarre, not mention more subdued, endings in horror movies. 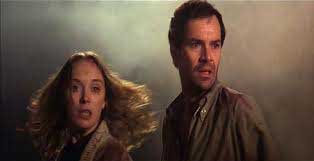 The Beyond never got a proper theatrical release in the U.S. when it was produced.  Instead, it was relegated to a very limited theater release and home video in the US as (the heavily-censored) Seven Doors of Death in 1983.  It wasn’t until 1998 that Quentin Tarantino and Grindhouse Releasing (founded by Sage Stallone and film editor Bob Murawski) re-mastered the film and gave it a real American debut on the midnight movie circuit, as well as a DVD release by Anchor Bay (in standard and a limited tin edition) in 2000.  A blessing for those who waited patiently for the film to be brought stateside in its uncut form, but for me I was still in the dark.  At the time of the re-release I was still stuck in the rural, cultural black hole of Coalinga, California, still under the impression that The Rocky Horror Picture Show was the only midnight movie that ever existed, and by the time I became familiar with The Beyond, both DVD editions were dried up.  Instead I was stuck with a cheap disc of the butchered Seven Doors of Death version, given to me as a Christmas present by my roommate, who, also being a horror fan, should’ve known better.  Then again, he didn’t turn out to be such a great friend anyways, but I digress.

When I popped in Seven Doors of Death I didn’t know it was a heavily-cut version of The Beyond.  The fake title card should have been the first clue, but as the movie progressed, it was very clear to me the plot seemed all-too-familiar to the film I had only read about.  In addition to the crappy transfer, there just seemed to be no point or purpose to what was going on, therefore making a very boring experience.  It wasn’t until I caught a glimpse of the image that first turned me onto The Beyond in the film that confirmed my greatest fear: I was indeed watching a bogus cut of the movie I had been searching for.  It was one of the most disappointing movie moments of my life, compounded by the fact I discovered soon afterwards that the Anchor Bay DVD was now out of print.  I actually gave up on The Beyond for a while.  It would take seeing Fulci’s 1979 opus, Zombie, in its uncut edition to re-ignite my interest in the director, as well as my pursuit of The Beyond.  I had a Netflix account, but they were no help.  So, I had no choice but to plop down some serious cash for a used copy of the limited tin edition on Amazon. Hey, if I was going to spend money on a movie I (on some level) never saw I might as well go all the way.  I’m glad I did; The Beyond lives up to its legend, and has become my favorite of the Fulci gore pictures of this period.

The critics, though, were never on the side of The Beyond, or Fulci’s body of work for that matter.  Those who viewed the film during its 1998 debut in America weren’t just dismissive of it, they were merciless.  A very famous critic from the Chicago Sun-Times wrote, “The plot involves … excuse me for a moment while I laugh uncontrollably at having written the words ’the plot involves’”.  One reviewer called The Beyond’s plot “annoyingly threadbare”, while another from the San Francisco Chronicle writes, “Hell is worse than this?”  While I believe both factions are rightfully entitled to their opinions, I have to tip the scale over to the side of the legions of the Fulci faithful.  What the mainstream critics failed to see- or rather chose to ignore- is the intention of The Beyond and, in turn more importantly, it’s execution.  This isn’t like most of the American slasher films that followed throughout the rest of the Eighties, whose sacrifice of storytelling in sole favor of gore is clearly out of laziness.  With The Beyond, Fulci wanted to make a purely visual gothic horror piece.  The point of the plot is to act as, as one reviewer favorable to the movie calls it, a “clothesline” for the gore sequences.  The Beyond, even after nearly thirty years, never fails to shock as it delivers some of the most spectacularly gory moments ever put on screen (courtesy of FX artist Giannetto De Rossi).  It is the pay-off of those extremely violent moments which the movie builds up to, and the reason why, without those pay-offs, the Seven Doors of Death version is nothing more than an aimless bore.  In addition, the audacity- and maybe a little viciousness on Fulci’s part- behind the sanguineous set pieces is why the film continues to pack a gross-out punch!  The Beyond walks a really weird line between a traditional narrative film and avant-garde cinema.  Whether or not popular film critics will ever give the movie kudos for trying- or even acknowledge such notion, period- doesn’t, or shouldn’t, matter. 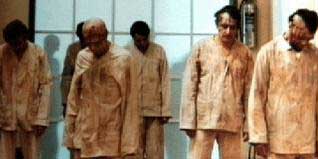 It was a long journey to experience The Beyond in all its gothic, gory glory.  You always hear about instances of the chase being much better than the catch, but in this case I have been savoring the catch every single time The Beyond is in my DVD player.  Younger horror fans will also savor and appreciate what Fulci delivers with this film.  Lucky for them, the film is once again available on DVD, this time courtesy of Grindhouse Releasing.  The Beyond serves as a worthwhile ride into ultimate, surrealistic gore, and as the perfect introduction for anyone looking to discover Lucio Fulci and Italian horror cinema.

Tags Beyond Fulci GRINDHOUSE Lucio The Wizard of Gore zombies