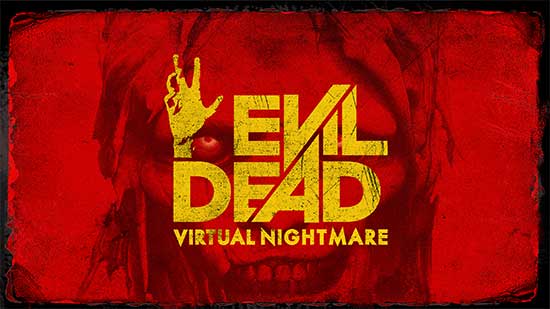 Are you ready to be truly immersed in the world of Evil Dead? Enter through the Book of the Dead and find a world of horror, violence, deadlites and Mia….

Based on reimagining of the 1981 cult-hit horror film, Evil Dead: Virtual Nightmare is a soul- crushing mobile VR game brim to the edge with gleeful gore and terrifying twists. The game offers fans a truly unique opportunity to fully immerse themselves within the Evil Dead universe unlike ever before. With 360 degree sound and vision, you get to explore inside the infamous cabin and the depths of the surrounding forest.

What begins as a tribute to the franchise quickly descends into anarchy as you are thrown into a chaotic fight for survival. When the discovery of an ancient book summons up an evil force, you find yourself trapped and alone in a desolated cabin in the middle of the woods. Hordes of defiant demons, an arsenal of iconic weaponry, and fast, fluid movements set the atmospheric adrenaline-pumping scene. Discover increasingly challenging missions in the Book of the Dead, unlock charms, pick up new weapons and gather some courage as you combat powerful bosses! Dare you enter the Evil Dead forest for the ultimate VR horror experience?

Evil Dead: Virtual Nightmare features:
•Intense, 1st person POV, puts players at the centre of the Evil Dead universe
•Unnerving 360 experience of the iconic Evil Dead cabin
•Access classic Evil Dead weapons from a nail gun to the chainsaw
•New upgraded weapons, including sights on all guns
•Unlock tougher missions from the Book of The Dead
•Realistic 3D VR graphics and camerawork recreate the look and feel of the movie set
•Set your Groovy Factor racing as you kill your way through the forest

They are also running a competition on Facebook, Twitter and Instagram called ‘The Traveling Chainsaw’. Each week, followers are asked to guess where in the world the chainsaw is located, with correct guesses entering a draw to win Evil Dead T-shirts, copies of the game when it’s released, and the chainsaw itself. We recommend getting over there to check it out for yourselves!