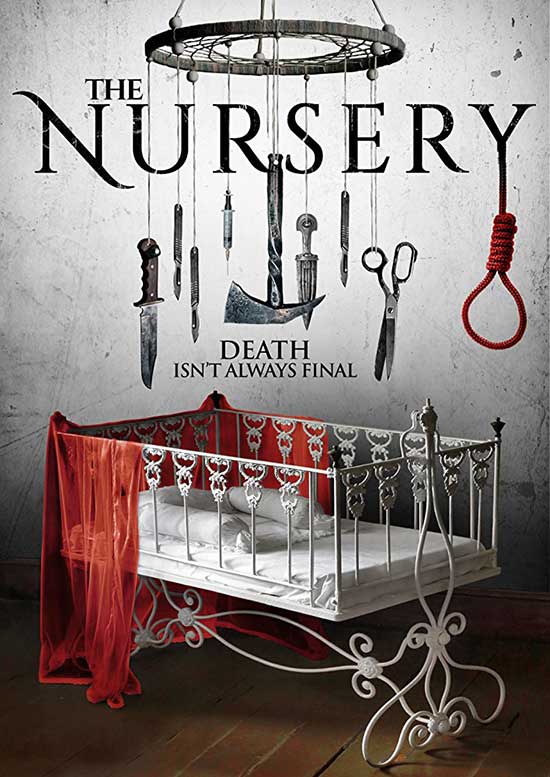 “A babysitter is stalked by a frightening ominous presence in The Nursery, creaking its doors open this June from Uncork’d Entertainment.

From filmmakers Christopher A. Micklos and Jay Sapiro comes the story of a young woman whose run-of-the-mill Saturday night quickly turns into a confrontation with unspeakable horror!

When Ranae, a college student babysits for a family with a tragic history, she finds herself stalked by a sinister presence and haunted by ghosts from her own past. Soon, she and her friends must confront the angry, evil spirit hunting them down one-by-one on a deliberate march towards its ultimate prey.

Emmaline Friederichs, Madeline Conway, and Carly Rae James Sauer star in thespookfest of the Summer The Nursery, available on VOD June 5 and on DVD August 7 from Uncork’d Entertainment.”

The films starts off with a semi-happy sequence. A girl throwing leaves around. She looks happy but of course you can tell that is about to end. Another woman shows up and well, the fun is over. The opening scene is beautiful though. Sunshine, trees and lots of happiness that you can pretty much guarantee will not last.

The eerie music also makes it creepy. Flash forward to a young woman sitting alone and she is looking at her phone. (There is texting involved. You will have to watch it) the same girl is now walking along a semi-lit area that looks like it could be a college campus area. (Here’s hoping she has pepper-spray or rosary beads. You know, the essentials.) 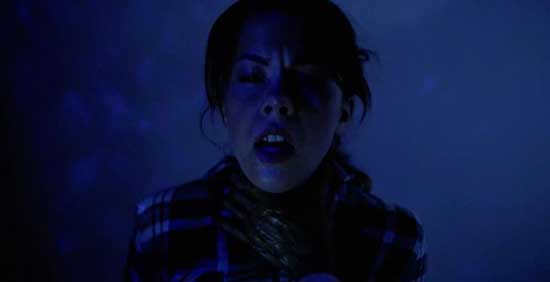 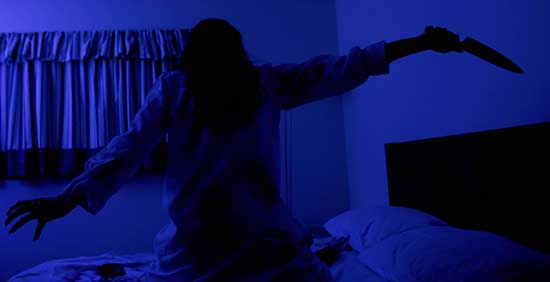 It feels a little slow at first but believe me you need the story and the pace for what happens to happen. Now the girl walking along is picked up by her friend who is sarcastic and apparently the one with some money. When they pull up the dark house as they are driving along a rather dark road gave me instant “When a Stranger Calls” vibes. I wanted to shout TURN AROUND, go back! STOP! We now discover that Madaline Conway playing Ranae will be babysitting. The creepy husband answers the door and we meet the family. The father and Deanna Sapiro plays Tanya the mom.

They give her all the information and inform her of the anniversary date they are going on. The conversation feels the way a conversation between parents and a babysitter should go except for now you can “call or text if you need anything.” But, the question is will her phone work? Will the baby be a demon? Will her friend get murdered? So many questions and the movie just started (and I just heard a noise in the kitchen. I’m not checking) during my interview with the talented directors they shared a lot of cool information about the house and more.

I also never understand why people do not turn lights on? The babysitter decides to go and check on the baby. It takes us through a bit of a weird sort of psychedelic acid trip, Rob Zombie moment as she walks to the nursery. She finally gets to the nursery and the slow walk towards the crib is one of the creepiest and longest walks ever. Ohhhh, and it was a…. You are going to have to watch. (Did I lock the windows?)

Ranae wakes up sweating and then looks like she is not sweating. Her rather obnoxious friend calls ala “Scream” as Ranae wonders around the house she hangs up. Now, the ultimate movie no-no. Don’t go in the basement. 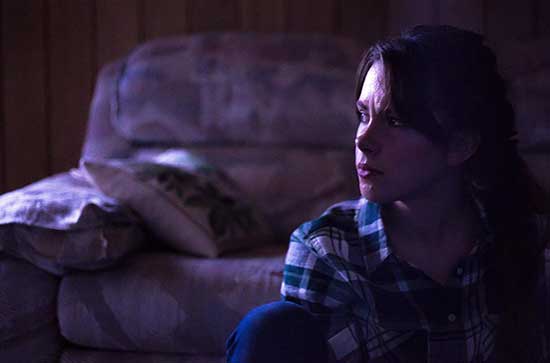 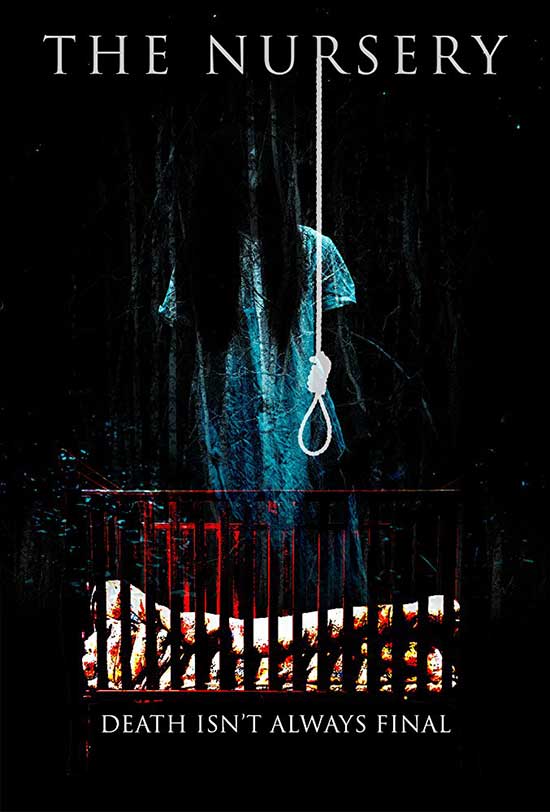 Now again back to checking the baby in the “nursery.” She is getting weird messages on her phone and of course she blames the friend. (If Michael Myers knocks on the door, tell him the nursery is scary enough.) One thing you may notice when watching “The Nursery” is the house is sort of a character on its own. Ranae is also still receiving strange text messages and random messages from “Mom” and we gather it is her mom?!

Ranae’s friends arrive at the house now. You pretty much already know a bunch of craziness is going to happen. There are a few jump-scares but the film is consistent with keeping things steady. They do not over-do anything. We also discover that Ranae’s brother Ray, (Marco Lama) may be a paranormal/ghost hunter? (Maybe he watches “Supernatural” and my instinct was to yell “get the salt” at my laptop)

The pace and the fact that they are filming in one of the filmmakers childhood homes makes this even creepier. Ranae’s friends want to bail now. It is all fun and games until….. Lots of bad stuff.

The film begins to intensify half-way through and the brother starts to help. Grace (Carly Rae James Sauer) gets in a tad bit of trouble. You feel the scares and the way they shot the film gives you a perspective of seeing what may be real and what not be real including the baby and the creepy nanny. 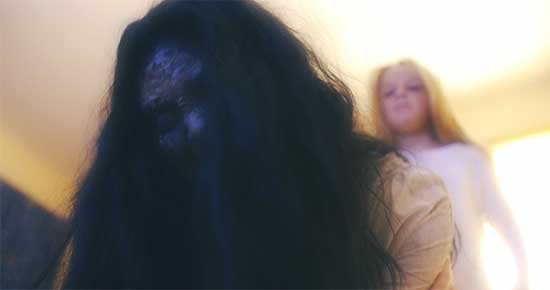 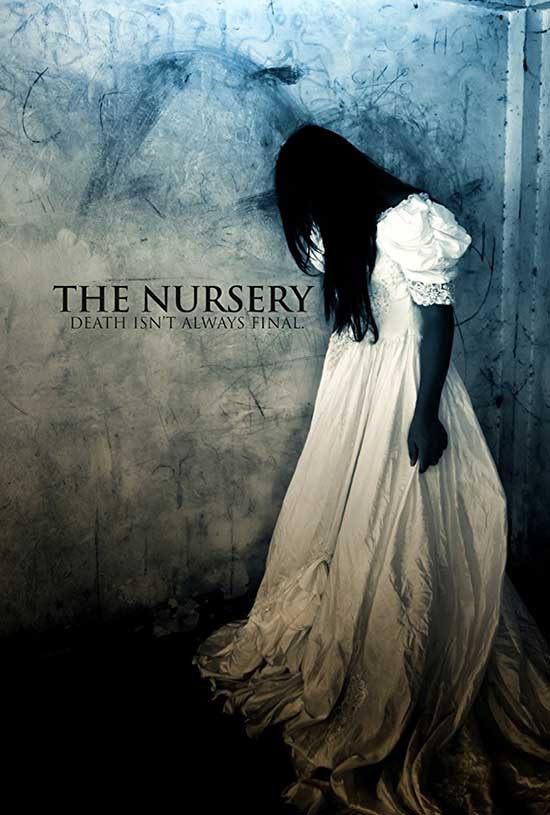 (I would have been gone by now. Friends or not, if you trip, fall, go to investigate. I am leaving you. No offense.) The father is texting to see how the kid is doing or is he…..??? The self-investigation of the basement again is creepy. Nadia P. Horner portrays Rose.

Between the basement, the people, the creepy nanny, possible scary kid and the paranormal investigating brother. There is a lot happening. The house has been a true character in the film. The aspects of how freaked out the actors are and how well they are playing scared it is good. (Samara? Is that you?)

Ranae is brave, that is a sure thing. As they say, you need darkness for the light to appear. This was a good film. A lot of suspense, great references to horror classics but not too overwhelming. The ending is unreal though. It sort of seems predictable at first but provides a good surprise. (I didn’t say a nice surprise) Let’s just say Ranae’s version of the boogeyman is different than Jamie Lee Curtis’ version.