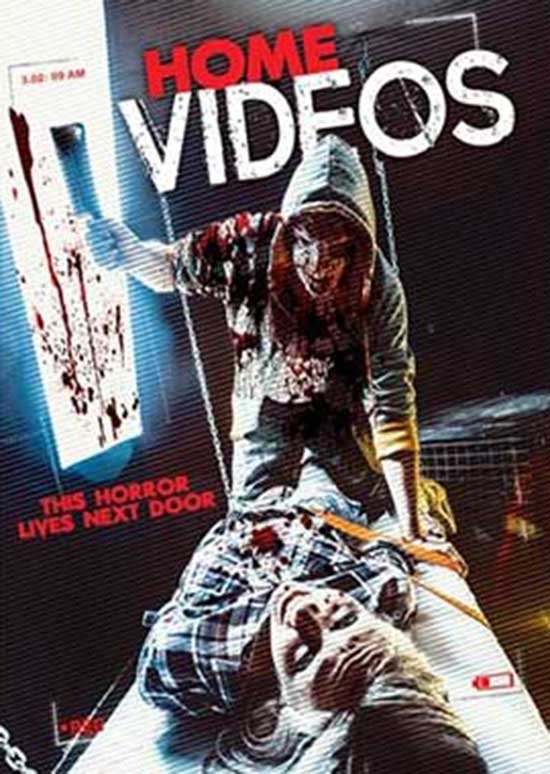 Some anthology films feature a wraparound story that weaves its way through from beginning to end; others feature a host who appears between segments to wisecrack and introduce the next story; and in some, one story begins where the previous ended, and ends where the next begins, and so on. And then there’s Home Videos, which stays true to its title by pretty much playing straight through, no filler, no hosts, just like an old VHS tape that had been recorded on, then had pieces recorded over. This movie is a Trash Arts/Vestra Pictures joint effort, which probably gives some of us a hint right up front as to what we might expect from it, and those expectations will probably be met. 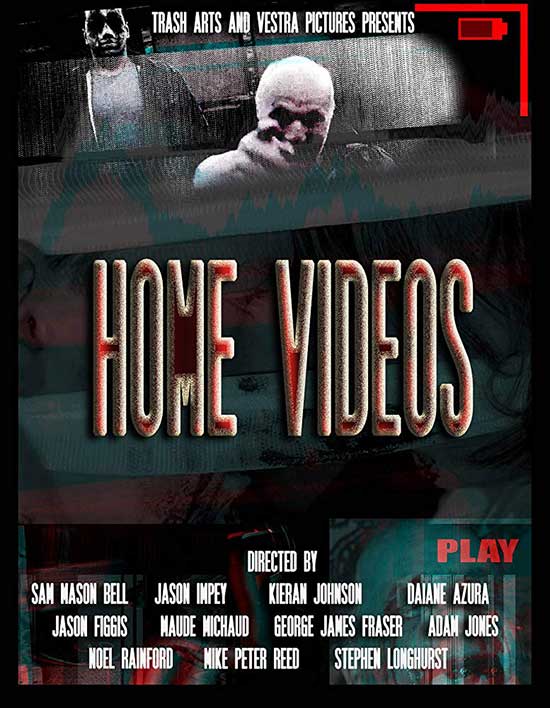 The opening segment of this anthology is a unique one: “Case 019684,” written and directed by Jason Impey (Sick Bastard, Troubled), shows the contents of a VHS tape Jason Hess (Impey) used to record himself killing his wife. However, he recorded over old home movies, so scenes go from a guy taunting his wife to an older woman holding a baby, or a small boy playing with a kitten, then back to the man taking a drill to his wife’s arm. It essentially shows us the progression of this killer, from a small child (if I understand correctly, the “home movie” portion of this segment are actually those of Jason Impey as a child) to the killer he is today. While the fabricated story around this segment isn’t the most detailed, this is a distinctly original concept for a horror story.

Note as far as the order and structure of the films in Home Videos: Some of the stories overlap, abruptly ending for a bit while another segment plays, then coming back and finishing up later. This makes things a bit confusing at times. For example, there might be a segment called “Baby Food” written and directed by Britmic somewhere within “Case 019684,” but the footage all blends together. Maybe “Baby Food” is the random scenes of two girls wrapping a couple in saran-wrap and stabbing them, then later making out while covered in blood? And if not, what are those from? Another story, “We All Dread” by George James Fraser, starts around the 40-minute mark, then comes back after a couple other segments, then again near the end. And knowing is half the battle… 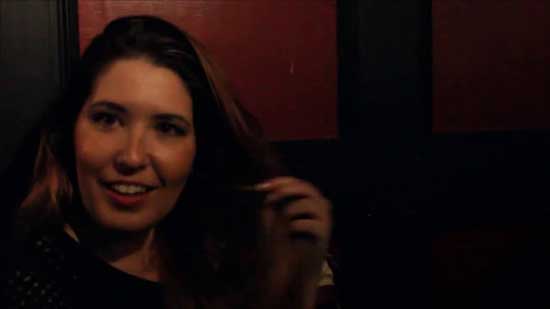 “I See You,” by Canadian writer/director Maude Michaud (Dys-, segments on the Women in Horror Blood Drive films), is simple but clever, as we watch from the POV of a home intruder as he watches a woman from her closet, then prepares to attack her with a knife. But this doesn’t play out the way a normal slasher film would.

“Mordor,” directed by Kieran Johnston and written by Johnston and Jason Impey, presents the audience with a POV from the ground. We watch as a man sees something there and approaches to investigate. What we see that he doesn’t is a man in a mask behind him. Similar in approach is “The Watcher,” written and directed by Steven Longhurst (Dr. Macarbre’s Tales of Terror). A man finds a camera on a walking path and check it out. He presses PLAY and watches a video of a woman at a birthday party, then at the beach, and then in her underwear, crying on the floor. Then the owner of the camera comes along. There is also “Bury,” by Noel Rainford (Desolation, Easy Target). Here we have a man in a ski mask dragging a body into the woods and quoting the bible as he digs a hole. These three could all be different scenes of the same film – “Mordor” and “The Watcher” might be the same killer, and “Bury” might be part of the from “The Watcher.” Not to say they all blend together… 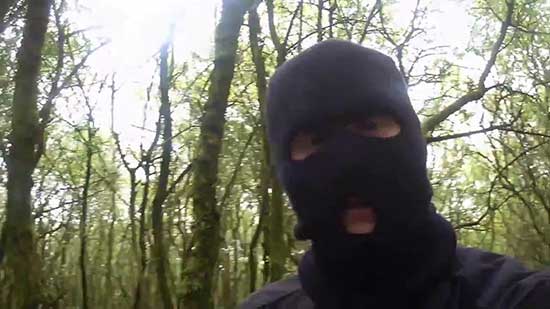 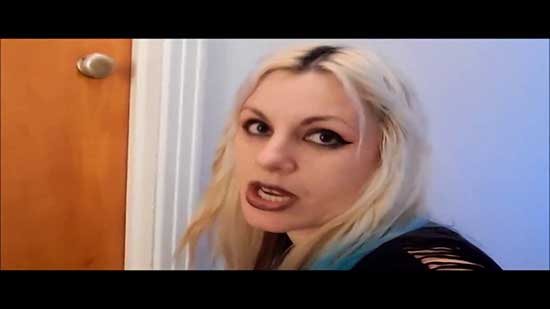 “Knock on the Door” by Daiane Azura (actress and composer, this is her directorial debut) is the simplest, probably lowest budgeted film of the bunch, but that doesn’t mean it doesn’t work. An attractive blonde (Azura) talks to the camera, explaining that she’s been hearing noises in her house. Soon, a knocking sound begins, and she searches for the source. She discovers it’s coming from behind a locked door for which she has no key. Cue tension. It’s not perfect nor is it complex, yet somehow it stands out in this collection.

“Scratchy Eyes” by Sam Mason-Bell is an effectively creepy short showing a family on a young boy’s birthday. Dad films the events of the day, but what he doesn’t notice as he’s filming is a man in the background, hidden just enough not to be obvious. Whoever he is, he starts appearing more frequently, and suddenly the boy is missing and Mom and Dad search for him. This is probably the creepiest one, but it also has the worst moment of the film, when the title appears on screen and it is spelled wrong. That should have been caught, guys.

“The Almost Daily Journal of a Madman and His Female Assistant” by Jason Figgis features a guy who got home early from work and found his wife in bed with his friend, so he killed them. From there, he and a different woman take out their anger on some people in a car. Not much to this one, really, just some violence and madness. 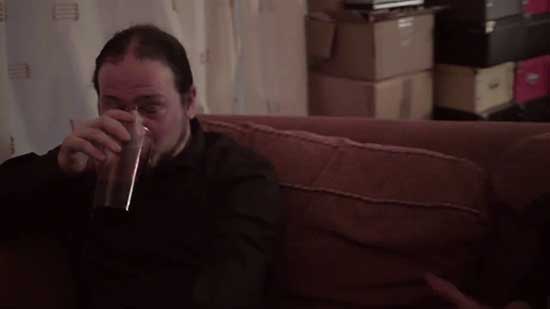 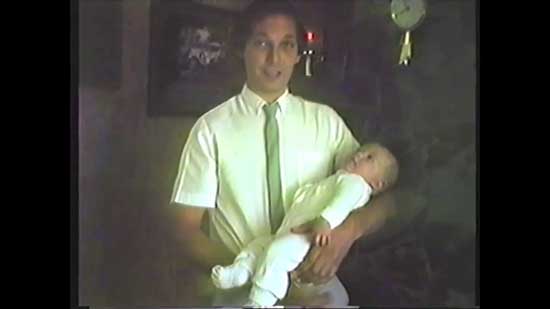 Back (finally) to “We All Dread.” The concept is simple: two guys filming a documentary about fears go out to bars and ask random people what they are afraid of. They run into one guy who is not at all excited about being on camera. At a different bar, they run into him again, and he tells them they don’t know anything about fear. When the guys have drinks with some ladies they met, things start going badly for them. They say bad things come in threes… And to close out this whole thing, “The Interview” by Adam Jones features two women (Suzy Weatherall and Marina Akarepi) interviewing an alleged vampire. They are skeptical, and he’s crankier by the minute as they ask “dumb” questions. It isn’t hard to guess where this one will end up. 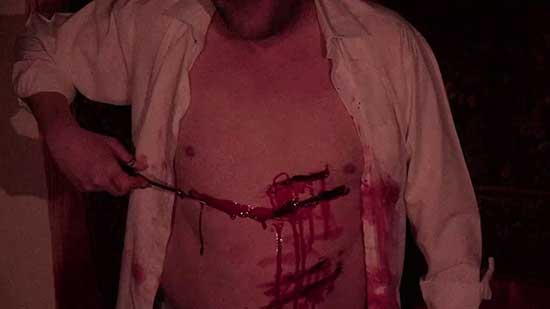 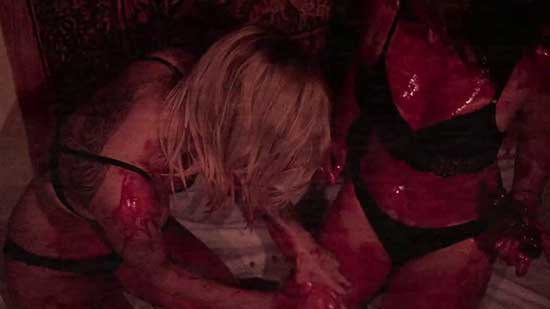 Home Videos is a very mixed bag of horror goodies that kind of goes all over the place. The concept of having some segments broken up over the course of the film is both innovative – that seems how it should be set up, doesn’t it? – and at times irritating – what is “Baby Food”?!? Some segments are much better than others, but there are definitely a handful of quality shorts here for the avid horror fan to appreciate. Lots of familiar directors involved, a couple newer names, and a display of how much horror can be created for very little money – exactly what you’d expect from a Trash Arts anthology.