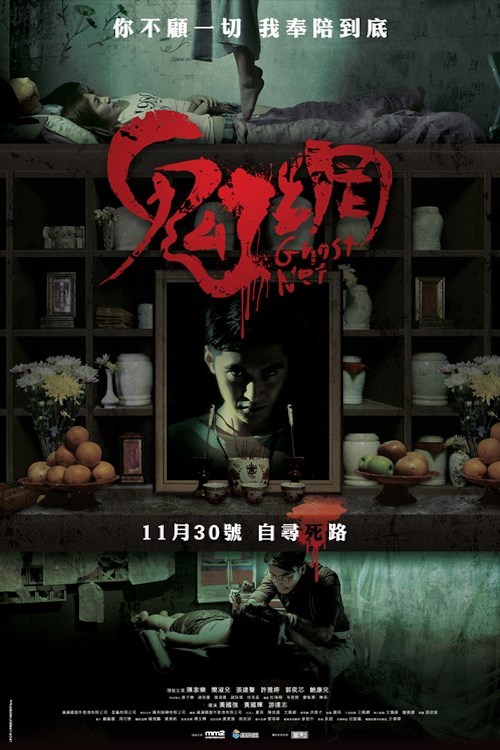 The movie features three ghost stories set in Hong Kong, beginning with Vivian, who, after moving into a new place, gets involved in spooky incidents with her neighbors. The next story follows Scarlet, who unknowingly receives a tattoo with sinister secrets. The final story is about a group of university students, who awaken the vengeful spirits of a dead couple while live-streaming their ghost hunting expedition.

I do love a good anthology. I feel like there is always an added bit of suspense and excitement in watching a great omnibus; you never quite know what the next story will be like, and even if the previous segment sucked, the next one might just redeem the whole compilation. When thinking about great anthologies my mind automatically goes to Amicus productions and such films as The House That Dripped Blood (1971) and From Beyond the Grave (1974), as well as the 1963 Mario Bava classic, Black Sabbath. There is of course good reason why those particular films come to mind first; they are not only great omnibuses, but also firm personal favourites from my younger days and as such give me that lovely warm and fuzzy feeling when ever I watch them. However, in more recent years, I have found a quite a few decent horror anthologies produced in different parts of Asia that have inspired me to seek out some more. To mention a few, films like Three…extremes (2004), Unholy Women (2006) and 4bia (2008) and Phobia 2 (2009) have certainly earned their place in my personal film collection. With these films (and many more) in mind, I was quite excited to embark on Ghost Net and see what kind of horrors Hong Kong could deliver me.

Ghost Net consists of three segments with no interlinking frame story between them. This itself is not a problem as such, although I personally often find myself preferring anthologies with a solid framework or a common theme running through them. The stories vary from quite sombre to downright silly, but unfortunately none of them really shine brighter than the others. Instead Ghost Net offers three mediocre ghost stories, none of which really stuck in one’s mind.

The first story titled Crowd You Out tells a tale of a young woman, Chan Wai, forced to move in a somewhat dicey apartment building, with even dicier neighbours. On the backdrop of the story looms Hong Kong’s housing crisis and the story obviously has some sort of commentary on the issue. Unfortunately, the finer points of this segment were slightly lost on me due to the poor quality of the subtitles. It is a shame too because in different circumstances Crowd You Out might have end up being my favourite of the three stories. While not overly scary, it had a few genuinely creepy moments and I enjoyed to overall atmosphere of the story. Besides the housing crisis, there were other details to the story that seemed significant (like the flat next door full of urns. What? Why? Who?) and which aroused my curiosity, but sadly the subtitles and just plain lack of translation made the story very hard to follow and I will freely admit being completely lost by the end of it.

Second story, Double Body, is the melancholiest of the three but luckily easier to follow than the previous one. In it a frustrated young woman gets a magic tattoo in order to keep her boyfriend interested, but as so often is the case in these situations, ends up getting more than she bargained for. It’s a story of loss and desperation and the lengths that people are willing to go to, to get what they want. While sombre storylines have their place in the horror canon and often find their way in to anthologies, they also generally tend to be my least favourite kind of stories and Double Body isn’t much of an exception. That being said, this segment actually has the best ghosts of all three stories, few of them really quite eerie and unexpected. The production values aren’t amazing, but at least they are not just simply actors with a dull look on their faces. Again, the subtitles let me down somewhat and some minor details were left slightly hazy, but as Double Body was fairly straight forward story, it didn’t bother me too much. Even though I did find this segment quite frankly a little bit depressing, I enjoyed the story more than I usually do with stories of this kind.

The final segment, Horror Online, serves as the comic relief in the end of this omnibus. That being said, I wouldn’t exactly call it funny, but it is certainly much more light-hearted than the first two stories. In it we meet a couple of young entrepreneurs running a ghost hunting website. While their newest video goes viral, they soon learn that some things are not meant for the public eye.  I was quite looking forward to this segment, hoping for a few laughs intertwined with a bit of gore. Regrettably I didn’t really get either. While Horror Online is definitely not overly serious and aims to gross out its viewers, neither the comedy or the scare effects work awfully well. The comedy feels childish and the special effects are by far the worst ones of the lot. In some instances, the quality of the effects might have been an intentional choice to add more comedy value, but instead they just give the whole story a cheap and derivative feel. Out of the three stories this one was definitely the weakest and personally my least favourite one.

Unfortunately, Ghost Net does not reach the same heights as the films I mentioned in the beginning of this review. In fact, it doesn’t really even come close. It’s just too disposable and unmemorable to really make its mark.  Maybe with better subtitles and full translation of all the significant text, I might have enjoyed it more, but over all as anthologies go, there are better ones out there.