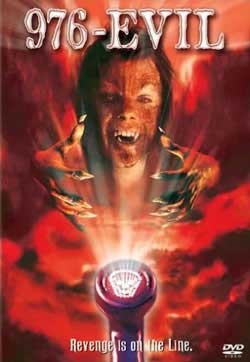 All hell literally breaks loose when young Hoax runs across a “Horrorscope” number that changes his miserable existence in the worst way.

Before going to a life of gay p*rn Stephen Geoffreys committed himself to two of the 80’s greatest gems, those being Fright Night and this little beauty of a monster flick, 976-EVIL. Now in this movie Stephen plays an outcast whiny little mama’s boy, Hoax Wilmoth. Seems Hoax doesn’t have a friend in the world but that doesn’t get him down, his overly religious mother Lucy loves him dearly and takes very good care of him, as long as he’s living for the lord and not eating anything on the couch. His cousin Spike lives in his back yard and provides him with what all perfect role models should give to their followers, bikes, broads and beer. Hoax is completely obsessed with Spike’s life, so much that he tries to be just like him, like when he puts holes in the muffler of his scooter so it sounds like Spike’s motorcycle, trying to act tough like Spike’s friends, who ultimately flush his head in the school toilet, until Spike comes to save the day.Hoax just wants to fit in with with his badass cousin.

As the story goes, one night as Spike is relaxing in his room, after losing a assload of money in a poker game with his friends, reading a magazine an ad pops out for a Horrorscope Hotline. Well Spike’s curiosity gets to the best of him and he calls the number. A voice comes on the phone and gives him his fortune, convincing him that he’ll soon not have any money problems, which persuades him to steal some of his inheritance from Hoax’s mother’s cabinet but he gets caught in the act by Lucy who runs him outside with her mighty god powers when out of nowhere it starts raining fish! Well she takes it as a sign from god to show Spike away from his evil ways and yadda yadda.

So the next day a cop named Marty Palmer comes around claiming he works for some religious magazine and questions Lucy about the raining fish incident which spikes his curiosity into following Spike. Well good thing he does because Spike goes to the auto shop for a part for his bike when he decides to call the hotline again, this time it tells him to steal a pair of expensive leather gloves from the shop which he starts to do then changes his mind and goes outside to his bike. Then the phone rings. He picks it up and the same voice that tells him that he should take what he wants repeats himself. Well Spike gets pissed and hangs up then walks off. Well next thing you know a car down the street starts on its own with no driver and heads right at him but his ass is saved by the nosey Marty.

The next day back at school Hoax is introduced to Suzie, Spike’s “flavor of the week”, which he takes a real shining to. Anyways later that night Suzie and Spike are having sex in Spike’s place when they end up running off to the movies after Hoax ruins the mood with his spying through Spike’s window. Anyways Hoax goes to investigate Spike’s empty room, finding Suzie’s panties and the ad for the hotline, so he calls it up thinking its some joke and it too tells him what he wants to hear, that his dream girl awaits him at a late movie, which is where Spike and Suzie are. So after a big argument Spike and Suzie have at the theatre when Spike goes off to gamble with his pals, Suzie decides to leave and is confronted by Hoax, who ends up going to have pizza with her. Well the hit it off fine until a spider comes across the table and scares the sh*t out of Suzie. Hoax takes the spider to the door to let it go but Spike’s pals show up, stomp the spider and ruin their little pizza party. After tossing Hoax on the floor one of Spike’s pals finds Suzie’s panties in his back pocket which pisses her off and she runs away.

Back home a pissed off Hoax decides he’ll call the hotline again, this time telling him to do a ritual to teach her a lesson which he does, ultimately killing her in a really badass way. From then on Hoax goes into this transformation, turning into a sick, twisted demon bent on getting his revenge on the people that made him look like a chump. As far as the rest of the movie you’ll just have to see for yourself but just know that it doesn’t disappoint. I don’t want to tell you too much, but you have to admit, sounds pretty damn good at this point doesn’t it?

976-EVIL is definitely a movie to define it’s time at the closing of the 1980’s, the styles, the hair, the clothes, all of it. The only thing I found annoying about the movie is the constant phone ringing in most of the scenes, it kinda got tiring after a while but what can you do right? Anyways the entire cast was pretty damn good, there were really no “hang-ups” to the movie and the ending was pretty kickass. I really like how Robert Englund puts a big emphasis on the religious aspect of the movie, that being mainly through the Aunt Lucy character played extremely well by Oscar award winning Sandy Dennis.

If you’re big into 80’s horror flicks for their novelty and humor definitely give 976-EVIL a run, it’s a great flick. You’ll love the quirky little one-liners and just about everything.