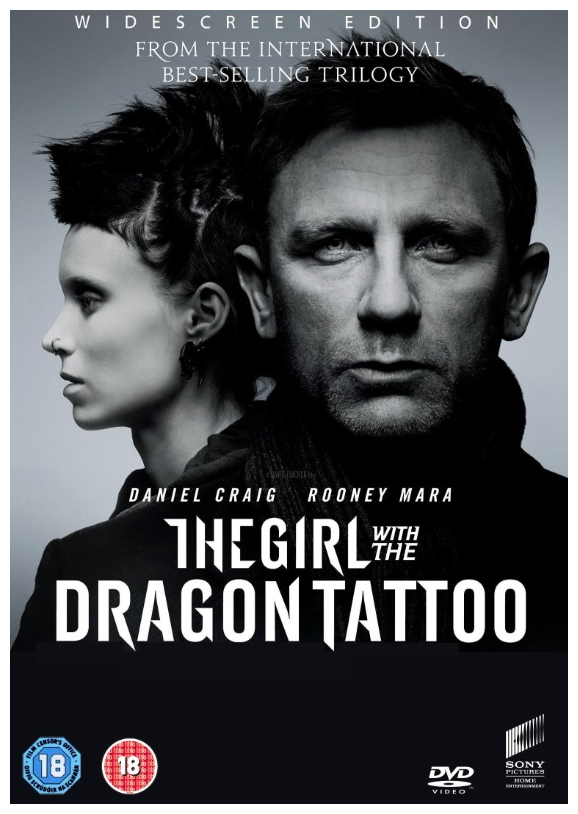 “After being successfully sued for libel by a wealthy industrialist, investigative journalist Mikael Blomqvist leaves his magazine Millennium and accepts an offer from Henrik Vanger to write the Vanger family history. An old industrial family, the Vangers have their share of skeletons in their closet. What Henrik is most interested in learning however is what happened to his niece, Harriet Vanger, who he is certain was murdered by a member of his family in the summer of 1966. Mikael takes on the task and moves into a small cottage on the Vanger estate. He begins to decipher some of the clues Harriet has left behind and decides to get an assistant, computer hacker Lisbeth Salander, the woman who did the very thorough background check on him for Vanger. Together, they learn of some of the Vangers’ deep, violent secrets.” (courtesy IMDB)

First published in 2005, the success of Stieg Larsson‘s novel The Girl With The Dragon Tattoo created a lot of interest in a movie version, and the popularity of the 2009 Swedish film adaptation was enough to entice Hollywood. By December of that year, an American adaptation had been green-lighted and Steven Zaillian, who had just finished the script for Moneyball (2011), became the screenwriter, while producer Scott Rudin coordinated a partnership with Sony Pictures. Sony executives wanted David Fincher to direct, and sent him a copy of the novel: “The ballistic, ripping-yarn thriller aspect of it is kind of a red herring in a weird way. It is the thing that throws Salander and Blomkvist together, but it is their relationship you keep coming back to.” Because Zaillian was already writing the screenplay, Fincher didn’t want to interfere and, after discussing the project, they decided that they were both headed in the same direction. 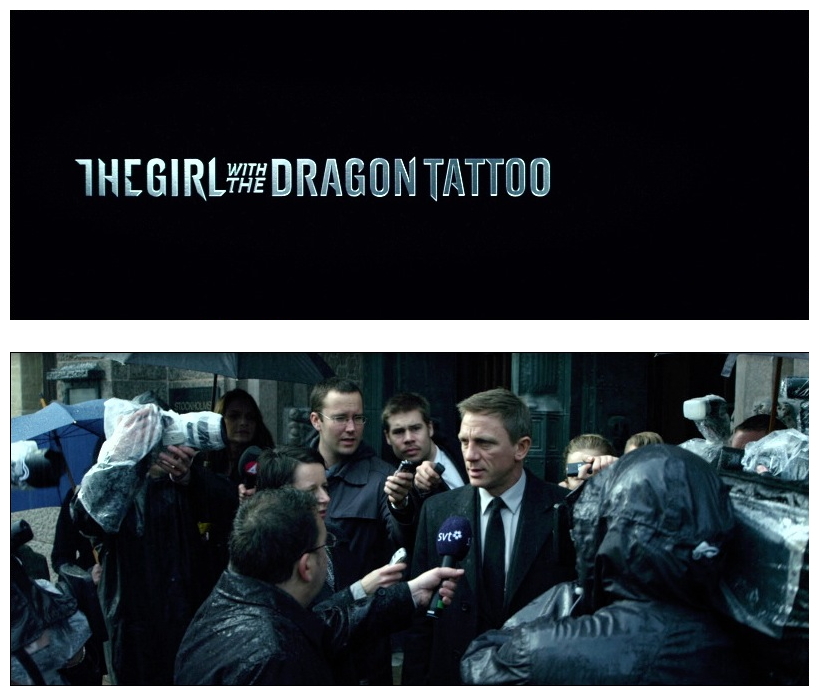 From the stunning title sequence – a cascade of nightmarish images set against Karen O and Trent Reznor‘s rendition of the Led Zepplin tune The Immigrant Song (“We come from the land of ice and snow…”) – to the alternative version of the story’s ending, Fincher’s version of The Girl With The Dragon Tattoo (2011) is a very different take on the Swedish thriller. “When I saw the Swedish movie I thought ‘Interesting, the movie I have in my head is different’. The reason that I felt people were embracing the book or were drawn to it, was this foreground relationship. It’s not a love story, it’s an odd, slightly perverse extreme friendship.” Fincher decided to make the relationship between Mikael Blomkvist (Daniel Craig) and Lisbeth Salander (Rooney Mara) central to the thriller’s plot. 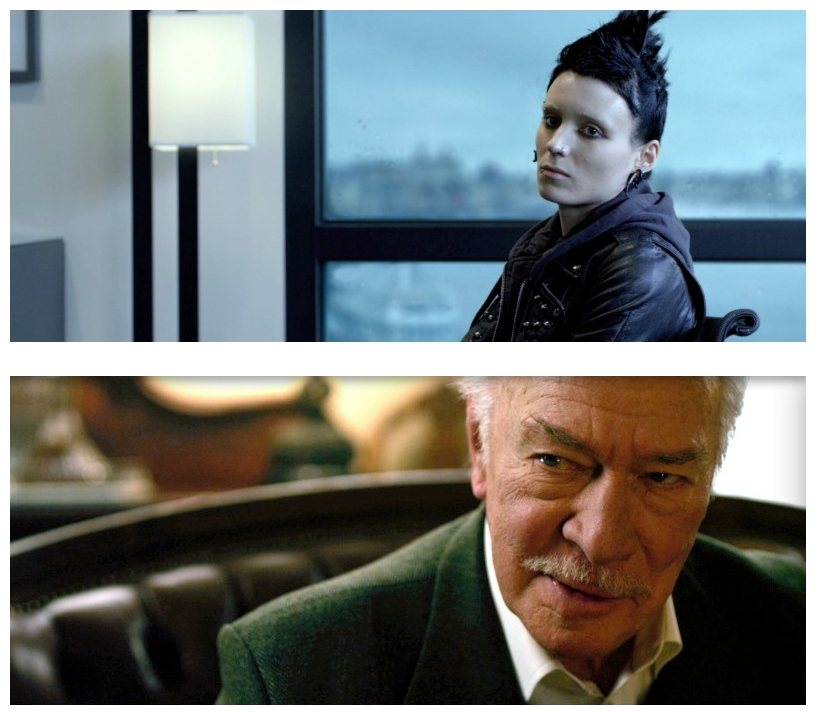 Fincher came to the American version of the film armed with credentials including Se7en (1995), Fight Club (1999) and The Social Network (2010) plus a preferred actress for the role of profoundly disaffected and damaged genius hacker Lisbeth Salander: Rooney Mara, who won an Oscar nomination for her fiery portrayal. Although he hadn’t imagined her for the part, after ten weeks of screen tests and auditions, Fincher persuaded Columbia Pictures to give Mara the lead role over Natalie Portman, Scarlett Johansson and Carey Mulligan. Fincher says he was equally challenged to cast investigative journalist Mikael Blomkvist, the other half of these odd-couple leads. Johnny Depp, Viggo Mortensen, Brad Pitt and George Clooney were all considered for the role. “We were very concerned we weren’t going to be able to find somebody who wanted to play the guy who gets his ass handed to him at the beginning.” 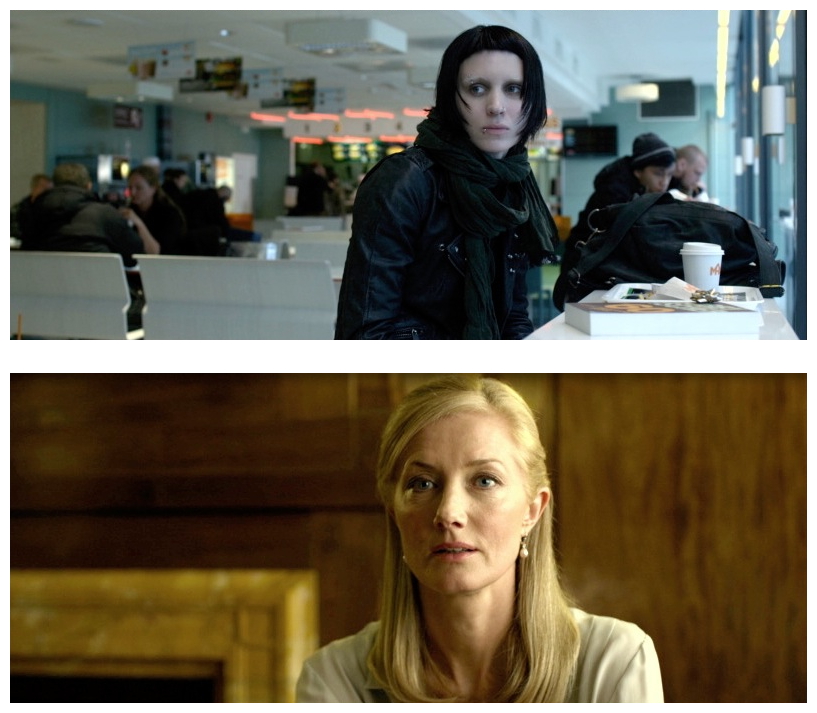 Playing against his James Bond cool-as-ice type, Daniel Craig gained weight for the role to remind himself and the audience that he was portraying a journalist, not 007, and wanted to appear as normal as possible, becoming a sweater-wearing ‘let-me-write-this-down-with-my-ballpoint-pen’ somewhat naive intellectual. Blomkvist enlists Salander’s help to solve the mystery of a missing grand-niece (Joely Richardson) of a powerful industrialist (Christopher Plummer). Blomkvist is unknowingly sucked into Salander’s totally guarded personal life is almost like an undertow or riptide, and the shift that occurs as she is drawn into his investigation is, in an odd way, important to her kind of salvation. The tension ratchets up as their discoveries explore the depths of the human psyche, with a number of boundaries inevitably crossed. Fincher makes the horrific assault that sets Salander on her path of retribution pivotal to the story. 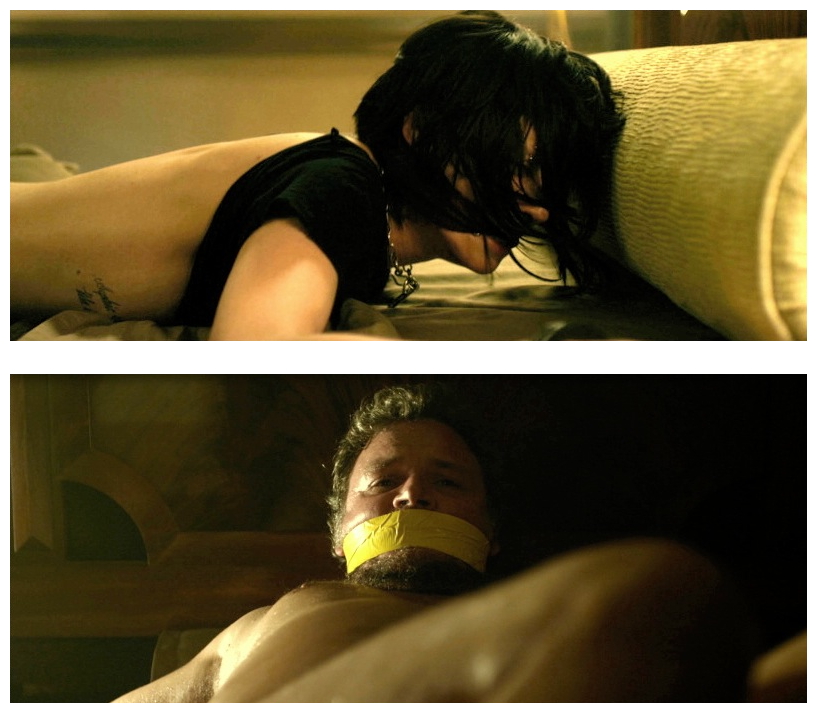 When she returns to her abuser she moves away from being a sympathetic victim and becomes something else. “Then, when we realise what it is that she’s done and how many moves on the chessboard she’s been able to look ahead, it’s a much more compelling and adult transaction than the I Spit On Your Grave (1978) way of thinking.” There are three plot strands in this mystery, and Fincher handles them deftly, producing a slick thrill-ride that plumbs the black depths of human nature amid an atmosphere of claustrophobic Nordic isolation. It’s unsentimental, unsettling, sophisticated and ultimately satisfying, delivered with the controlled coolness of a director at the top of his game. But the person to really watch out for, however, is Rooney Mara as Lisbeth Salander. Her first big role was as Nancy in the underrated remake of A Nightmare On Elm Street (2010) quickly followed by Fincher’s film The Social Network (2010), Mara has sealed her future with many more promising and exciting roles because of her portrayal of Salander. 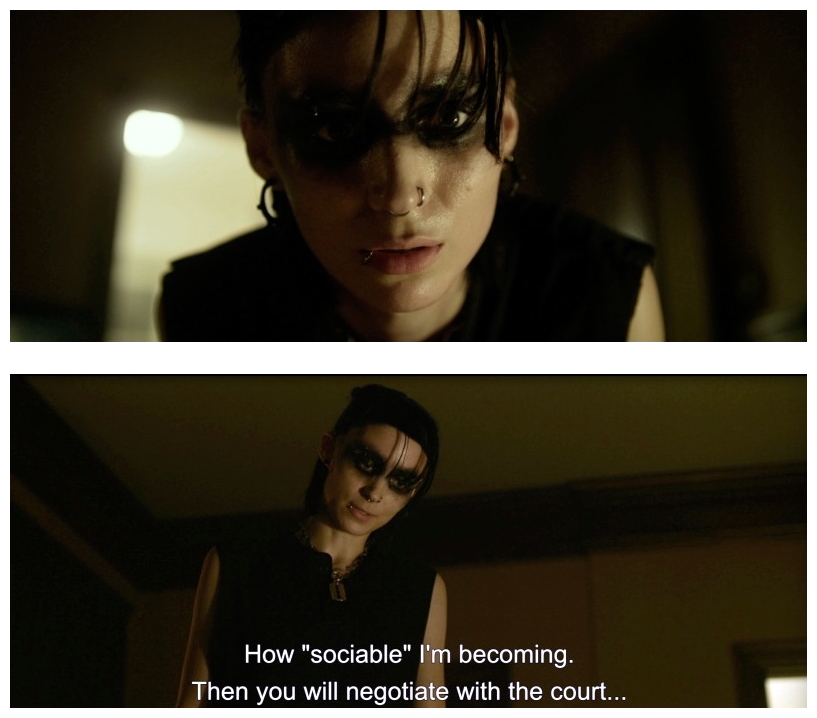 This was not an easy role to play, not least being the second person to play the character. She endures not one but two shocking rape scenes and a torture sequence, and there’s a quite a bit of nudity involved too. Most of the bruising seen on Mara’s body when she takes a shower, is real. The physicality of shooting the rape scene the day before resulted in countless bruises on her wrists, neck and torso. Mara is perfect as Salander, immediately bringing immense intimidation, danger and fury every time she appears on screen. Her piercings – multiple ear, eyebrow and nipple piercings – are quite real, not cosmetic simulations. Most of the piercings were removed after shooting completed, but she kept the right nipple piercing in case there’s a sequel. Although Fincher had not requested it, Mara decided to lose a substantial amount of weight, in order to give her character a bony appearance. She got so used to dieting during the shoot, that Fincher had to encourage her to eat during a dinner. 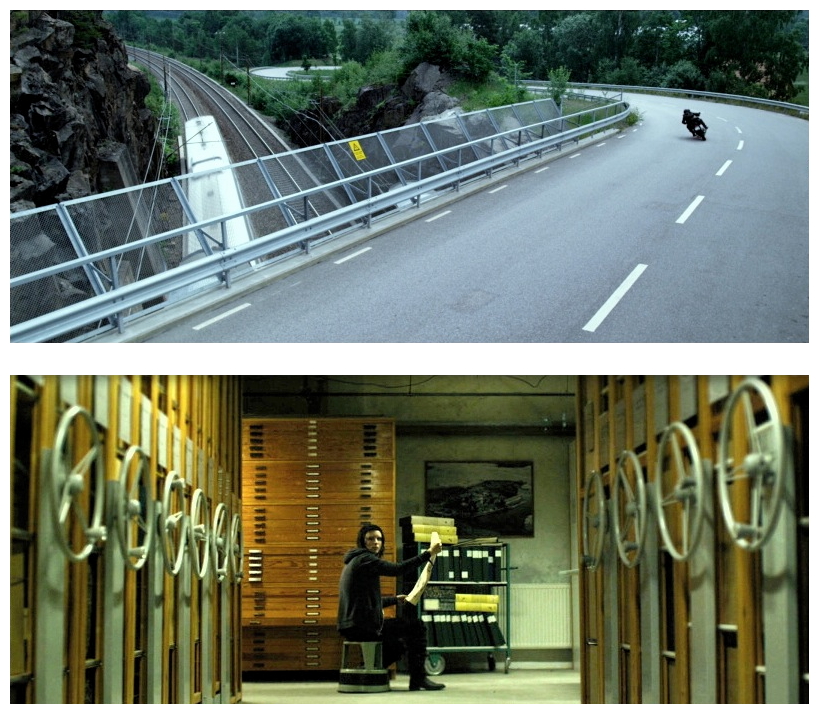 Her eyes are wide and emotionless and, with everything that has happened to the character, we understand that Salander has a right to be that way. She’s intelligent, but has absolutely no interest in relationships with other human beings. Mara gives a sensational, fearless, dedicated and electrifying performance that deserved the Oscar nomination that it received. Be warned though, The Girl With The Dragon Tattoo is definitely not a feel-good film. It’s a harsh, gritty and rough cinematic journey and, if you’re squeamish, you won’t be pleased. It doesn’t matter if you’re familiar with the novel or the original foreign-language version, or if you’ve never heard of it before, you should definitely give this one a look. Even without reading Larsson’s novel, I felt completely satisfied. Fincher has done it again! And now, as we crawl across the finish line of another review, I’ll wish you a good night, promising to see you again next week for more cinematic smegma than you can shake a schlock at for…Horror News! Toodles! 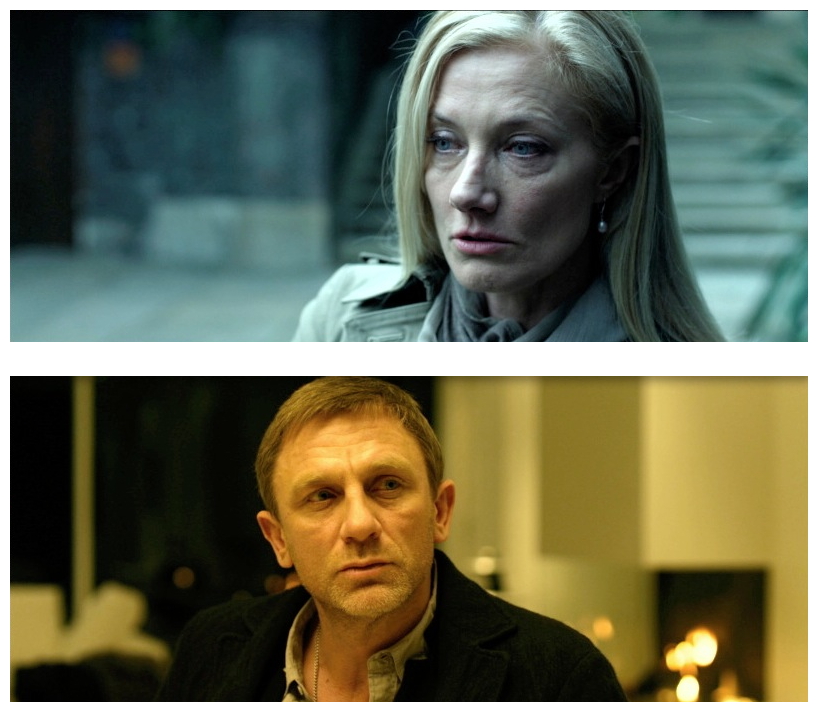