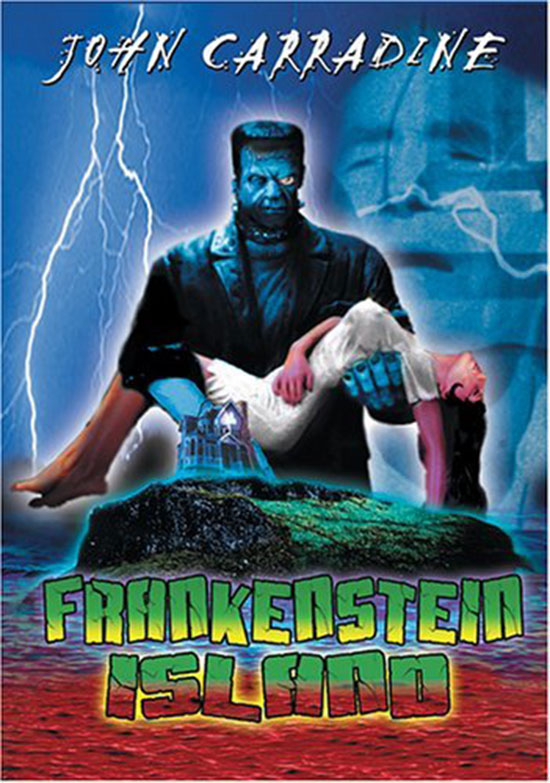 When a hot-air balloon crashes on a remote island, the crew discovers Dr. Frankenstein’s ancestor carrying on the family work, along with a race of mutants and a population of Amazons.

REVIEW:Today’s B-movie romp is 1981’s Frankenstein Island, which centers on a group of guys that were traveling in hot air balloons in hopes of breaking some records. However, they ended up crashing on an island populated with scantily clad women who are descendants of aliens who had secretly landed on the island years ago.

They also discover Sheila, a woman married to a 200 year old man (he’s also  a Von Helsing!) who’s being used to channel her ancestor, Victor Frankenstein. When she discovers that one of the men from the hot air balloons is a doctor, she brainwashed him to get him to save her husband. Meanwhile, Frankenstein’s spirit randomly shows up saying the same lines over and over again to the island women, his creation is locked in an undersea cavern trying to escape, and Cameron Mitchell is playing a Edgar Allan Poe quoting dude locked in a jail cell because his blood is vital for saving Von Helsing’s life somehow. 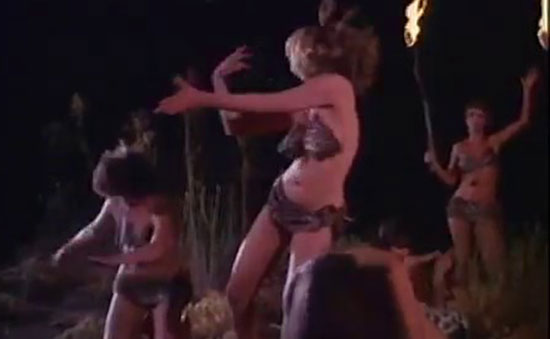 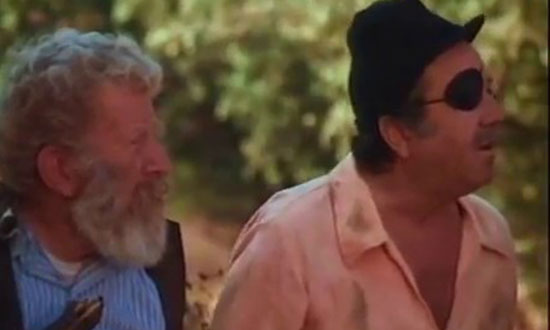 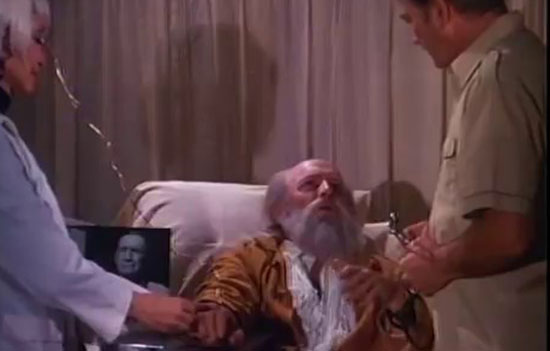 The film was written, produced, directed, edited, and scored by Jerry Warren. Warren started making movies in the ‘50s when drive-in theaters were looking for movies to put on the screen. This gave him the perfect venue to churn out low-budget films. The fact is that he wasn’t good at writing, directing, editing, or anything else involved with filmmaking and never showed signs of improvement despite having been a part of the industry for decades. This film shows the same jarring editing, nonsensical plot, clunky dialogue, wretched acting, and bad direction that have marred all of his works. He doesn’t seem to know how to make a cohesive story, so he just throws seemingly random events on the screen as if he’s trying to see what sticks. In the end you get a jumbled mess that makes you wonder what the hell just happened.

Onething that stood out to me is how quaint this movie seemed. This came out in 1981, when horror movies had become more violent, gory, and sexual. The slasher was becoming the king of the genre at the time. Frankenstein’s island, however, is tame in comparison. It’s bloodless and the minimal amounts of violence there is is both brief and cartoonish. If anything, this felt and looked like a movie straight out of the 1960s. It showed how much Jerry Warren was out of touch with modern audiences after having taken a break from movie making for 15 years. That’s not necessary an indictment of the film itself, but it struck me as odd that it would get screen time when fans had more or less moved on to grittier stuff. 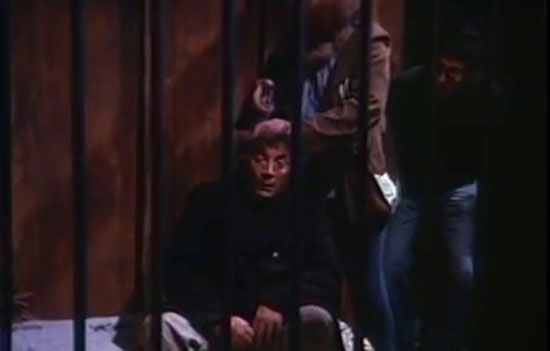 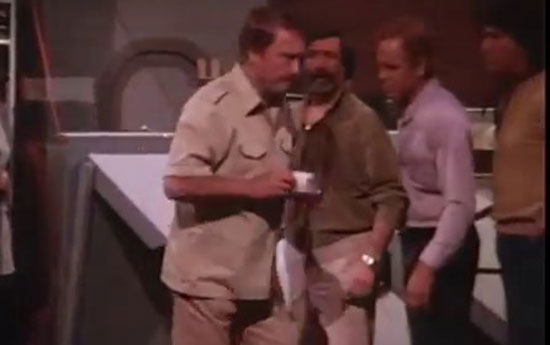 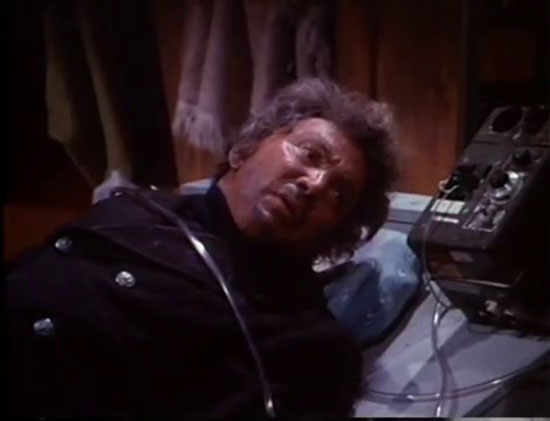 Like most of Warren’s other works, this flick is filled with terrible acting. The majority of the cast either acts like idiots, act like they have the emotional range of a brick, or go over top. It varies from actor to actor. Even Hollywood legend John Carradine, who played Frankenstein, can’t do anything to improve the quality. Of course, he’s wasted in this farce. All he does is randomly shows up as an apparition staring off into space repeating the same freaking lines over and over ad nauseum. His whole role in the film could have been completely cut out and the movie wouldn’t be affected at all. Also, they could have at least given him a wardrobe that befits a man that was alive in the early 18th century.

I must also bring special attention to b-movie stalwart Cameron Mitchell. This man had a long career, and his presence in a movie can either make it or break it. He can be a lot of fun and intense when motivated. It all depends on the answer to the question “how drunk was he during filming?”.

In some productions he appears to be sober. In others, it’s obvious that he’s plastered out of his mind. In Frankenstein’s Island, I’m willing to bet he was the latter. His character is supposed to be half mad, but there’s no doubt in my mind this guy was absolutely smashed. He slurred his lines and seemed like he was ready to fall asleep most of the time. He still managed to be interesting, I’ll give him that. 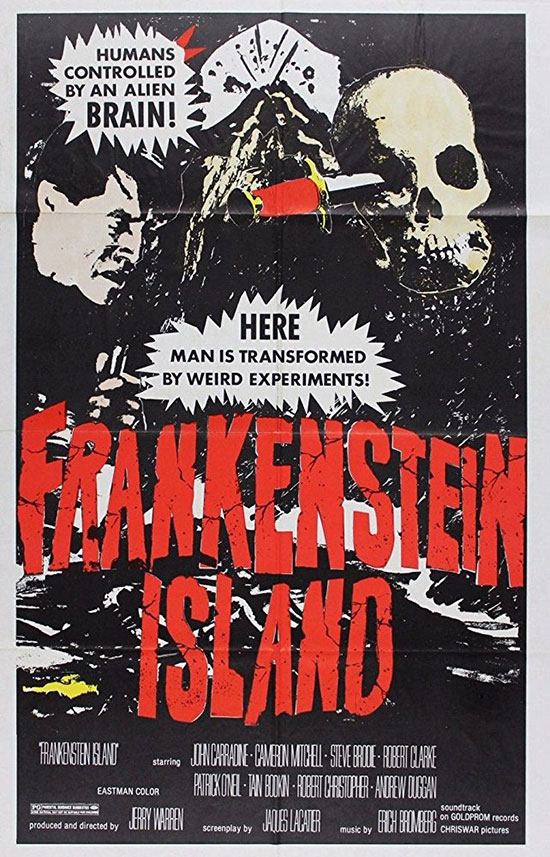 The production value of the film is absolutely cheap. Some of the props are not only obviously plastic, some look like they were bought straight from a corner drug store. The make-up for some of the people that get transformed into rabid creatures are laughably pathetic. You can literally tell that all they did was get some plastic vampire fangs you can buy at any Walmart and put them in the actors’ mouths. The sets sometimes looked like they were clumsily slapped together. What few special effects there were straight from the 1960s, as if Jerry Warren decided to ignore the leaps and bounds Hollywood had made since he last directed. 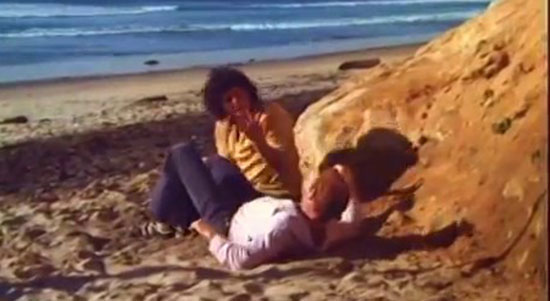 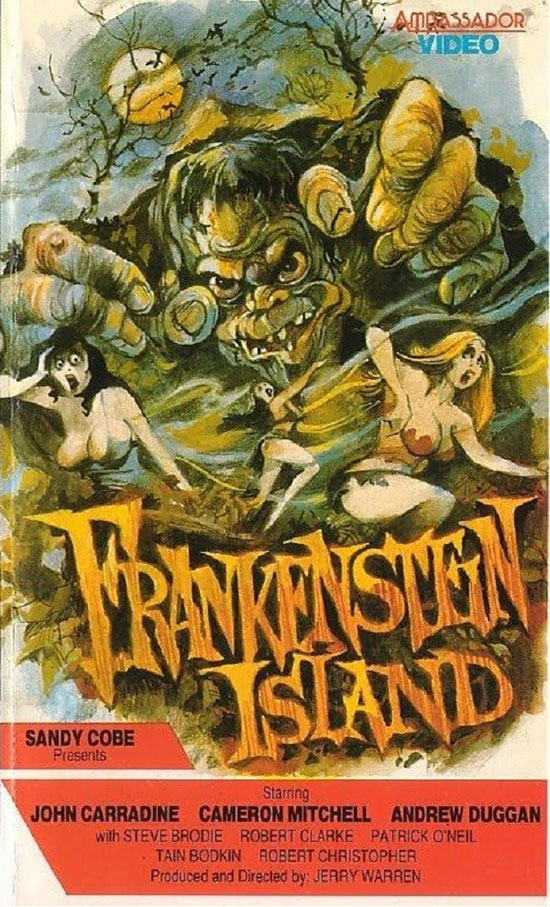 The one good thing about the movie is that it’s never boring. It’s a series of randomly slapped together scenes that almost tell a story. However, as events progress the film just gets more nonsensical and crazy. It builds to a frenzied crescendo that will leave you bewildered yet strangely entertained. If you’re willing to sit through the flaws just to see something that will keep you interested due to its sheer insanity, you can do worse than Frankenstein Island. You could also do much better.