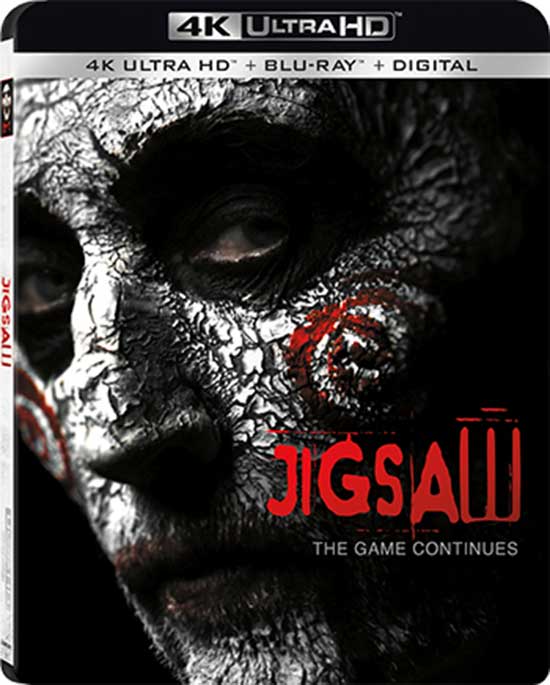 The Trap Is Set When Jigsaw Returns on Digital January 9

and 4K Ultra HD™, Blu-ray™ Combo Pack and DVD on January 23 from Lionsgate

4K Ultra HD™ to include both Dolby Vision™ and Dolby Atmos®

The Jigsaw Killer is back and taking his signature brand of twisted scenarios to the next level when Jigsaw arrives on Digital January 9 and on 4K Ultra HD (plus Blu-ray and Digital), Blu-ray Combo Pack (plus DVD and Digital), DVD, and On Demand January 23 from Lionsgate. Renown genre directors Michael and Peter Spierig (Daybreakers, Undead) and writers Josh Stolberg and Peter Goldfinger reinvigorate one of the most successful horror franchises of all time with their latest installment starring Tobin Bell (Manson Family Vacation, The Firm, The SAW franchise), Laura Vandervoot (TV’s “Smallville” and “V”), Callum Keith Rennie (TV’s “The Man in the High Castle,” “Californication,” Memento), Brittany Allen (It Stains the Sands Red), Matt Passmore (TV’s “The Glades”), and Hannah Emily Anderson (TV’s “Lizzy Borden Took an Ax”).

In the latest terrifying installment of the legendary SAW series, law enforcement find itself chasing the ghost of a man dead for over a decade, embroiled in a diabolical new game that’s only just begun.  Has John Kramer, the infamous Jigsaw Killer, returned from the dead to commit a series of murders and remind the world to be grateful for the gift of life?  Or is this a trap set by a different killer with designs of their own?

Immerse yourself within Jigsaw’s world with the release’s extensive Special Features, including an all-new 7-Part Documentary, an Audio Commentary with Producers Mark Burg, Oren Koules, and Peter Block, and “The Choice is Yours: Exploring the Props” featurette. The 4K Ultra HD and Blu-ray versions feature Dolby Atmos audio mixed specifically for the home, to place and move audio anywhere in the room, including overhead. The 4K Ultra HD Blu-ray also features Dolby Vision high dynamic range (HDR), growing Lionsgate’s library of titles featuring both Dolby Vision and Dolby Atmos. Dolby Vision transforms the TV experience in the home by delivering greater brightness and contrast, as well as a fuller palette of rich colors. Together with the captivating sound of Dolby Atmos, consumers will experience both cutting-edge imaging and state-of-the-art sound technology for a fully immersive entertainment experience.