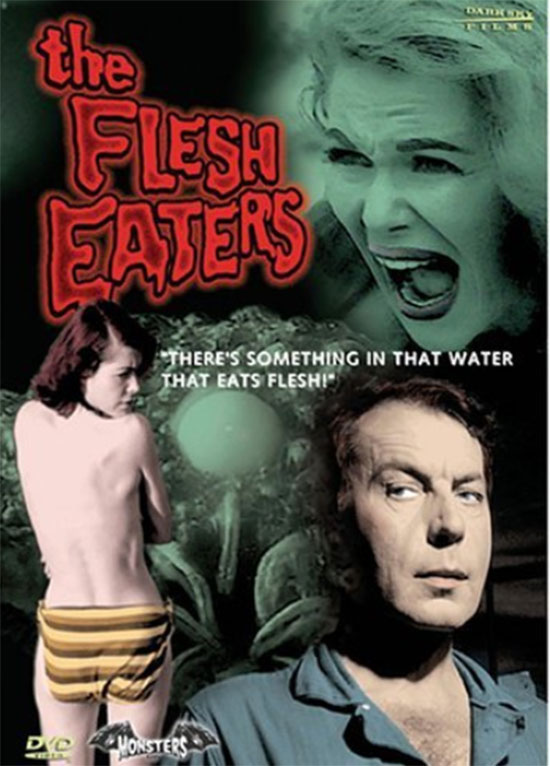 A charter pilot and his female passengers make an emergency landing on a remote island. But this safe haven turns deadly when they’re taken prisoner by a renegade marine biologist planning to unleash hordes of flesh-eating sea creatures onto the world.

You’ve got to love a movie that brings together Joseph Goebbels, Speed Racer’s dad, the director of The Opening of Misty Beethoven and the creator of Guardians of the Galaxy while showering the screen in buckets of black and white gore. With all that going for it you have to ask yourself, “So, why haven’t I seen THE FLESH EATERS?” Somehow, despite all its merits, this lively little film has slipped through the cracks. 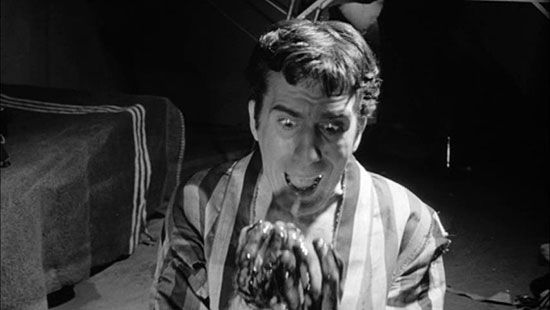 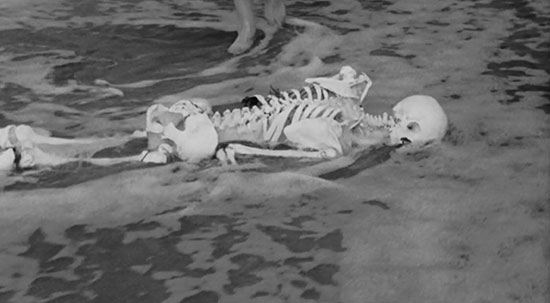 It’s the story of pilot Grant Murdoch (Byron Sanders), drunken actress Laura Winters (Rita Morley) and her good girl assistant Jan Letterman (Barbara Wilkens) who are forced to land on a seemingly uninhabited isle off Long Island, New York. But they quickly discover that creepy marine biologist Peter Bartell (Martin Kosleck) is also conducting research on the island. When a human skeleton and piles of devoured fish wash up on shore, the group realizes they’re in grave danger. They come to the horrifying realization that they’re being used as live bait in marine biologist’s’plot to unleash deadly flesh-eating organisms. Oh, and did we mention he’s a Nazi? Now the group must battle the flesh eaters and escape from the clutches of the evil Nazi scientist.

The Flesh Eaters was a renegade indie production directed by voice over actor and occasional cinematographer Jack Curtis. Arnold Drake, an underappreciated but extremely talented comic book writer, crafted the screenplay. Among his comic creations were the morbid superhero Deadman and The Doom Patrol, which was DC Comics’ shot at creating their own Uncanny X-Men franchise. Drake characteristically took the mutated superhero concept to a darker level, creating the era’s most self-loathing team of crime fighters. Ironically, Drake would go on to write about a dozen issues of X-Men for Marvel Comics. During his tenure at Marvel Comics Drake created the original series Guardians of the Galaxy. Although the movie franchise utilizes entirely new characters Drake’s original ensemble does make an appearance in Guardians of the Galaxy Volume Two’s end credits. 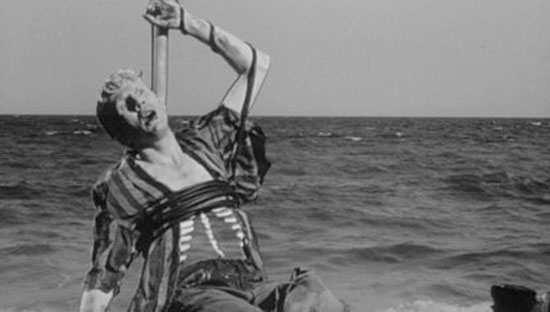 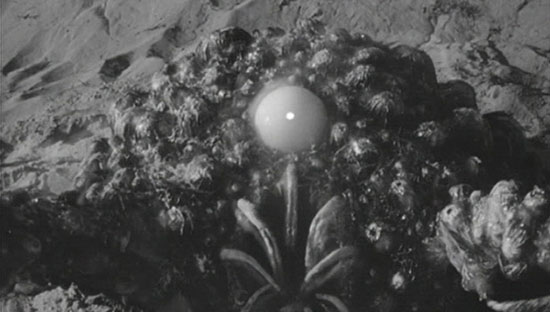 Drake’s gritty, cynical style is apparent in The Flesh Eaters’ ensemble of unlikeable characters. He gives us a drunken, washed up actress, a bitter, burnt out pilot, and a mentally challenged Beatnik. The characters are constantly at odds, spitting out venomous pulp novel dialogue. It’s like spending ninety minutes watching your relatives as they drown themselves at the open bar of a dysfunctional family reunion—except The Flesh Eaters is fun. Lead actors Byron Sanders (One Life to Live) and Rita Morely (Secret Storm, Edge of Night) were recruited from television soap operas, and their tendency to chew up the scenery synchs up perfectly with Drake’s hardboiled script. I particularly enjoyed Rita Morley’s liquor fueled Jekyll and Hyde transformation from self-pitying starlet to vicious harpy—clearly the screenwriter met a few genuine alcoholics in his day. Barbara Wilkin is also great as the nice girl, who just happens to look like an Alberto Vargas pinup.

But the movie really belongs to Martin Kosleck as Nazi sympathizing scientist Peter Bartell. Kosleck was a German refugee who fled Hitler’s regime for America—a wise idea as his Jewish heritage and outspoken hatred of Hitler had already marked him for death. He quickly became one of Hollywood’s go-to actors to play Nazis, including his most famous role as Dr. Joseph Goebbels— he played him no less than five times! In The Flesh Eaters Kosleck has a blast, summoning a career high in terms of low. I particularly enjoyed the scene where he tries to get chummy with Omar, the loveable Beatnik, but can only muster the warmth of a rattlesnake on a frosty night. The scene climaxes with Omar howling in agony as the title creatures gnaw their way out of him while Kosleck gleefully tape records his screams— Rough stuff indeed.

That kind of graphic gore is what really separates The Flesh Eaters from other horror films of its era— particularly the above mentioned pre Alien (1979) chest buster. This level of grisly monster attacks, bloody gunshot wounds, attempted rapes and random brutality was unheard of in 1964. The previous year’s Blood Feast (1963) had already opened the crimson floodgates. But that film was marketed as being for adults only, whereas The Flesh Eaters was unleashed on unsuspecting double feature audiences. Amazingly, this film aired virtually uncut on New York’s WNEW television back in the seventies, forever scarring my childhood psyche. What I really mean is … best movie ever! There was even some nudity courtesy of Nazi experiment flashbacks, but these tasteful scenes were only shown in certain “art house” theaters. You can see them in the DVD’s special features. 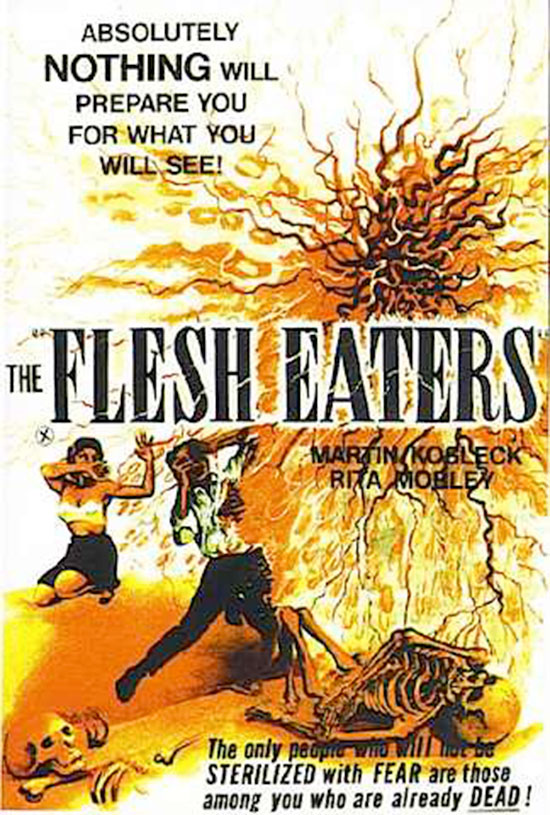 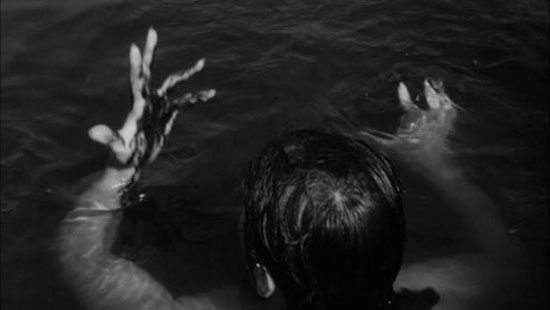 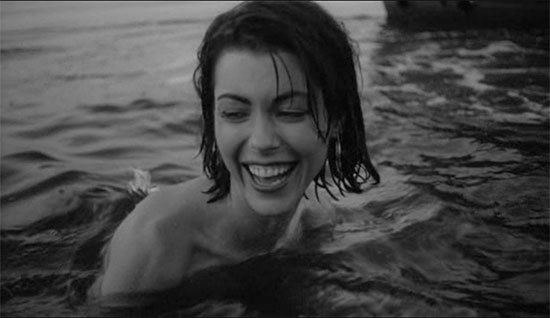 I have to wonder if including these spicy scenes influenced Radley Metzger, the film’s young editor. Within a year Metzger was importing foreign films and splicing in his own racy scenes for art houses. He progressed to directing glossy softcore films like 1969’s Camille 2000. He later changed his screen name to Henry Paris, directing six hardcore films, including The Opening of Misty Beethoven (1976), that are considered classics by film aficionados and perverts alike.

The Flesh Eaters’ stylish visuals were clearly influenced by comic books. Director and cinematographer Jack Curtis storyboarded the entire film, utilizing deep focus shots and stylized compositions rarely seen in low budget indie films. Curtis was primarily an actor, but a withered arm confined him to voice over work. Flesh Eaters was his only credited work as a director or cinematographer, which is remarkable considering how effective his camerawork is. How did a novice director and a comic book writer with virtually no motion picture experience get the financing to make such a crazy film? Amazingly, Jack Curtis’ wife, Terry Van Tell, provided the bulk of the financing for The Flesh Eaters. She was only able to bankroll the production because she’d just won $75,000 on a TV quiz show. Jack Curtis went on to become a popular voice artist in animation, including playing Speed Racer’s dad.

The strangest thing about The Flesh Eaters is, well—the flesh eaters themselves. In a bit of economic creativity the title monsters were created by carefully etching scratches onto the film’s emulsion. It’s incredibly cheap, but kind of artful and handmade. The little creatures eventually merge into a giant crab looking critter with electric tentacles. Consider that a bonus monster. 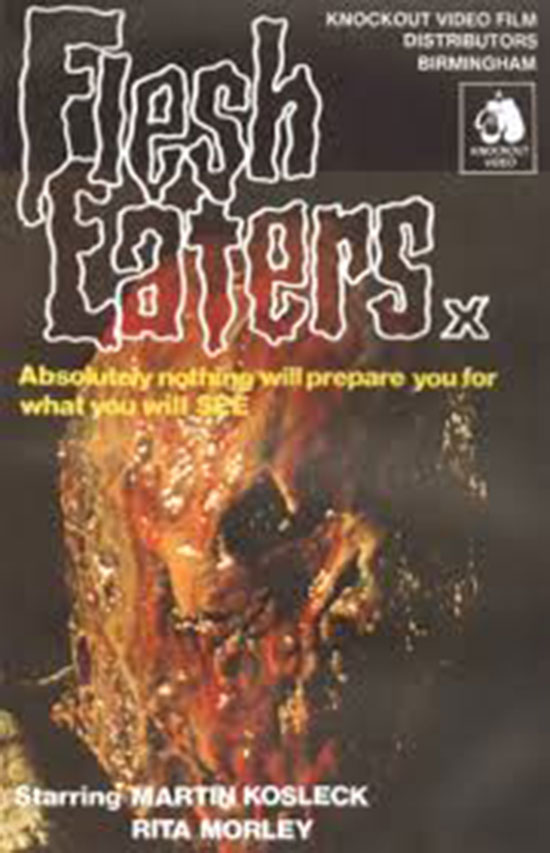 If the film’s ensemble reminds you of a certain mid-sixties sitcom you’re not crazy—we get a brave skipper (but he’s a pilot) a ginger style actress, a Mary Ann style good girl, a wacky Gilligan style Beatnik and a professor. Of course this professor is an evil Nazi, but I always suspected that was the dark secret of Gilligan’s Island.

In a funny postscript there was another film released after The Flesh Eaters entitled Night of the Flesh Eaters. To avoid confusion that filmmaker elected to change the title of his film to Night of the Living Dead (1968) and the rest was history.

I highly recommend The Flesh Eaters. It makes a perfect double bill with Roger Corman’s island bound Attack of the Crab Monsters (1957). You can cook up some prawns, open an Anchor Steam and make a whole nautical night of it!