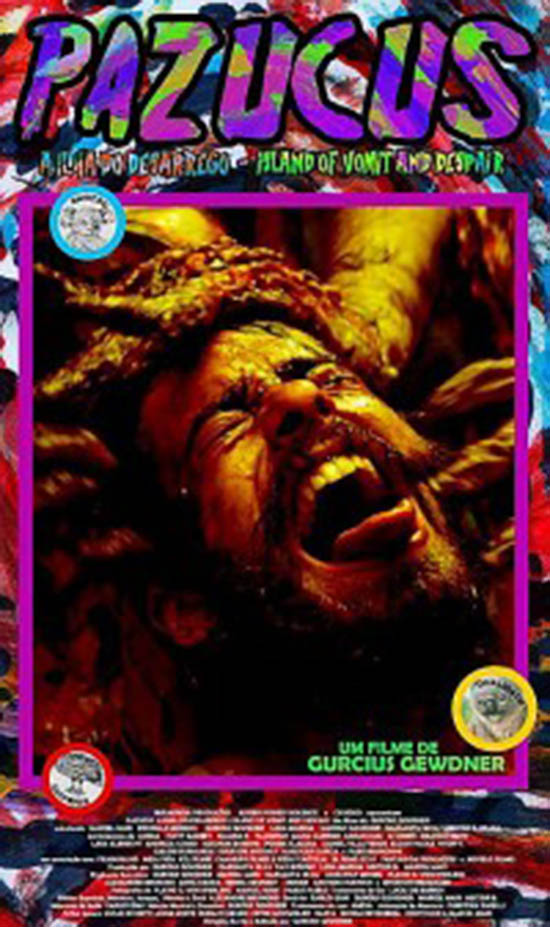 If you’re looking for criminally underrated horror movies from countries outside of North America, I highly recommend checking out the films of Brazil. Jose Mojica Marins is probably one of the most widely known directors from way down south, thanks to his Coffin Joe trilogy – At Midnight I’ll Take Your Soul, This Night I Will Possess Your Corpse, and Embodiment of Evil. But there are a number of more recent filmmakers from Brazil that are also worth checking out. There’s Fernando Rick, director of Feto Morto and the short film, Colecao de Humanos Mortos, among others. 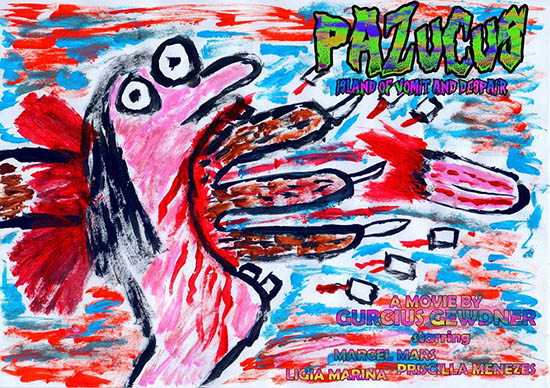 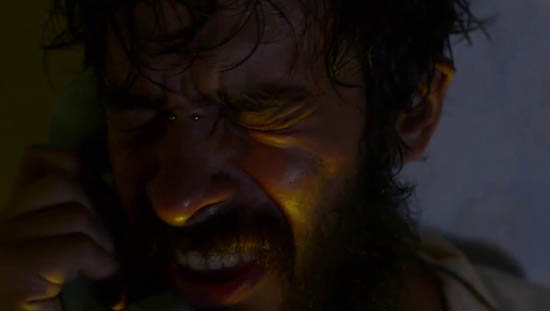 There’s the directing team of Rodrigo Gasparini and Dante Vescio, who brought us not only the short film, M is for Mailbox, which is featured on ABCs of Death 2.5, but also the Artsploitation release, The Devil Lives Here. And we can’t forget Petter Baiestorf, who has a long list of great low budget exploitation/horror films, including Arrombada – Vou Mijar na Porra do Seu Tumulo, Zombio, and O Monstro Legume do Espaco. And there are countless others as well. But today, we’re going to talk about a different movie, and a director whose name I have a feeling we’ll be seeing a lot more in the coming years: Pazucus: Island of Vomit and Despair by writer/director Gurcius Gewdner.

Pazucus: Island of Vomit and Despair, or Pazucus: A Ilha do Desarrego, is a film like none you’ve seen before. It’s a low budget exploitation film done so skillfully it looks bigger than it really is. It’s an art film version of a fart joke. It’s as much Roger Corman and Frank Henenlotter as it is John Waters and Nathan Schiff. It serves as a great taste of Brazilian exploitation filmmaking as well as an homage to Gewdner’s influences – parts of the closing credits are separated with “classic” movie titles (Long Weekend, Beach Party Bingo, etc), while another part is a list of cult heroes the film is dedicated to (from D’Amato to Zulawski, Mink Stole to Christoph Schlingensief and the Kuchar brothers). At its core, it’s the simple story of a guy (Carlos, Marcel Mars) who is being driven mad by the voices he hears coming from the poops brewing in his guts, and Dr. Roberto (also played by Marcel Mars) is searching for him. At the same time, we’ve got Omar and Orestia (Gurcius Gewdner and Priscilla Menezes, respectively) spending some time in nature and very quickly growing to hate it. Stir in an absolute ton of insanity, and you’ve got Pazucus. 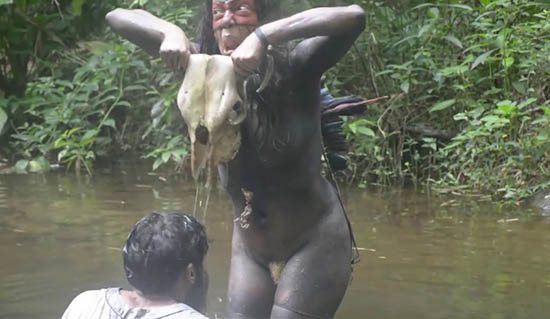 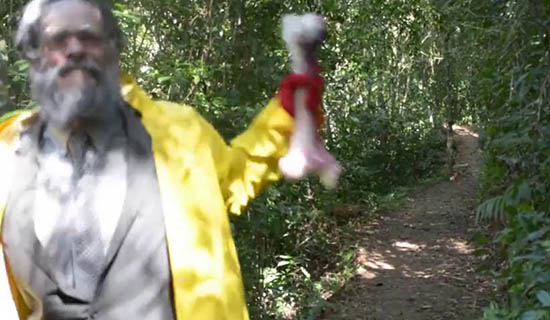 Where Gewdner’s film succeeds is in its balance between absurdity, dark humor, and disgusting visuals. We’ve got Dr. Roberto inadvertently going on a confused killing spree where he thinks almost everyone is Carlos, be it man, woman, or pet. Omar and Orestia shoot tree after tree in hopes of killing the nature that has repulsed them. Meanwhile, Carlos stumbles all over the place, from urban to rural location, puking up a rainbow of colors along the way – and inside Carlos, a group of turds discusses their part in bringing about the end of the world. Call it juvenile if you wish, this is some entertaining, borderline-genius filmmaking right here.

Without being very familiar with much of Gewdner’s previous work (I’ve only had a chance to see Orgy of the Devil and Other Forbidden Tapes of Ivan Cardosa, which is mostly directed by Cardosa, and the short film, Good Morning Carlos, which serves as a prequel/companion piece to Pazucus), I can’t really compare this film to the rest of his filmography. But in addition to a clear respect for bad taste, Gewdner’s finished work shows a lot of promise. The intro scene feels like an old White Zombie video, featuring a monster shining another monster’s shoes before others show up and violence erupts. All of this is done in purple and red and orange hues, and looks fantastic. There are even a couple of animation sequences that add a whole other level of creativity to this already unique film. The acting isn’t award-winning, and the costumes are very simple, but honestly that is part of the charm, and ultimately helps the film “work.” 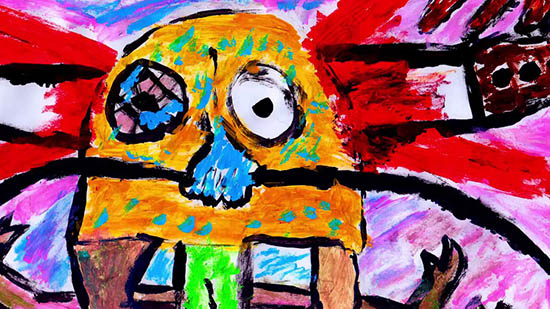 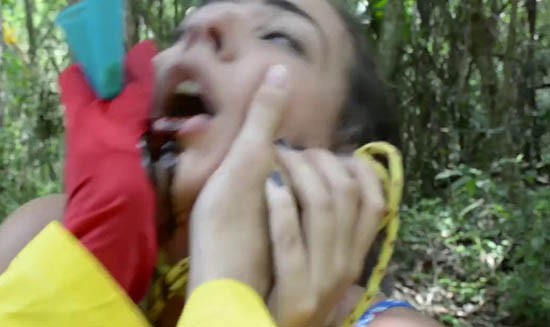 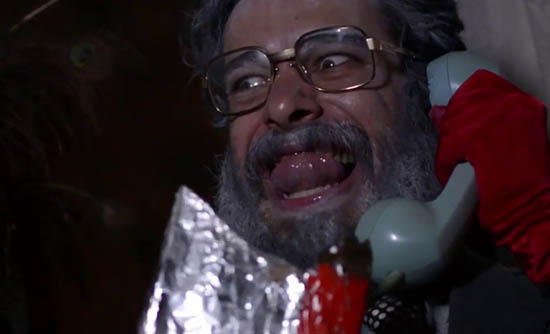 Pazucus: Island of Vomit and Despair is not a film you will soon forget. It’s a little like an old Mr. Bungle song: take a little of everything, throw it all together, and somehow you end up not with a pile of crap, but instead something amazing. There are poop monsters, there are gallons and gallons of vomit, there is a guy pretending to be a shark, there is a dance/party sequence, there are “death cuddles,” there is an epic, climactic fight sequence, and there is a fairly intense bit of grocery shopping. This film runs close to the two-hour mark, and on first examination would seem a little too long.

But after some reconsidering, there’s really not a single part that deserves to be cut. Hopefully this film finds a good distributor, because it is one that needs to be seen. Gurcius Gewdner is a name to remember, folks, and Pazucus: Island of Vomit and Despair is a film to keep an eye out for. Highly recommended.