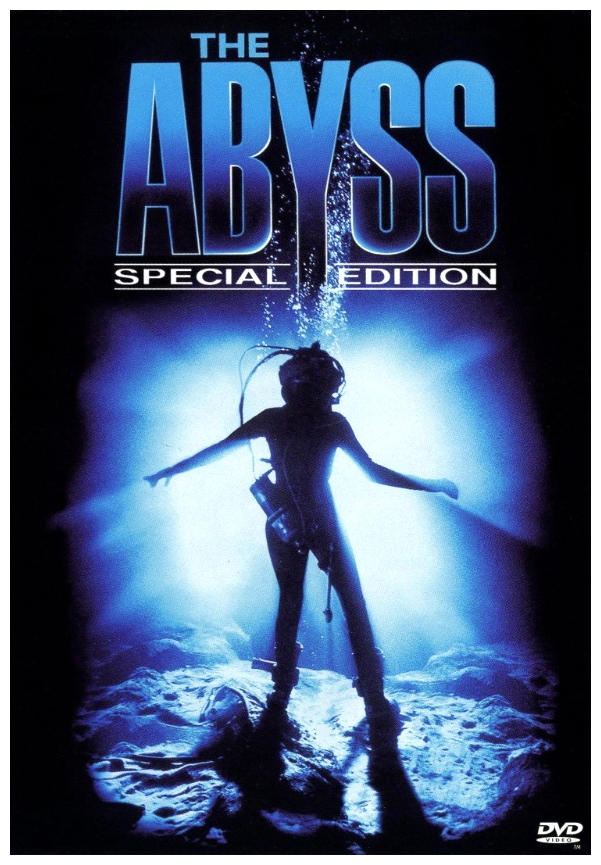 “During the height of the Cold War the USS Montana, a nuclear ballistic submarine, sinks into an ocean abyss due to unknown circumstances. The US Navy scramble to the scene to rescue survivors and recover the nuclear missiles on board before nearby Russian forces do. Their best hope are a team of divers attached to a submersible drilling platform not far from the crash site. During the operation freak weather conditions damage the platform and sever its communication with the surface. As World War III looms above and tensions rise between the divers and a deployed SEAL team, the rescuers discover that there is something else besides the submarine in the abyss.” (courtesy IMDB)

James Cameron‘s films are spectacular big-budget blockbusters that use dramatic special effects, computer-generated imagery and smart editing. Cameron began his career as a screenwriter and set designer working at Roger Corman‘s film company, where he met his producer-partner Gale Anne Hurd, before directing his first film Piranha II (1981) also known as The Spawning or Flying Killers. He followed with The Terminator (1984), a dark science fiction film that was heralded by critics and launched a successful franchise. Cameron followed with a string of high-budgeted action/science fiction crossovers, including Aliens (1986) and The Abyss (1989). When it was first released, The Abyss was widely seen as a stumble in his career, whose previous two films had established him as the world’s leading director of action. The Abyss’s pronounced elements of melodrama and sentiment seemed to separate it out from the more hard-edged approach evident in Cameron’s earlier work, and these elements did not always sit easily with the film’s own action scenes. 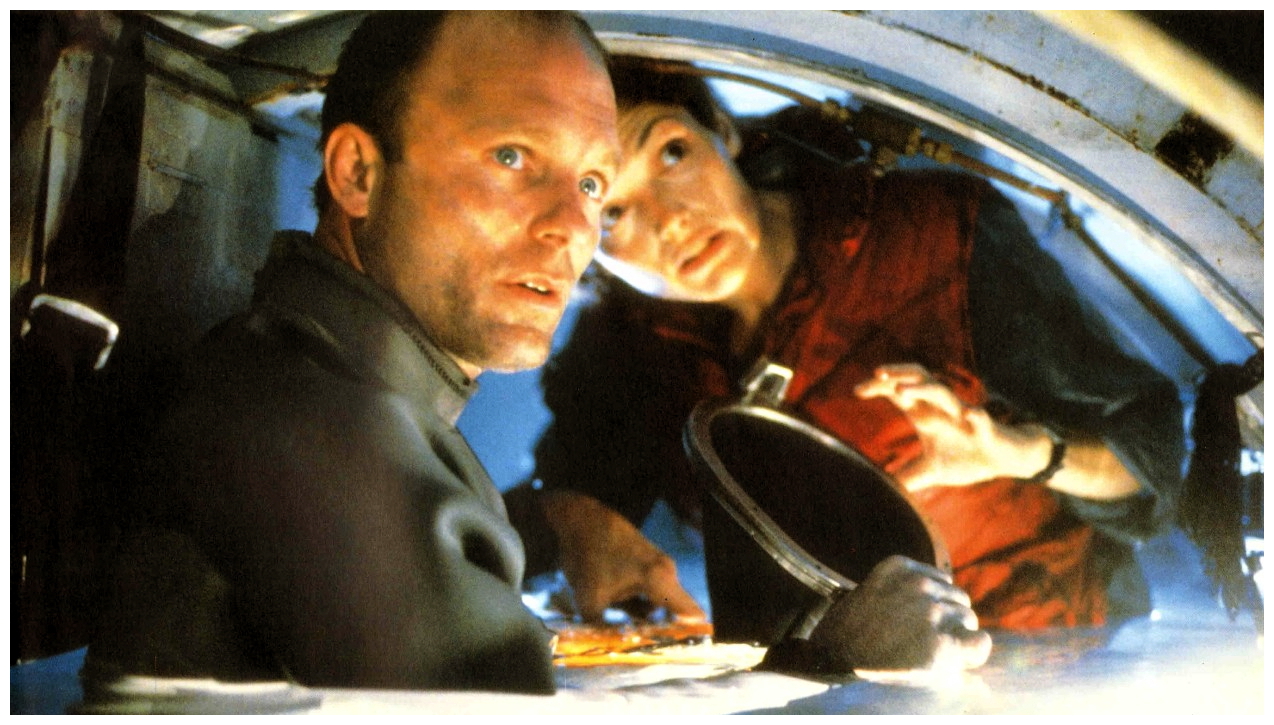 Matters were not helped by the fact that Cameron’s version of the movie was initially deemed too long and cut a large part of its conclusion. In retrospect, and especially since the 1992 release of the director’s cut, The Abyss now appears to be a far more significant achievement. As one might expect from Cameron, the numerous action set-pieces – most notably a protracted chase and fight scene between two mini-subs – are without exception state-of-the-art masterworks, and all the more remarkable for being filmed in extremely demanding underwater conditions. Much of the filming took place in the world’s largest underwater set (7.5 million gallons) within a half-completed nuclear reactor facility in South Carolina. By contrast, the film’s narrative, which deals with an encounter with aliens during an attempt to salvage a downed submarine, has proved more contentious. The story starts with the submarine USS Montana which has an encounter with an unidentified submerged object and sinks near the Cayman Trough. 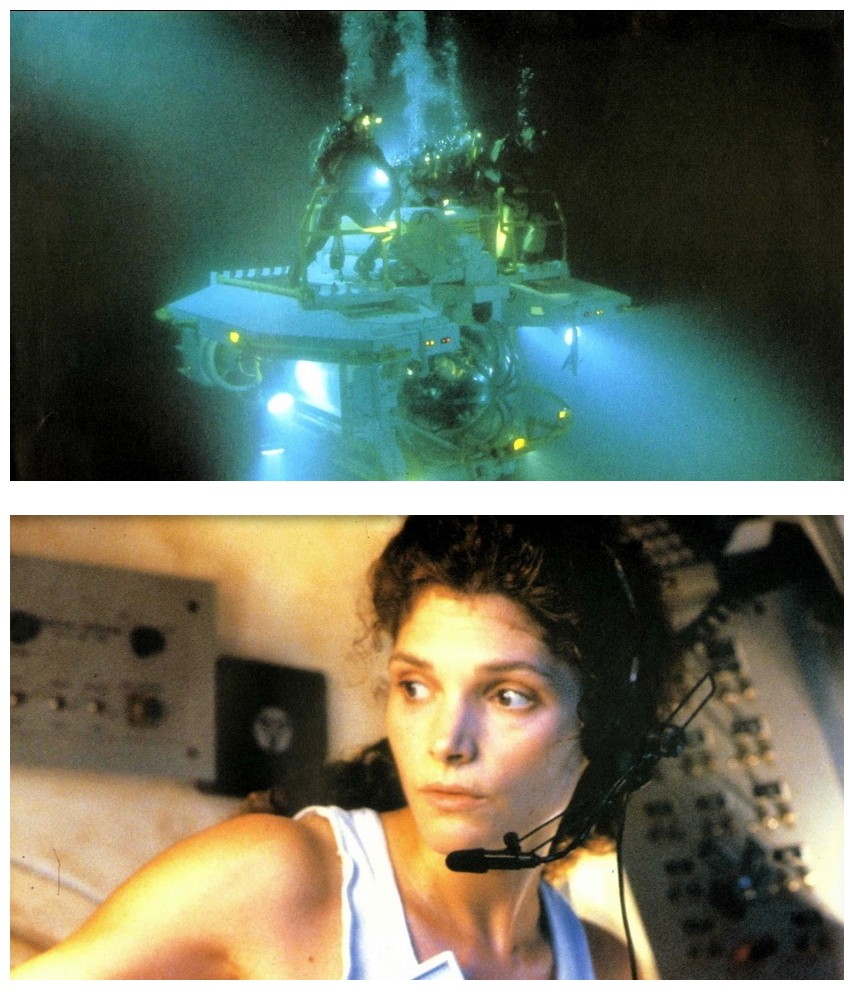 With Soviet ships moving in to salvage the sub and a hurricane moving over the area, the US government decides to send a SEAL team to a privately-owned underwater drilling platform nearby to use as a base of operations. The platform’s designer, Doctor Lindsey Brigman (Mary Elizabeth Mastrantonio), insists on going along with the SEAL team, despite her estranged husband Virgil ‘Bud’ Brigman (Ed Harris) being the platform’s manager. While looking for the Montana, a power blackout leads to Lindsey seeing a strange light circling the sub. At the same time a member of the team, Jammer (John Bedford Lloyd), damages his breathing apparatus in a panic and falls into a coma. This prompts the SEAL commander Coffey (Michael Biehn) to steal one of the mini-subs and recover a Trident missile warhead from the Montana, just as the storm hits above. The rig is partially flooded, killing several crew members and damaging its power systems, and Coffey shows little remorse when he returns to the damaged base. 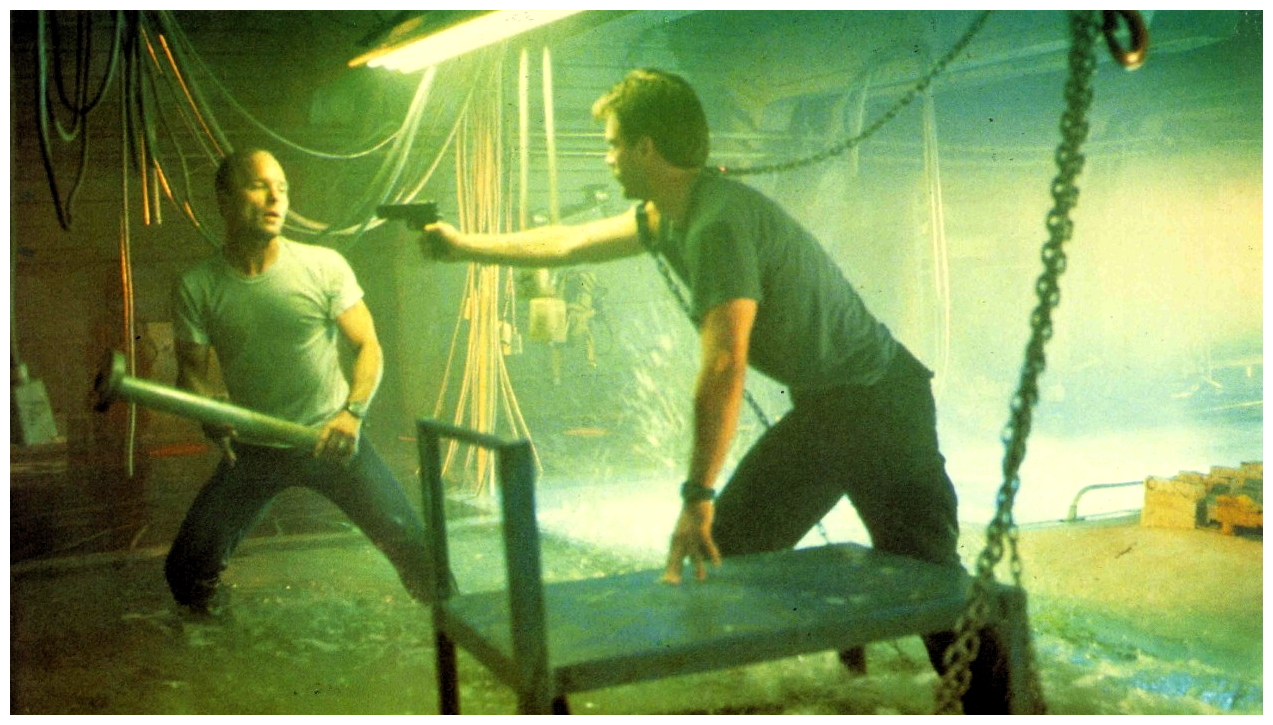 Lindsey is sent to retrieve some oxygen bottles from a damaged portion of the rig to give the crew enough time to wait out the storm. While working, she’s accosted by a small, manoeuvrable neon-purple ‘USO’ followed by a much larger one. Before she can take a picture as proof, the large one zooms downward into the trench, leaving her to take fuzzy, smeared pictures of the smaller one following it. She calls it a non-terrestrial intelligence (NTI). As the crew struggles against the cold, they find a living column of water exploring the base. They treat it with curiosity, but Coffey cuts it in half by closing a pressure bulkhead, causing it to retreat. It soon becomes obvious that Coffey has ‘cabin fever’ and is quite paranoid. The crew find out he has armed the warhead intending to attack the NTIs, and they try to stop him. Coffey escapes in a mini-sub with the warhead, and Bud and Lindsey chase him in the other sub. Coffey is crushed when his damaged sub implodes from the pressure, and the warhead falls into the trench. 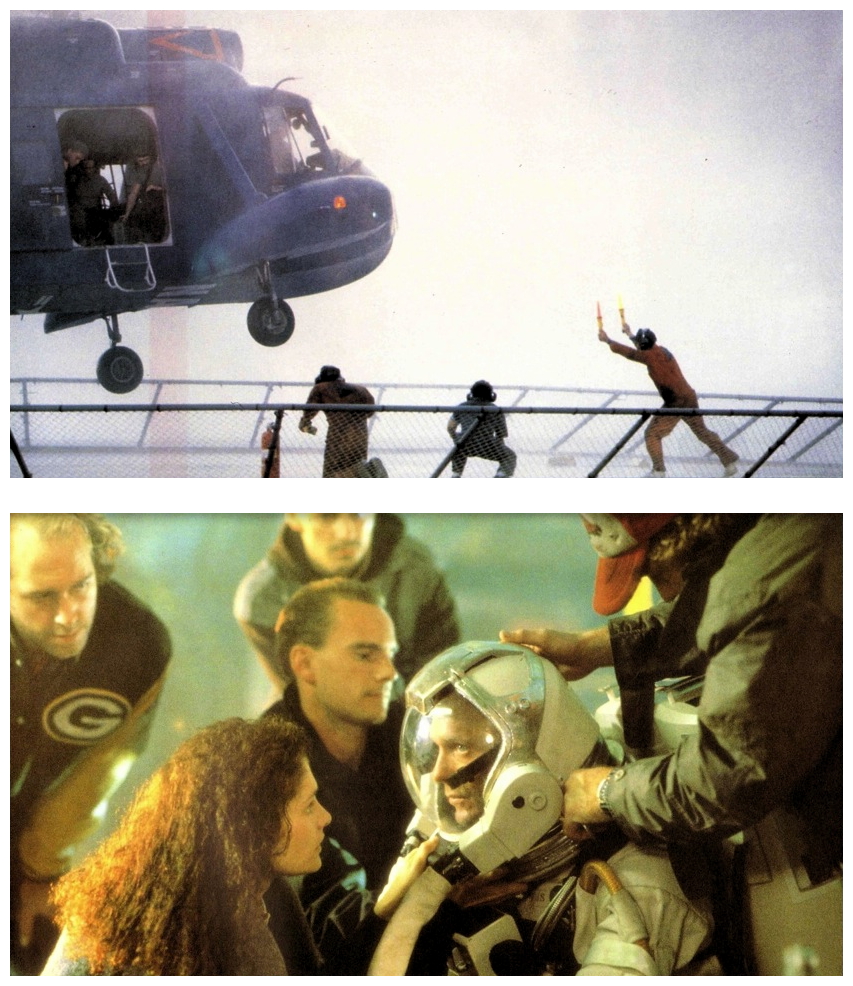 They locate the warhead on a ledge several thousand metres down. Bud volunteers to use an experimental diving suit while communicating with Lindsey via a keypad. After a long drop down, Bud finally reaches the warhead and disarms it. With little oxygen left, he waits to die, but an NTI approaches him, takes his hand and guides him to an alien ship deeper in the trench. Once inside, the NTI creates an atmospheric pocket for Bud, allowing him to catch his breath. The crew above get a message from Bud that he met some friends and warns them to hold on. The gigantic alien ship slowly rises to the ocean surface, collecting the base along the way. Once in the open air and bright daylight we see Bud walking out of the alien ship, and Lindsey runs to meet him. Cameron delivered a 170-minute cut of The Abyss, but decided himself to edit it down for theatrical release, so he removed many of the references to the conflict between the United States and the Soviet Union. 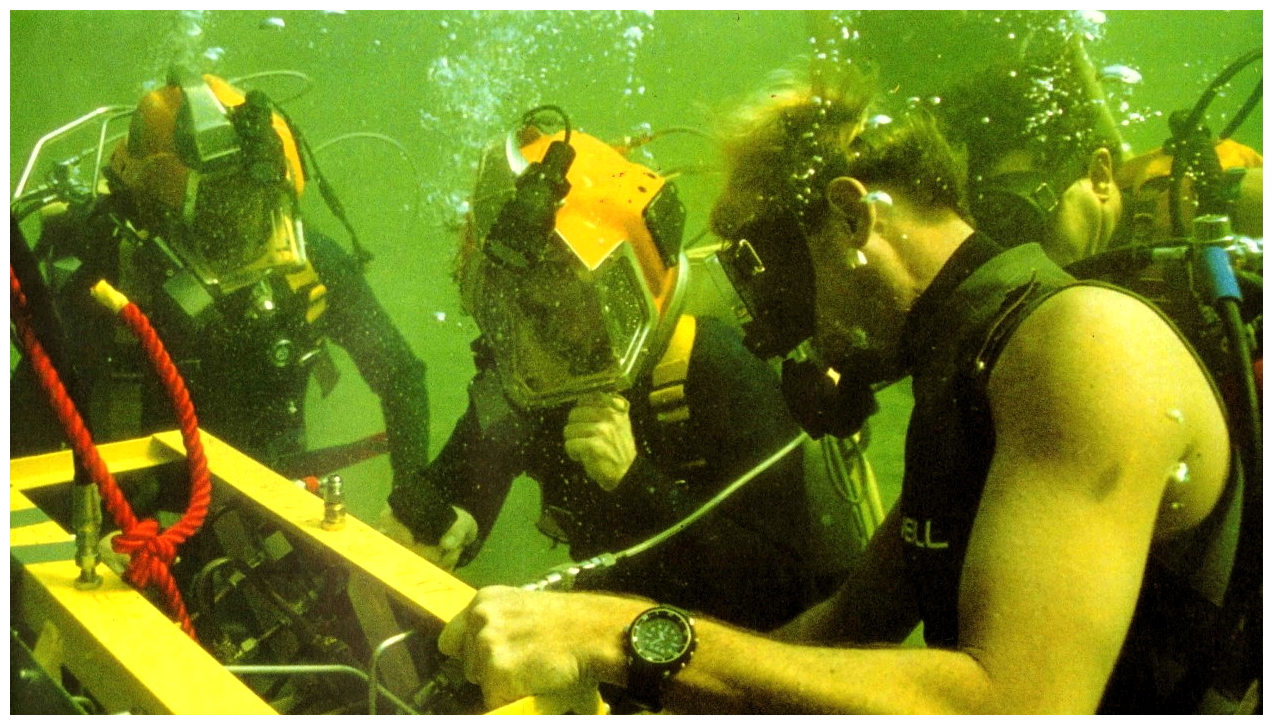 The sinking of the Montana fuels this aggression, but the primary change is near the end when Bud is taken on board the alien ship – they show him images of war and violence collected from news sources around the globe, then create massive tidal waves to threaten the world’s coasts, but stop them at the last minute. It seems the aliens have been monitoring Bud’s loving messages to Lindsey, and have decided to allow the tidal waves to disperse without damage. Some have compared The Abyss to Stanley Kubrick‘s 2001: A Space Odyssey (1968), but a more appropriate comparison would be with Robert Wise‘s The Day The Earth Stood Still (1951), which also features aliens who are essentially peaceful but are prepared to issue some pretty serious threats in order to curtail humanity’s warlike tendencies. In the case of The Abyss, this involves the aliens resolving Cold War tensions through engineering a series of immense tidal waves that threaten major cities around the world (in a scene that was missing from the original release, an omission that arguably rendered the aliens pointless). 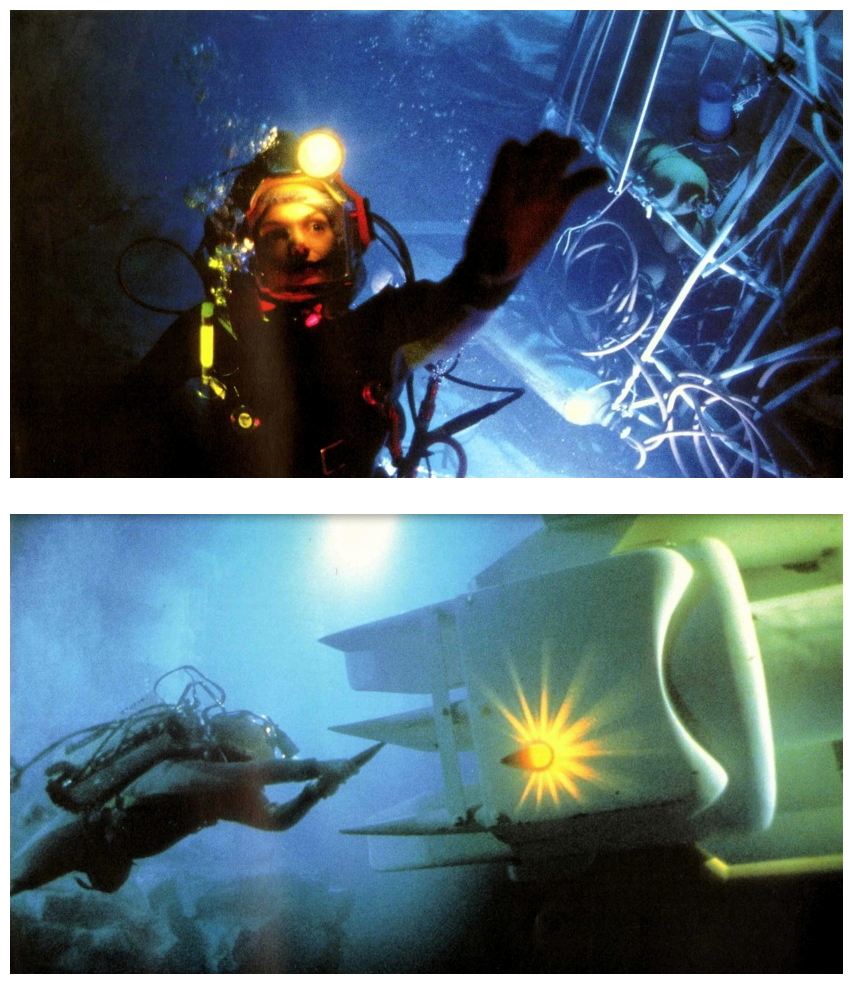 This view of humans as a childlike race desperately in need of some alien authority might not be politically astute, but it is presented with conviction and great cinematic skill. In particular, the structuring of the film’s lengthy conclusion through a descent – Ed Harris‘s epic suicidal journey into the abyss where the aliens reside – followed by an ascent, when the aliens’ massive spacecraft rises to the surface, succeeds an emotional response, mixing apprehension with wonder. It is the invoking of intense emotions, both negative and positive, that The Abyss, for all its awkward moments, retains its power to fascinate and move us. Cameron declared it was the worst production he was ever involved with, a sentiment shared by many of the cast and crew. The difficulties of filming underwater put a great strain on both cast and crew, further complicated by Cameron’s notorious perfectionism: “What I’m good at is working with actors to create scenes and then editing their performances to get the absolute best vibrating version of that scene and then share that with the audience. It’s an amazing process to go through. Sometimes you think it’s not going to work when you get started and then the characters come to life.”

Mary Elizabeth Mastrantonio: “The Abyss was a lot of things. Fun to make was not one of them.” In one particular scene, actor Ed Harris almost drowned, and then punched Cameron in the face because he kept the cameras running. Even the author of the novelisation, award-winning writer Orson Scott Card, said working with Cameron was “Hell on wheels.” Despite his earlier commercial successes, it was Titanic (1997) that filmgoers and critics responded to with the greatest enthusiasm. The film’s groundbreaking special effects and stellar performances of Leonardo DiCaprio and Kate Winslet won eleven Oscars and grossed a staggering US$2 billion, making it the most financially successful film ever at that time, but that’s another story for another time. Right now I’ll make my fond farewells, but please be sure to return next week with a stout heart, an iron stomach and a titanium bladder for another head-melting romp through the garden of unearthly delights known as…Horror News! Toodles! 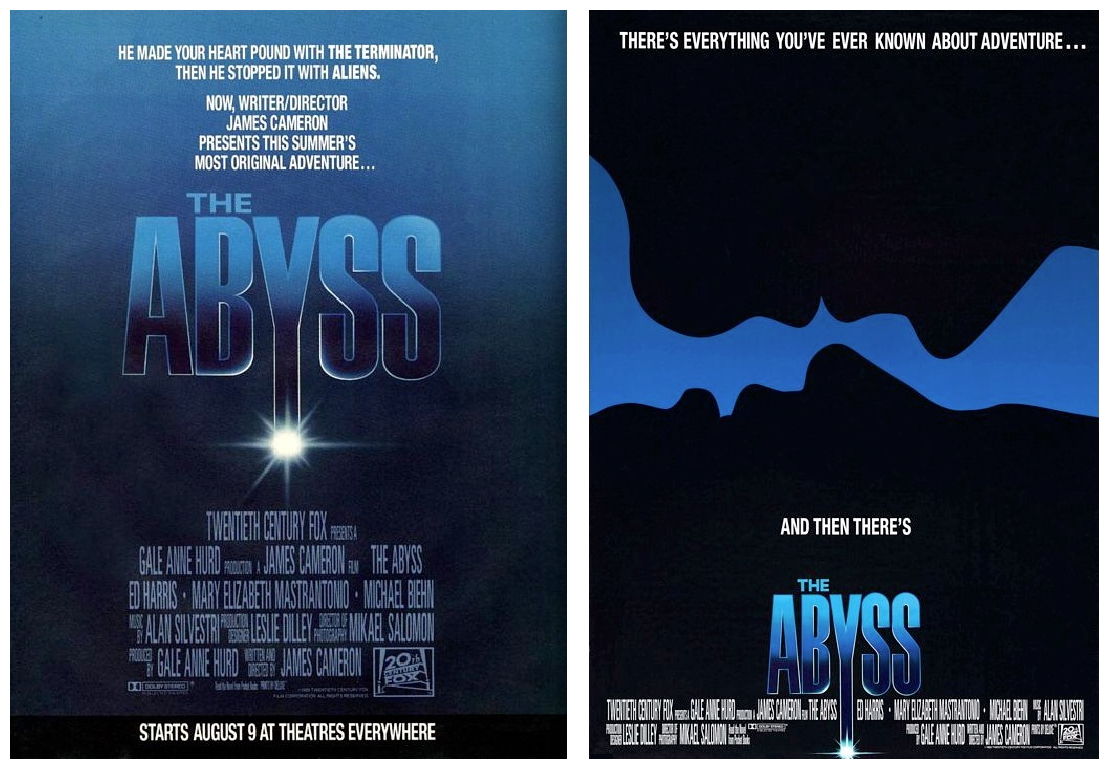