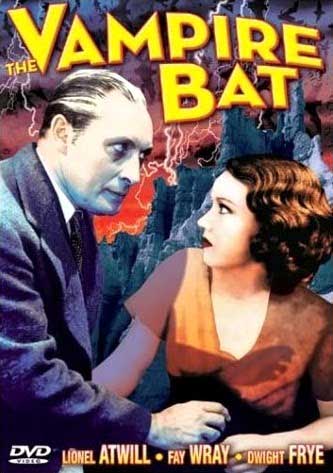 SYNOPSIS:
“In the small village of Kleinshloss, the locals are scared with a serial killer that is draining the blood of his victims, and the Burgomaster Gustave Schoen is convinced that a vampire is responsible for the deaths. The skeptical police inspector Karl Brettschneider is reluctant to accept the existence of vampires, but the local doctor Otto Von Neiman shows literature about cases of vampirism inclusive in Amazon. When the apple street vendor Martha Mueller is murdered, the prime suspect becomes the slow Herman Gleib, a man with a mind of child that loves bats. The group of vigilantes chases Herman, while Von Neiman’s housemaid Georgiana is attacked by the killer.” (courtesy IMDB)

REVIEW:
This week in Horror News we discover that the German countryside has much scarier things than your local schnitzel night, for I have for you a mad doctor out to create life, vampirism and a mind-controlled somnambulist. In other words, an amalgam of Dracula (1931), Frankenstein (1931) and The Cabinet Of Doctor Caligari (1920), and like those other horror classics, The Vampire Bat (1933) still stands up to modern viewing – and modern somnambulism.

Expect to witness breathtakingly passable performances from Dwight Frye, reprising his loony Renfield and Fritz roles, and young Melvyn Douglas as the brick-jawed, bone-headed hero. He may be right, but he’s still obnoxious about it. Fay Wray is beautiful and transparent in that thirties china-doll way, and Lionel Atwill is hammy enough to sit comfortably next to eggs and toast. But the true star, I believe, is Maude Eburne as the hypochondriac auntie, treated by the doctor with Epsom Salts, which definitely gets her on the move. A splendid comedy turn which in itself justifies the price of the DVD, which should be considerably less than ten dollars as The Vampire Bat is in the Public Domain.

So, six deaths in as many weeks, and it looks like the residents of Kleinschloss are getting a little jumpy. But then, who wouldn’t? Looking at this village I’d say six is about the entire female population. It’s no wonder Hermann’s a bit loopy. His likable eccentricity and simple-mindedness are ably portrayed by the legendary character actor Dwight Frye, who played Renfield in the original Dracula, and Frankenstein’s lab assistant Fritz, both in 1931, as well as roles in Son Of Frankenstein (1939), Bride of Frankenstein (1935), Frankenstein Meets The Wolf Man (1943), The Ghost Of Frankenstein (1942) and The People Versus Doctor Kildare (1941).

Burgermeister Gustave Schoen is played passably well by Lionel Belmore, who also has a couple of Frankenstein credits to his name. You’d think an experienced burgermeister would know to be wary of mad scientists – maybe they’re good for the local economy – they seem to boost sales of pitchforks and torches, anyway.

Somehow Oscar-winner Melvyn Douglas was lumbered with a role as police chief Karl Brettschneider. I will point out, though, Melvyn received no awards for this particular role. Melvyn’s girlfriend is the fascinating Fay Wray, only a few months away from dating the Eighth Wonder Of The World, which was rather emasculating for poor Melvyn. He told me later he knew he couldn’t compete with a fifty-foot tall gorilla, and refused to work with Fay ever again – just speaking to her was a little awkward.

Lionel Atwill is superbly cast as Doctor Otto Von Neiman. Fay did team-up with Lionel a couple of times besides this film, just before in Doctor X (1932), and soon after in Mystery Of The Wax Museum (1933). Lionel effectively ruined his burgeoning film career in 1943 after he was implicated in what was described as an ‘orgy’ at his home, with naked guests and p*rnographic films – rather tame by today’s standards. Lionel lied like a gentleman in the court proceedings to protect the identities of his guests, but was convicted of perjury and sentenced to five years probation and life in off-Broadway productions and B-grade roles.

Majestic Pictures was one of the six Poverty Row studios that merged to form Republic Pictures in 1935. The Vampire Bat is one of the best examples of what those studios could do when jumping on a bandwagon without a budget. The bandwagon in this particular case was the runaway success of Universal’s horror movies Dracula (1931) and Frankenstein (1931) but not The Mummy (1932), which was released a month after production on The Vampire Bat had wrapped. The inspiration of those two movies is readily apparent in various aspects of the story, not to mention a few casting decisions. But like many of Roger Corman’s rip-offs of the fifties, it’s also very much worth watching.

Nothing much really happens to advance the main plot, a large chunk of the movie is taken up with hunting down Hermann, and the doctor’s plan is explained in a rather incomprehensible way, having been uncovered more by accident than by Karl’s brilliant detective work. He makes Scooby Doo look like Miss Marple. The Vampire Bat is clearly a Poverty Row picture in so many ways, not just the limited number of locations. Filmed at night on Universal’s European village set, the old dark interior of Lionel Atwill’s house is actually The Old Dark House, the titular character in The Old Dark House (1932).

Still, The Vampire Bat is far better than you’re entitled to expect. It remains moody and atmospheric, and tries hard, if unsuccessfully, to give the plot a rational underpinning – plus it gives me an excuse to stare at Fay Wray for an hour or so, which can’t be a bad thing. Please be sure to join me again next week as we see what the postman leaves on my doorstep – and sets on fire – for Horror News! Toodles! 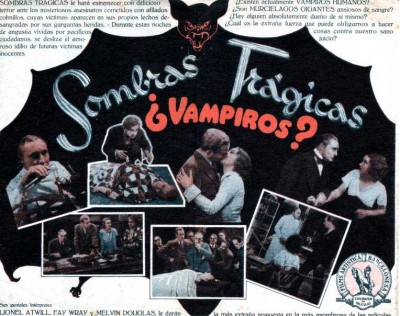