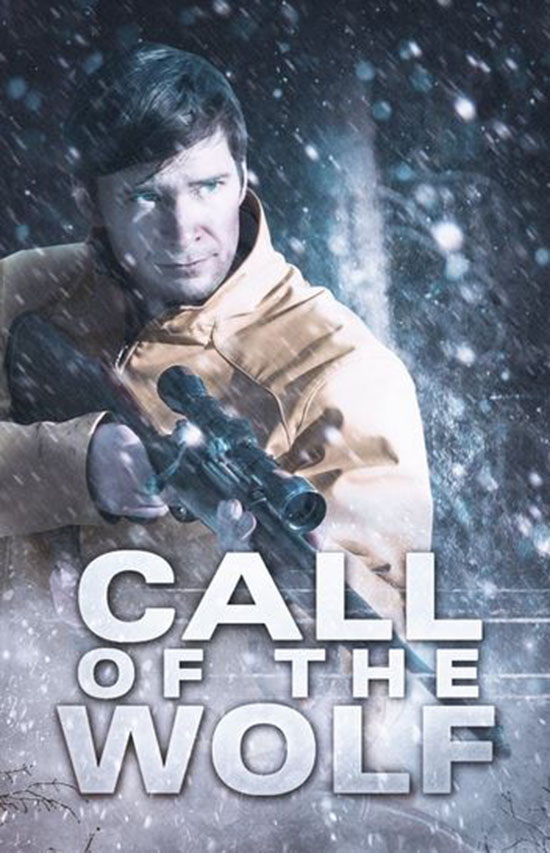 Kidnapped and trapped by a winter storm, this slow burn thriller follows two strangers who must outsmart an unseen killer.

Call of the Wolf was actually Writer/Director R.D. Womack II’s thesis project for the New York Film Academy, and was picked up by Gravitas Ventures. Womack has worked on marketing campaigns for Disney, Lionsgate, Marvel, and ABC, and is working on a new film through his Womack Film Works.

Lester (Aleksander Ristic) wakes up tied up and alone in a desolate cabin in the woods surrounded by several feet of snow. As he struggles to figure out what is going on, he is contacted on a high frequency radio by a man calling himself Wolf (Matthew Oliva). Wolf tells Lester that he has to try and survive in the snowy conditions while Wolf hunts him.  Although Lester is inside a nice cabin, he has no food or water, and no heat source. He tries unsuccessfully to start a fire. Wolf left a Marine Training Manuel for Lester to find, but it doesn’t seem to be very helpful to him, mainly because Lester has zero experience being in the wilderness.

The first thing I noticed is that this film is shot well and the cinematography is beautifully done. After 40 minutes of waiting for the Nazi zombies to show up, I was starting to grow tired of Lester aimlessly running around outside in the snow. Wait, this isn’t “Dead Snow?” It’s actually a shame there are no zombies in this film.  The majority of the film is Lester and Wolf attempting to play cat and mouse via radio, but the fact that after a while Wolf’s accent sounds an awful lot like Yosemite Sam kind of ruins a lot of the suspense factor.  That being said, Aleksander Ristic gives a very solid performance as Lester. Lester reflects on his life and considers himself to be a failure.  He keeps looking at his watch, which obviously means something to him. For about a minute, I thought maybe this would turn into some kind of redemption tale.

Lester sees someone running outside in the snow and runs after them. He confronts the mysterious figure and meets Viviana (Cynthia Bravo). Viviana tells Lester that she is also being hunted by Wolf, but she also has a mission, that she shares with him. Lester takes Viviana to his cabin and she tells him she knows how to make fire. Viviana doesn’t trust Lester yet, so she makes him leave the room so he can’t see her fire making secret.  Because she made a fire, they are able to eat that evening and keep warm, but they are still being called on the radio by Wolf reminding them he is hunting them both.

This film has a good, original plot, great scenery, and a couple of impressive actors, but it is exhausting, simply because it is way too long.  Viviana and Lester try numerous times to escape. There is a lot of running around in snow, and Lester injures himself. Once trust is established between the two, they actually seem to care about each other and Lester tells Viviana the story about his watch. It was given to him by his father when he got a good job, which he also quickly lost. The two discover another cabin, full of dead bodies, and quickly realize that their fate is more real than they thought. Wolf continues to taunt them, even giving them hints on how to survive, but still promises to keep hunting them.

Once Viviana and Lester come face to face with Wolf, it seems that he might not be as threatening as he had promised, or is he? In fact, Wolf is in my opinion, the weakest character in this film.  I think it would have been more interesting to watch if Viviana was in the film more, since she was a strong character and very well done by Cynthia Bravo.

I really wanted to embrace this film, but it was just tiresome because of the length, which I think is a shame since it is a good story.  Both Viviana and, especially Lester, were very well acted. Lester was put through a lot in this movie, running through waist high snow, and being injured and bloodied several times. It was a very physical film.  Excellent acting from the two leads, but there was just simply no reason for this movie to be as long as it was.