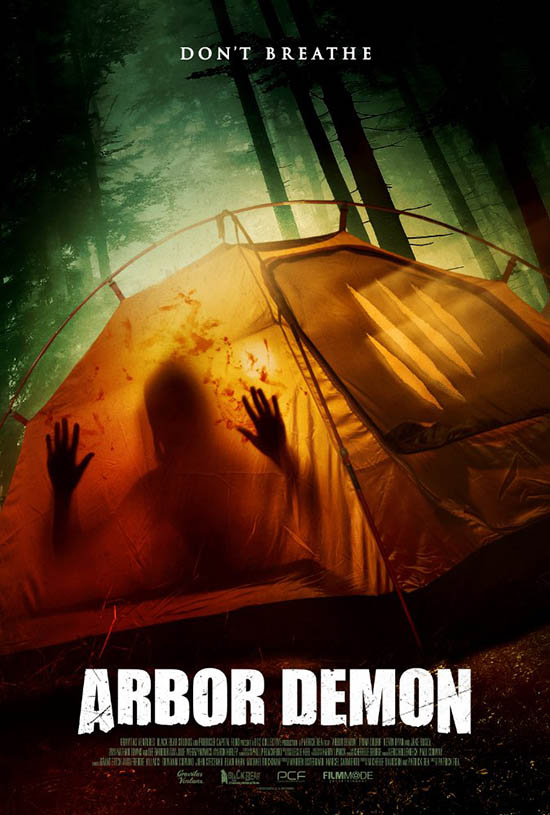 An adventurous woman with a secret from her husband insists the couple go camping to reconnect. Something in the woods wipes out a group of hunters nearby, preventing the couple from leaving their tent. Secrets and supernatural stories come to light, and they must determine if the real threat is inside or outside their enclosure.

Y’know, somewhere, sometime, at some place in our beloved universe, some guy was thinking to himself: ‘There just aren’t enough movies about vegetation-based demons!’ Let me tell you: this movie was conceived and filmed with the intention of making that guy happy!

For most of my life, I’ve had a weak spot for films set in small, confined areas–don’t know why, really. Some people dig dinosaurs fighting one another. Others like slashers. But me……give me a movie set in two rooms of a small house, and I’m floating on a bed of sheer satin! While not quite that restricted, a healthy chunk of this one happens out in the woods, but mostly inside a tent. Yep, you heard that right…and honestly, it doesn’t really destroy the feel of the movie.

See, I signed on here as the crappy films reviewer. I did that willingly, knowing full well what I was getting myself into. But here’s the rub: Arbor Demon really isn’t a crappy film. It’s a weird film, to be certain. Technically, the photography and visual scope of this film were top-rate (remembering that the setting doesn’t span the range of southeast Asia, but mostly about 200 square feet within a wooded area). Just to make this review flow in an orderly fashion, I’m unable to avoid slipping in a couple of spoilers here and there, so reader be advised.

The couple, Charles and Dana are happy and giddy together and decide a little camp out is in order. Of course, on their way to the lets-go-camping-spot, there are a few weird encounters, but mostly they come off as just cryptic and mildly confusing. Many of these encounters involve Dana staring up into trees, while she hears weird sounds…..yep, it plays about as dull as it sounds. From pretty much the beginning of the film, its telegraphed that Dana is pregnant or might be pregnant or is thinking about getting pregnant. 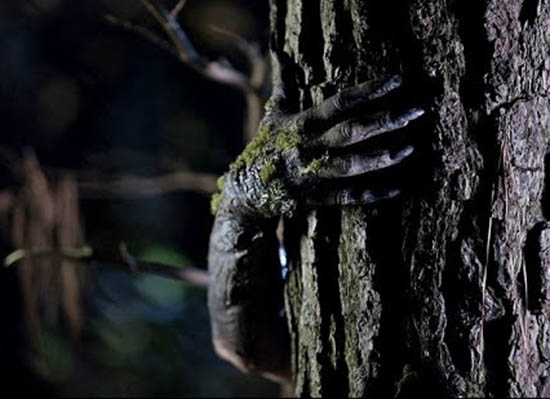 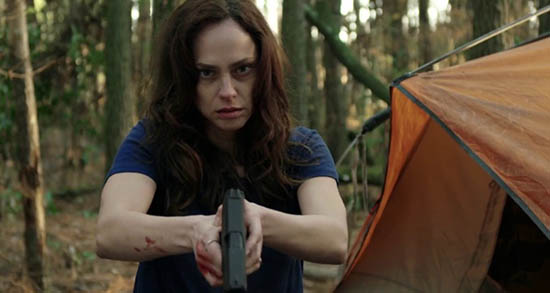 Everyone knows you can’t have a decent ‘trapped in the woods’-flick without a group of hunters, now can you?! So, around the beginning of the second act, the required group of Bubbas show up, mounted on their trusty four-wheelers. In the wee hours of the night, our charming couple are awakened by the sound of speeding ATV’s, gunfire and good old hootin’ and hollering! Our lovely cluster of Deliverance stand-ins have camped a couple hundred yards away, drinking and firing their shotguns into the air, while celebrating around their camp fire. Well, up start the weird tree sounds again…..and it spokes both the hunters and our couple. A moments later, all manner of growling, snarling, shooting and screaming commence and it seems some monsters or entities begin attacking the hunters. Well, as you might guess, things don’t pan out so well for most of said hunters, yet we see one escape on a four-wheeler. Well, to cut to the chase, the escaped hunter, Sean, is ultimately rescued by heroic Charles. Sean is pretty well hurt, but his purpose back at the tent is to provide exposition about the monsters and their history, of course. 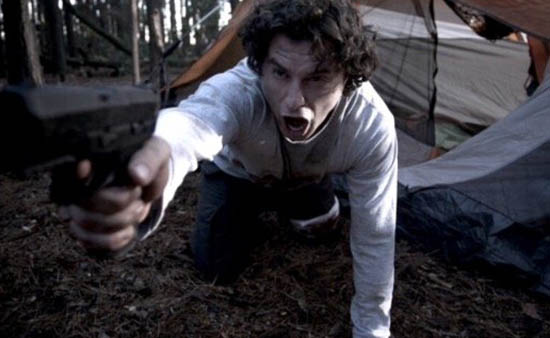 I’m ashamed to admit: I knew when someone said, ‘We’re gonna use him as bait.’, I knew things were about to pop off! Since he knows a bit about the wicked creatures, our annoying hunter, (during a minor tent attack) proclaims, ‘Big…..bad…..wolf.’ Yep, nice creepy statements like that keep the mood going. He even makes an oddly confusing remark about the ‘bear’, so maybe there is or was a bear thrown somewhere into the mix amidst all the hullabaloo….who knows? So, we’re subjected to much more hiding in the tent while the dark shenanigans spin away. The hunter, Sean, played by the capable Jake Busey, exists to sort of play the part of ‘foreboding voice’, but he winds up being more annoying than anything else. Sure, there are a few fragments of touching dialogue, which the charming Fiona Dourif handles deftly, but it only serves to cement the viewer’s feeling slightly. 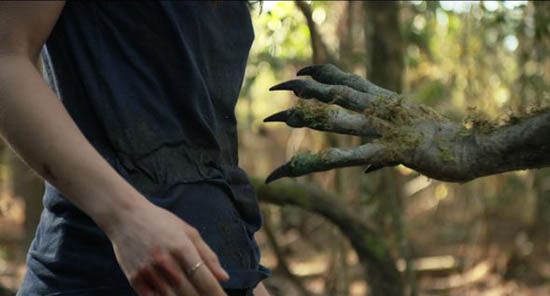 Ultimately, Sean does reveal of bit of info, known as the ‘my Grandma used to tell crazy stories’ shtick. So, he proceeds to tell one of Granny’s old stories about a young damsel sacrificed to help end a drought. I’ll skip spoiling the very end of the film. Overall, the whole things comes off as atmospheric and fairly adept at holding the viewer’s attention. Will this end up on any ‘Top 10’-lists? I strongly doubt that. Overall, we’ll give this one a solid B+. Don’t stay up all night to watch this one, but if it’s a choice between watching this one, or mopping the kitchen…..this’ll be a lot more fun!