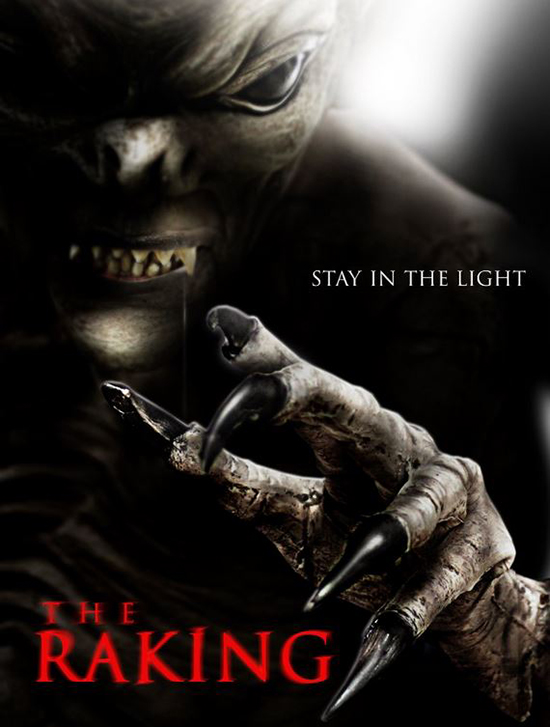 A group of college co-eds embark on a weekend-long camping trip as part of a Cultural Anthropology project to research an internet creepypasta urban legend.

Orson Welles was an amazing human being.  In his mid-twenties he co-wrote, directed, and starred in one of the greatest movies ever made.  Bryan Brewer, the writer, director, and star of “The Raking,” is no Orson Welles.  He’s not even Ed Wood.

The films starts with a cold open (can we please retire the cold open, people?).  A couple and their young son get stranded in the middle of Joshua Tree.  The parents are quickly dispatched by a mysterious creature in the night.  For some reason, never very well explained, the child is spared.

We cut to present day, and the young boy, now played by Mr. Brewer, is fooling around with his girlfriend.  She’s a co-ed and he’s her TA.  The movie never acknowledges that this is an inappropriate relationship.  She invites him to join her study group for some reason.  They meet up at a bar, in one of the most interminable scenes in the movie, with Jade (Allie Rivera) and some dweeb.  Their class has something to do with urban legends.  We find out about some mysterious killings taking place in Joshua Tree.

The killings only occur on the equinox (the movie doesn’t specify if it’s the autumnal or vernal or both, because it doesn’t care about its own plot).  And, wouldn’t you know it, the next day is the equinox.  Let’s go!Exactly what you think would happen, happens.  The Monster (I refuse to call it The Rake) starts picking off the coeds.  Eventually, a redneck survivalist played by Marshal Hilton saves the survivors and lets them stay at his secure, well-stocked home.  All they have to do is wait till morning, the beast is allergic to light, and all will be well.  However, every character in the movie proceeds to do stupid and unnecessary things to keep the movie going.

Watching “The Raking,” one has to wonder if the filmmakers even like movies.  It fails on even the most basic level of storytelling.  For one thing, the film can’t decide who the protagonist should be.  You assume it will Mr. Brewer’s character or his girlfriend.  However, the film’s focus meanders to Ms. Rivera’s character, then to another character, then back.  No one has any kind of character arc, and the dialogue is all exposition.

The cinematography is bland to the point of being insulting.  How one could have access to Joshua Tree, one of the most beautiful parks in the country, and film the whole movie at night is beyond me.  There’s also innumerable examples of unmotivated camera movements.  Mr. Brewer seems to think that watching the hatch of an SUV close is the height of visual storytelling.

The early scene at the bar stands out for its badness.  It lasts over 10 minutes, and nothing interesting happens.  The action, as much as there is, is shot in a confusing, lazy way.  The scene should be shown at film schools.  It’s a master class in how to not block a scene.

A few good things try to rise out of the rubble that is this movie.  Ms. Rivera and Mr. Hilton do everything they can with what they’re given.  Hopefully they can find work in a movie worthy of their efforts.  Also, the monster effects are mostly practical, which is nice.  Still, it’s not enough to make the movie watchable. 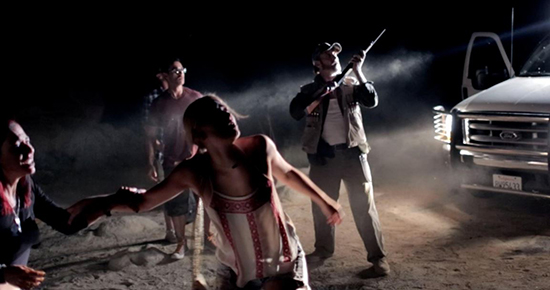 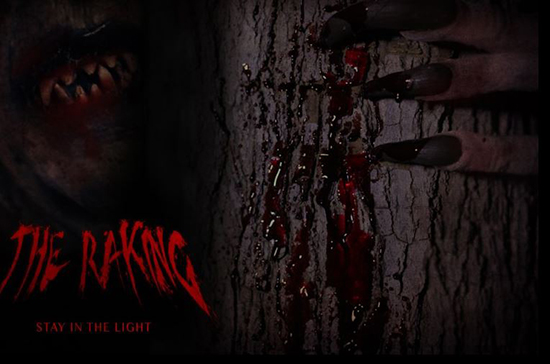 The film’s greatest sin is the fact that it doesn’t respect its own story.  It’s established that the monster can’t stand light, even from a small flashlight.  However, when the sun finally rises, the monster is unaffected by it.  The closing climax takes place entirely in sunshine.  This completely negates everything the movie had set up beforehand.  It’s insulting to the audience.  Again, one has to ask if the filmmakers actually like movies.

In summary, “The Raking” is yet another in a long line of lazy, uninspired horror movies made for the straight-to-streaming market.  Don’t waste your time and don’t accidentally support the filmmakers by watching it.