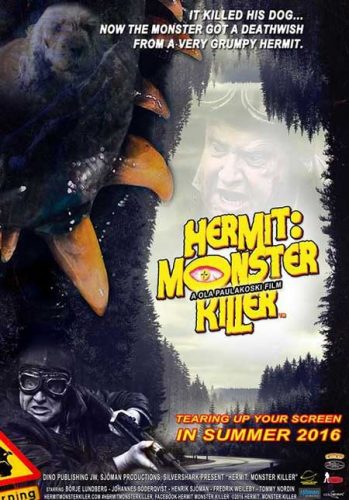 This creature feature tells the story of a an old grumpy man (the hermit) on revenge, a pack of hunters and a rugby gorilla mascot running for his life, with one thing in common: an alien being that has crashed to earth, eating anyone in its path. Now it’s up to the heroes to stop this menacing creature at all cost

Chalk up another creature feature B-movie win for Sweden – Ola Paulakoski’s Hermit: Monster Killer delivers everything you could ever want in low budget, independent horror. It’s got laughs, it’s got bloody, gory kills, it’s got a crazy monster, and it’s got a rugby mascot in a gorilla suit running for his life through a forest. But most importantly, it’s got heart. I know I say that a lot, but I have the good fortune of watching a lot of independent, low budget/no budget horror movies, and what sets a good indie apart from a multi-million dollar, Hollywood made horror film is when you can see on screen that the cast and crew are doing something they love. And unless I’m horribly mistaken, Paulakoski’s cast and crew must have had a blast making this movie.

Written and directed by Paulakoski – his feature length debut – with the screenplay by Fred Anderson, we open with a meteor crashing down to Earth. From past experience we know that this is rarely a good thing – we’ll end up with zombies, or worm creatures taking over our bodies, or, best case scenario, it spills out some green funk and next thing you know everything is covered in moss. 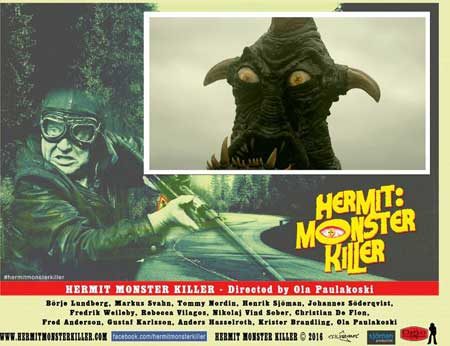 This time, it brings with it a creature that is very hungry and very vicious. It tears up anything it can get its claws on. Once we’ve got the monster part of the film established, we move on to meet the victims, er, I mean the cast of human characters. We’ve got a rag-tag rugby team with a tough coach and a gorilla mascot, a group of hunters who start thinking something is wrong when they find an elk skull high up in a tree, and a young, snotty boy (played by Markus Svahn in his film debut) who likes to pull pranks. And, of course, there is our hermit, played by Borje Lundberg, who has lived alone in the woods for 40 years, having only his dog, Laban, keeping him company. 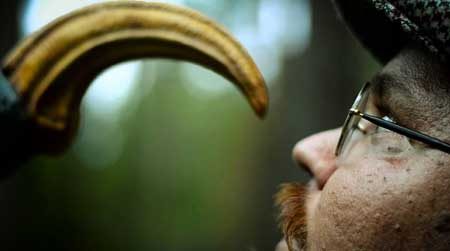 For the most part, Hermit: Monster Killer sticks to a familiar script – monster kills characters one by one until a final battle. Same as the average slasher film, really; campers and counselors get introduced, Jason comes and kills them in fun ways, then he and the final survivor (girl) battle. However, the way this film really succeeds where others of similar structure fail is by adding a lot of gore and just as much humor, then topping it off with a bit of emotion and the unexpected. Bodies are torn open, heads are ripped off, and there’s even a shotgun through a skull that really kicks things up a notch. For a low budget film, the gore effects are pretty well done. 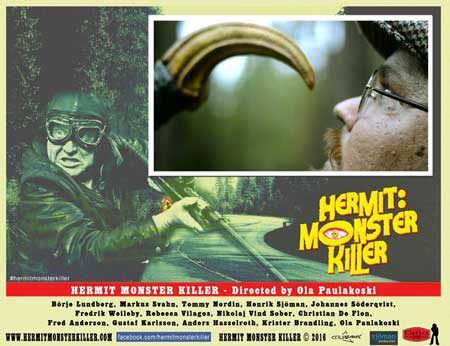 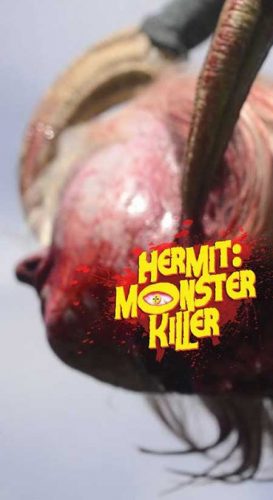 The monster itself is a separate discussion completely. In most cases, we only see bits and pieces of it at a time – a claw here, a close up on its ugly face there – which works just fine. When we do see the whole thing, it’s kind of silly. It looks kind of like what a monster would look like in a Playstation 2 video game made for kids. In most cases, this would get negative marks in my review, but somehow, in this movie, it works. It’s cheesy, but thanks to the overall tone and the fact that the movie isn’t taking itself too seriously, the filmmakers are able to pull it off.

Hermit: Monster Killer is one of the more fun movies I’ve seen in a little bit. I really appreciate any new monster movie that has character and a sense of humor, and this one has both. The acting is good, especially in the case of the leads. The kills are bloody and nasty. I especially like the way it finishes, tying up most of the loose ends. A lot of times, I find myself saying that I hope the filmmakers are able to work with a bigger budget next time around, that I can see their intentions but because of monetary restraints they just weren’t quite able to deliver. Don’t get me wrong, I absolutely wish Paulakoski the best of fortunes going forward, and I very much look forward to seeing more of his work, but I don’t think he is a director who needs a huge budget to make great things happen on screen. He certainly didn’t need it here.