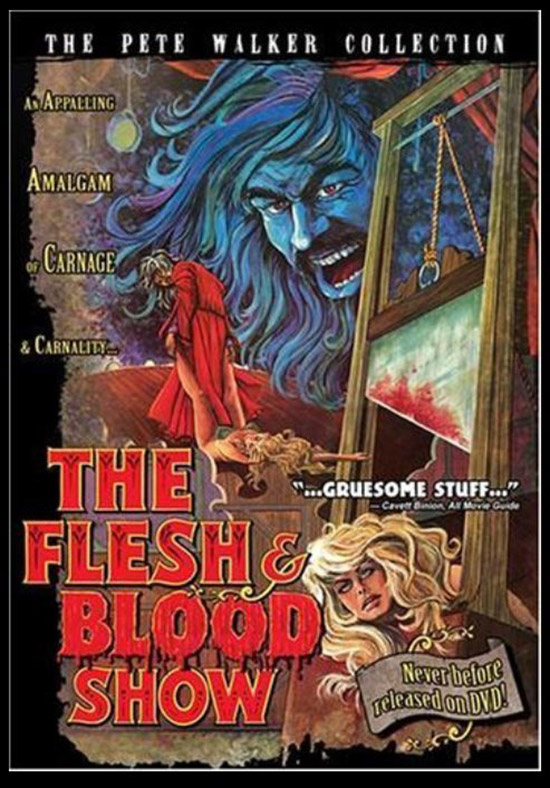 A group of actors are hired by a mysterious producer to rehearse a new show in an abandoned theatre. Upon arrival, they discover they’ll also be living in the derelict theater. But they aren’t alone- there’s a masked psychopath stalking the playhouse murdering them one by one.

When people think of British horror movies names like Hammer, Amicus and maybe Tigon spring to mind. But during the seventies, independent producer/director Pete Walker was also a name to be reckoned with. His films like House of the Whipcord, Frightmare and Die Screaming Marianne were deliciously sleazy blends of gruesome chills and sexploitation thrills. 1972’s THE FLESH AND BLOOD SHOW is one of his earlier efforts and stands as a proto-slasher film, coming only a year after Mario Bava’s pioneering Bay Of Blood (1971). 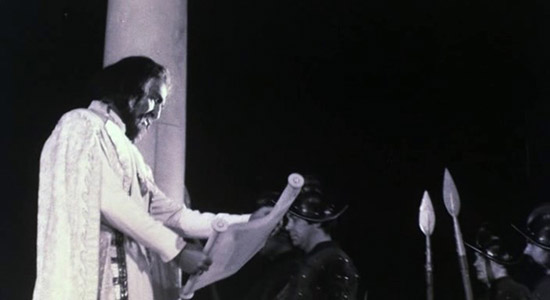 Like most of Walker’s films, The Flesh and Blood Show deals with free-spirited young people victimized by older authority figures. Walker would hone this theme in later films, creating a parade of evil judges, embittered prison wardens and sexually frustrated matrons wielding power drills. In real life, Walker was vocal in his loathing of authority figures, although he adamantly denies there being any underlying personal message to his films. Lack of artistic pretense aside The Flesh and Blood Show does demonstrate Walker’s skill at creating atmosphere and tension on a shoestring budget.

The Flesh and Blood Show kicks off with plenty of flesh as aspiring actress Carol, played by Hammer starlet Luan Peters (Twins of Evil) bounces around her flat in the buff, only to be frightened when fellow thespian John (David Howey) pops up at her door with a knife protruding from his belly. The wound turns out to be John’s ghoulish idea of a practical joke. Carol, her flatmate Jane (Judy Matheson) and John discover they’ve all been hired to rehearse a new, improvised production being workshopped at a remote, long-shuttered theater.

We follow our trio to the theater itself where their fellow cast mates are waiting. They all discover that they’ll also be living in the filthy old theater, which quickly leads to some coupling accompanied by more gratuitous nudity. It’s refreshing to travel back in time to an era when actresses had natural bodies (except for their massive eyelashes) and were willing to show them. But unbeknownst to the actors, a masked psychopath is watching them from the shadows. 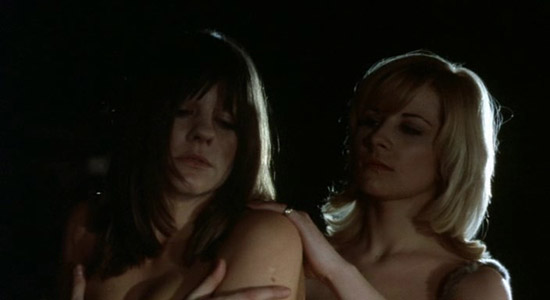 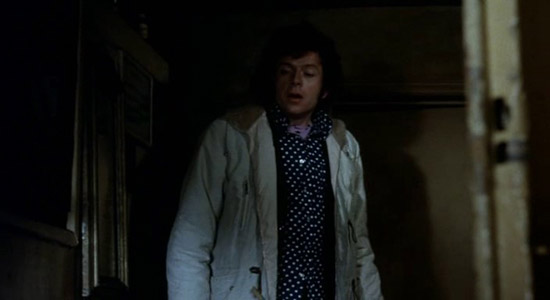 Walker wastes no time getting the body count underway, and it’s about this point where horror aficionados start complaining about the lack of explicit gore. This absence of blood might be the result of British censorship, or, perhaps, Walker chose to emphasize flesh over blood, knowing he could safely recoup in the T&A market if The Flesh and Blood Show bombed as a horror film. In 1972, British films containing nudity were slowly moving from the theatrical ghetto of Old Compton Street to more legitimate, and hence more profitable cinemas. Walker may have been hesitant to mix nudity and explicit violence in fear of getting knocked back to Old Compton Street. Within a year movies like Antony Balch’s Horror Hospital would start liberally mixing bare flesh with flowing blood.

Though Walker certainly employs nudity to titillate, he also uses it to make viewers uncomfortable. This is particularly true in a later scene where the killer brutally beats a naked man (we’re talking full-frontal here!) and then drags a screaming nude woman down the hallway to her demise. If you asked Walker, he’d probably say it was just an excuse to “show more tits.” But in 1972, using explicit nudity to make characters appear more vulnerable was radical and disconcerting. Even the American “roughies” of the period shied away from being this brutal. Oh, there’s also a seven-year-old child in the room during all this… so it’s creepy, inappropriate stuff. And best of all, during the theatrical release, this violent, explicit flashback was presented in glorious 3D! 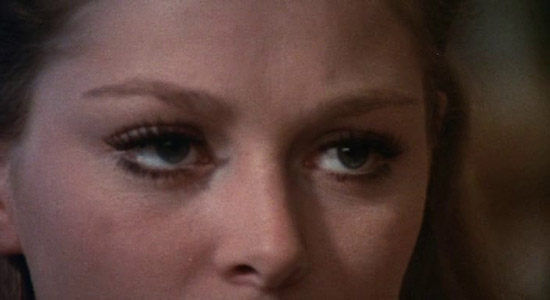 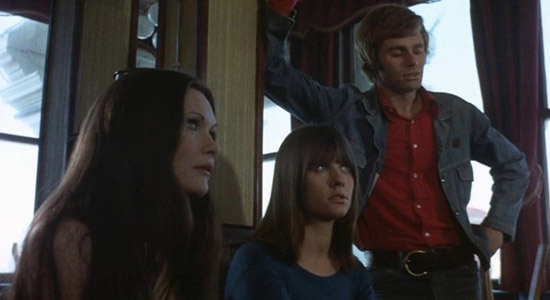 Walker avoided showing geysers of blood, but most of the other conventions that would become part and parcel to slasher films are here, including seeing the killer’s POV as he stalks innocent female victims, employing a location with a dark past, old folks warning the potential victims to leave and, of course, air-headed victims who stick around despite the cavalcade of warning signs screaming “run away!” Fortunately, all the victims in this film are British, so they still sound intelligent even when they’re doing stupid things.

In my opinion, The Flesh and Blood Show is an unfairly overlooked forerunner to the more explicit splatter films that followed. It’s nicely shot, decently directed, and sports a cast well worth looking at. The screenplay by the late Alfred Shaughnessy has a dignified Agatha Christie feel, but that’s no surprise given that Shaughnessy went on to become a writer and primary script editor on the landmark ITV series Upstairs Downstairs (1971-1975). If you’re willing to look past the lack of onscreen gore, you’ll enjoy this one and hopefully be inspired to check out some of Walker’s later and more accomplished films. The Blu-ray release features the 3D sequence (bring your own glasses) and an entertaining interview with the ever-so-British Mr. Walker.

The beautiful female cast already had a few horror films under their belts. Luan Peters and Judy Matheson both lent their charms to Hammer’s Twins of Evil and Lust for a Vampire (both 1971). Jenny Hanley was also a Hammer veteran having played the heroine in Roy Ward Baker’s unfairly maligned Scars of Dracula (1970). Candace Glendenning had already done some genre time that very year in the well worth seeing Horror on Snape Island (1972). 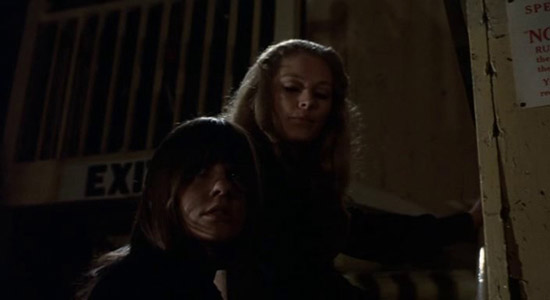 Flesh and Blood Show’s breakout male star was a reasonably handsome, snaggletooth actor named Robin Askwith, who looked like Mick Jagger from a distance. Though he has a smaller role in The Flesh and Blood Show Askwith went on to play the lead in my favorite British gore fest Horror Hospital (1972) before starring in the Confessions series of English T&A films- starting with Confessions of a Window Cleaner (1974) and eventually including Driving Instructor, Pop Performer and Confessions from a Holiday Camp. Askwith embodied the consummate “lad” in these films and despite all the nudity and ribald humor remained a favorite with the British audiences, eventually publishing his entertaining autobiography Confessions of Robin Askwith.

I’m endorsing The Flesh and Blood Show for entertainment and historical purposes. And if it’s not living up to your expectations as a horror film, just sit back and enjoy the actresses in all their natural 1970’s splendor. It’s not as good as the unforgettable Horror Hospital (1972) but a bit better than the same year’s Horror on Snape Island.