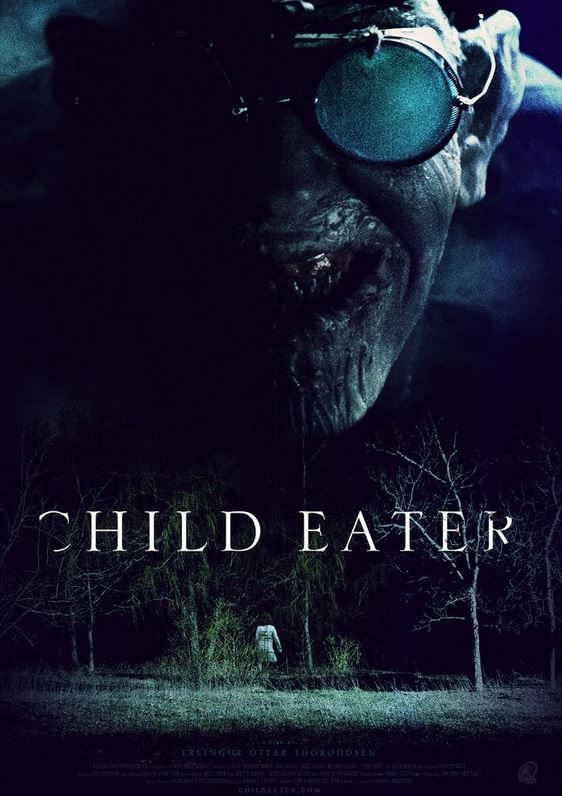 A simple night of babysitting takes a horrifying turn when Helen realizes the boogeyman really is in little Lucas’ closet.

It seems like every region has a boogeyman unique to that locations, some kind of spook or specter that people in that location like to tell stories about to scare young ones. The folk tales and urban legends are great fodder for horror movies, as evidenced by classics like Candyman (and not-so-classics like Urban Legend). Director Erlingur Thoroddsen tries to add a new boogeyman into the horror lexicon with Child Eater. The question is, does he succeed?

The movie centers around a legend around a small town centering on a murderer who was suffering from macular degeneration. When diagnosed with the condition, the man went insane and believed that he could keep his eyesight by consuming the eyeballs of other people. In his twisted mind, the younger the target the more his sight was restored. With that twisted logic, his favorite target became children. It is a legend that a babysitter named Helen never believed in until she took a job watching over a child named Lucas. Lucas claims that he’s been seeing a strange old man lurking around watching him, but no one put much stock in his claims. However, Helen learns that Lucas is in fact being stalked by the murderer of local legends and is forced to confront someone that is no longer human.

Working with a limited budget, Icelandic Erlingur Thoroddsen was able to make a very tense movie that managed to give you an awesome looking monster and some impressive gore without ever looking cheap. The man knows how to stretch a dollar without the final product suffering for its lack of budget. He also has an eye for framing shots and creating a moody atmosphere. He’s not afraid to show us the main antagonist early on, yet managed to keep enough of him in shadow just enough that if there’s any deficiencies in the makeup, you can’t see them.

The movies success lies heavily with its main villain who is easily one of the best parts of it. He has a fascinating backstory that is the same kind of nightmare fuel that would make other famous movie maniacs proud, yet there’s just enough mystery about him that leaves you wanting know more. How is it he’s still alive? How did he become a supernatural entity? We don’t know, but the movie will definitely make you want to find out. He also is one well designed creeper. With his mottled features, the blackened goggles, and too long fingers, he looks like something from the darkest fairy tales ever told. He was like a goblin or troll that would still children from their beds. Ironically, in many ways, that’s exactly what he is. He’s definitely a fun villain that I’d love to see again.

Instead of being just an excuse to showcase a cool monster, the film gives us the time to get to know our main character, Helen. She’s a young woman who just found out she’s pregnant. Her boyfriend comes across as being kind of a douche, so she could end up being raising her child herself if she ends up keeping it. She has some real life problems of her own, and seeing her interact with others helps flesh out her personality. The movie takes time to develop her, which makes it easier to identify with her and root for her. Actress Cait Bliss did a standout job of portraying Helen, giving her equal parts strength and vulnerability through the movie’s runtime. The only downside here is that Helen’s transformation into someone that manages to ignore incredible amounts of pain to face off against a supernatural force didn’t feel earned. It’s just something that seems to happen without much of a believable catalyst.

Overall, this was a very enjoyable movie. Not only does it show Erlingur Thoroddsen’s talents of a director or prove that Cait Bliss is an actress to watch, it also provides an interesting new villain that is definitely worth having his own franchise. It’s well paced, well acted, and well shot. I definitely recommend giving this movie a watch when you get the chance. It’s a fun ride.