Book Review: A Monster Calls The Art and Vision Behind the Film – Author Desiree de Fez 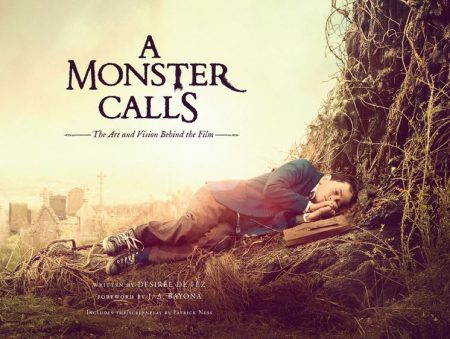 The film, “A Monster Calls” is a 2016 Fantasy adventure-drama based on Patrick Ness’s book of same name.  The book release “A Monster Calls The Art and Vision Behind the Film” is an homage to the hard work and dedication that went into this creation.

“Conor (Lewis MacDougall) is dealing with far more than other boys his age. His beloved and devoted mother (Felicity Jones) is ill. He has little in common with his imperious grandmother. His father has resettled thousands of miles away. But Conor finds a most unlikely ally when the Monster (Liam Neeson) appears at his bedroom window one night. Ancient, wild, and relentless, the Monster guides Conor on a journey of courage, faith, and truth that powerfully fuses imagination and reality.”

In anticipation of its release Insight Editions has created a fantastic new art book featuring just about everything on this film that you can think of. Primarily a production style art book,  this is one to own, packaged and presented with care and beauty. J. A. Bayona, the film’s director brings his creative vision to the screen as he prepares for his next project, “Jurassic World 2”.

The book “A Monster Calls The Art and Vision Behind the Film” is priced at $45, hardbound and beautifully packed full of movie photography, artwork, interviews, special effects production photos and the film’s entire script.

Beyond the artistic contribution, the book offers much in the way if its interview content that contains several exclusive one-on-ones with the key cast embers. Director J. A. Bayona,  shares how the movie came into existence, its struggles, challenges and final realizations that made this book come alive.

Art details and preliminary set designs are compared side by side to the final location sets. Sequences are presented in their very early forms displaying the art and planning that were used to provide the film’s animation portions.

Some of my favorite portions include the drawing-to-final movie shot comparisons that show the level of detail taken into consideration for the film’s final presentation. The 3rd act “nightmare” sequence is stunning as well as the monster close up that use a combination of set props, practical effect and cgi.

Fans will love the film’s extensive detail and coverage inclusions that makes for one mighty 236 page color and black and white coffee table book. Sized at approximately 12″ x 8″, this must-have edition will go hand-in hand in your library along side Insight Editions other amazing releases over the years.

Author Desiree de Fez and the team at “Insight Editions” has put together a great new offering for lovers of fantasy films in this incredible new product offering.

A Monster Calls The Art and Vision Behind the Film