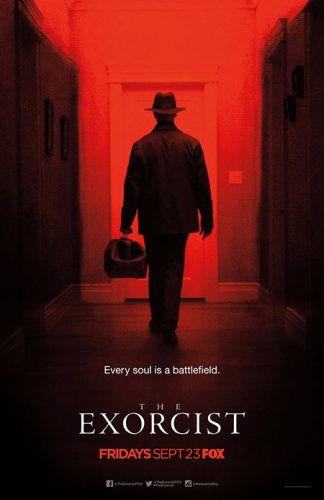 When the Rance family are plagued by a demonic presence, two priests must come together, in the hopes of defeating the evil force.

1973 marked the year that would change horror forever. Soon after the success of The Exorcist made a mark in history, sequels were bound to follow. Though as strong of an impact The Exorcist made on the public, it left much to be desired with every sequel that followed. It was clear that the film was a one-off phenomena never to return.

Jump now to year 2016 with networks expanding their horizons on horror and horror content to the point where nothing seems taboo anymore. It is the perfect opportunity for “The Exorcist TV Series” to make its way into living rooms, not as a feature film but as a TV series. Fox took the chance and flew in with flying colors offering yet another terrific horror series to the 21st century. We’ve seen them come and go, with themes ranging from zombies, to vampires, to supernatural shows rooted in dark places. Though while the theme of the devil is nothing new, it is when basing it on the cult film of 1973. As it stands, The TV show “The Exorcist” is creepy as hell bringing some familiar characters that echo the film of the same name.

I had wondered if a TV show could capture the essence of the film by giving us what we want rather than some reboot, I am happy to say my curiosity has been fulfilled. The TV show “The exorcist” does boldly embrace the sights, sounds, and feel of a franchise gone astray. The Exorcist is indeed back with a basket full of evil and diabolical dark things that pokes at our psyche and delivers the chills. 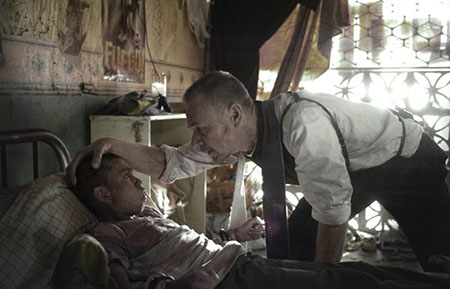 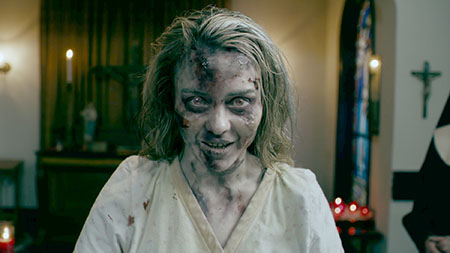 So onto the series! This unnerving thriller welcomes the characters of Father Tomas Ortega (Alfonso Herrera ) and Father Marcus Keane (Ben Daniels) as they prime protagonists of this series. Essentially Ortega is faced with the task of taking on an exorcism without the support of the church. It is Father Marcus Keane, a long time practitioner of taking on the devil in situations where no one else would that comes to the aid of Ortega after Ortega’s failed attempt at luring him away. The family in focus is led by actress Geena Davis who plays Angela Rance, a mother of 2 daughters who believes that “something” evil has infiltrated their house. Casey Rance (Hannah Kasulka), the good daughter of the 2 has recently been acting strange. Her innocence seems to be the perfect host for a demon to take root and plant itself inside her. Needless to say, things get weird and dark real fast.

The Exorcist – the TV series, does in fact tie into the 1970’s legacy acting as a modern day sequel. Some of the more revealing legacy items are best left for viewers to enjoy (rather than spoiling some of the plot reveals for you) 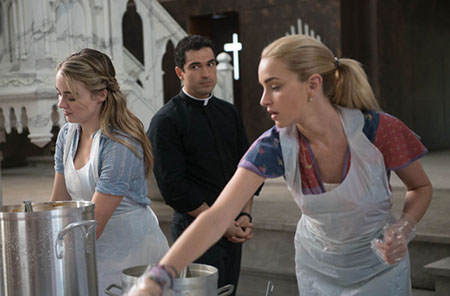 However, it’s fair to say that a majority of this series (at least up to episode 8) focuses on the possession of Casey Rance. Taking a que from the Linda Blair style, the producers of this show give the viewers what they have been waiting for. Which is a scary, unnerving young teen possessed that beyond the R-rated elements of the 1970’s film are extremely harrowing to see manifesting on screen. In watching this I was reminded in how disappointing all the original Exorcist sequels were by delivering more on historical viewpoints rather than shock and awe we were originally moved by. While shock and awe at times can be lacking of substance, it is has long been overdue to in the universe of the Exorcist franchise.

Kudos to the practical fx staff who succeed in the demonic realization of a young girl possessed. A few added digital edits and wire stunts make for some cool viewing moments. Though the star of the FX here is the jarring demonic transformations. 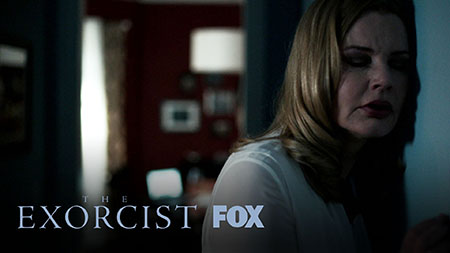 To add a whole new element to the experience, we get to see the actual demon himself in the form of a creepy old man (Robert Emmet Lunney) intent on taking over his host. There are no horns and pitchforks here but rather smaller subtle elements used effectively into manifesting our invisible demon. Lunney is credited as 3 characters: (The Salesman / Captain Howdy / Pazuzu). Is Lunney an effective demon Pazuzu? I was quite convinced in his charming-meets-diabolical portrayal.

One thing that was clear in the reviewing of this series was that at times I could literally envision the
malevolent vulgarities being spewed force if not for the fact that they were absent due to this being a TV show. I am curious to see if a more un-rated version arrives that changes some of the more TV friendly overdubs into something more demonic appropriate. None-the-less, there are plenty of unnerving visuals to make up the difference. Viewers will recognize a few homage’s to the 1973 movie per way of iconic crab walks. 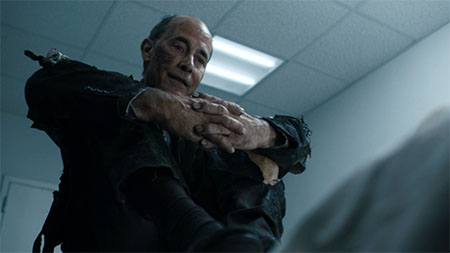 What really drew me into this series was that it doesn’t waste any time getting into the dark elements. Adding to the traditional inevitable demonic possession, the story takes on an additional subplot weaving into a foreboding gathering of elites who are not what they seem. Upon their gatherings we are introduced into a darker agenda that promotes the arrival of the Pope as: “He’s coming”. Though astute viewers will quickly guess the irony of it all as church and religion begin to take on different manifestations. Needless to say, I found this subplot idea rather intriguing as it builds into the background. 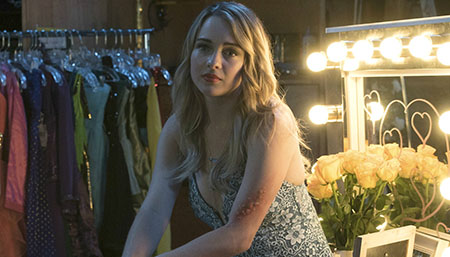 As a series, the show has the task of creating enough material to last over its 10 hour long episodes that primarily focuses on a girl possessed. Though due to the epic long length of it all the series cant help but have slow moments as it takes on the conflicts between church and demonic possession. Adding to that we have a few moral struggles integrated to better acquaint us with the background the show’s characters.

Actress Geena Davis gives a powerful performance as the acting series mother trying to cope with a dark history and current ordeal. 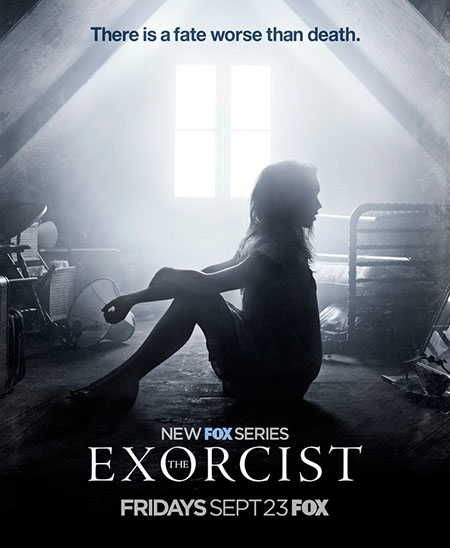 Upon watching I was convinced that episode 8 was the season finale (which could have easily stopped their leaving on a a brooding ominous note) only to discover it had 2 more episodes to go. 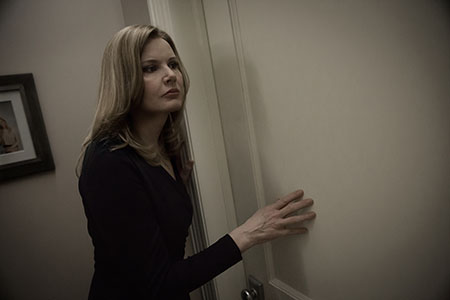 While the fan base of this series is not as broad as other horror rooted franchises currently in play, it still is a worthy creative endeavor deserving of mention and viewing. I specifically avoided all reviews and critics to approach my viewing unbiased and focused. I was not disappointed in the least. My only question here is what lies beyond the demonic possession intriguing enough to warrant a successful season 2? Or perhaps it was only intended to be a “1 season” series? We shall see!