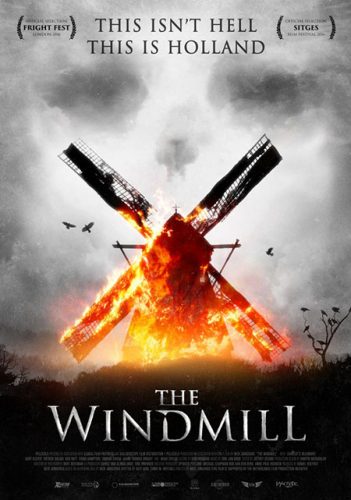 Jennifer is an Australian girl on the run from her past who washes up in Amsterdam. In a desperate attempt to stay one step ahead of the authorities, she joins a coach-load of tourists embarking on a tour of Holland’s world famous windmills. When the bus breaks down in the middle of nowhere, she and the other tourists are forced to seek shelter in a disused shed beside a sinister windmill where, legend has it, a Devil-worshiping miller once ground the bones of locals instead of grain. As members of the group start to disappear, Jennifer learns that they all have something in common – a shared secret that seems to mark them all for doom.

The Windmill Massacre is writer/director  Nick Jongerius’ first full length feature film. The film was shot in the Netherlands, where Jongerius was born and is set in Amsterdam. Amsterdam is known for it’s windmills, which play a very large part in this film. 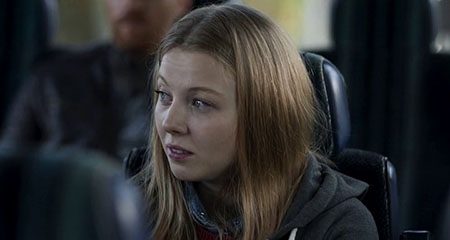 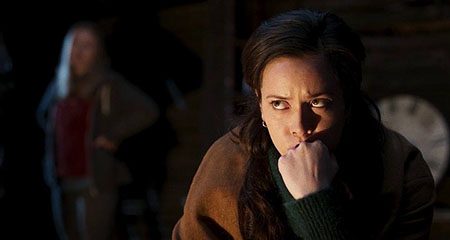 Jennifer (Charlotte Beaumont) is an Australian working as a nanny, until her employer discovers she lied about her identity and calls the police. As Jennifer goes on the run to avoid being arrested, we are introduced to other characters in the film.  Douglas (Patrick Baladi) and his son Curt (Adam Thomas Wright), are traveling and Curt is trying to get in touch with his mother. It’s clear that Curt does not have a good relationship with his father.

Nicholas (Noah Taylor) is a doctor with a drug habit trying to escape the memory of a medical procedure gone wrong. Takashi (Tanroh Ishida) is a young man mourning the death of his grandmother. Ruby (Fiona Hampton) is desperate to find a job as a photographer, and during a job interview she is asked to come back with photographs of windmills. Jackson (Ben Batt) is seen blind folded by his friends and taken to a back street brothel.  He is obviously spooked by something and after a little while, he runs back outside to find his friends. Jennifer is living on the street and having dreams about a building burning. She takes medication, for a reason that is not explained, but she seems to have bad anxiety. 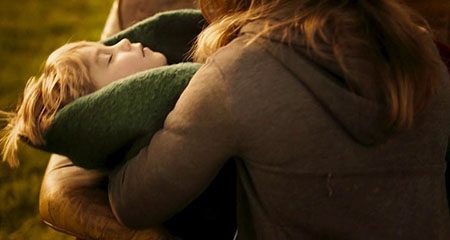 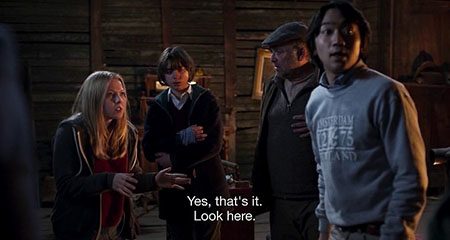 Jennifer decides to board a tour bus that does windmill tours, in an effort to avoid the police. She doesn’t have a ticket to ride, but the bus driver tells her that’s okay and says, “There’s always room for one more sinner.”  That should have been the first clue that this was the wrong bus to get on! But of course, Douglas and Curt, Nicholas, Takashi, Ruby, and Jackson are also on the bus, which makes for a bus full of misfits who don’t seem very happy, being driven by a creepy bus driver.  What could possibly go wrong?

They set out on the tour and at the first stop, everyone gets off the bus, except for Jackson, who seems to be trying to sleep off a hangover, while having flashbacks of the night before in the brothel. Inside the first windmill, Jennifer becomes ill and has to go outside, where she realizes she is out of her medication. The other passengers attempt awkward conversation with each other, which doesn’t go very well. Takashi, who only speaks Japanese, recognizes Ruby as a former toothpaste model in Japan, which seems to upset Ruby. Jennifer falls asleep and has a nightmare about her father, who used to beat her. Suddenly, she sees a man in the middle of the road and tells the bus driver to stop, to avoid hitting him. The driver stops, but there was no one in the road. Jennifer gets off the bus to check, but there is no one there. 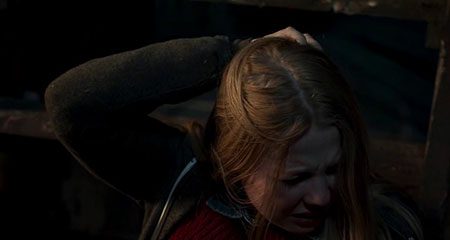 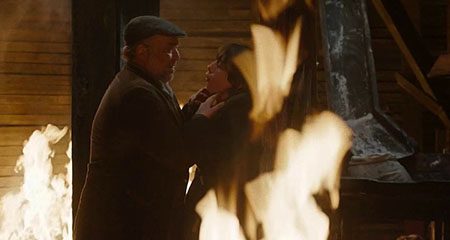 When she gets back on the bus, the bus won’t start, and they have no choice, but to sit and wait. Douglas tells the driver to call dispatch for help, but the driver refuses.  In fact, the bus driver doesn’t seem concerned at all about being stranded out in the middle of nowhere in the dark.

Jennifer and Jackson decide to go for a walk and look for help. Nicholas shows a map to the bus driver and asks him exactly where they are, and when the bus driver points to the map, Nicholas tells him there are no windmills marked on the map, but he can clearly see a windmill nearby.

This can’t be good.  Jennifer and Jackson reach the windmill, which looks like it was set on fire at some point.  Out of nowhere, a demonic creature carrying a scythe, butchers Jackson in front of Jennifer. Jennifer runs back to the bus and tells the other passengers what happened, but they don’t believe her and think she’s crazy. The creature appears in the woods near the bus, but Jennifer is the only one who sees it, and the bus suddenly begins to tip over sideways and ends up falling into nearby water, while the passengers barely escape. While trying to escape the bus, Curt cuts his hand and is bleeding badly. Douglas becomes angry at Jennifer and tells everyone that Curt is a hemophiliac, and without his medication, he could bleed to death. 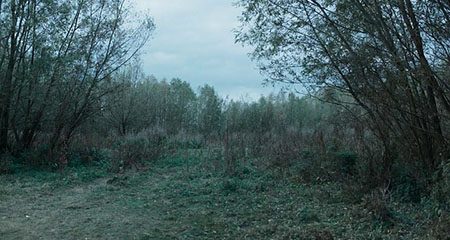 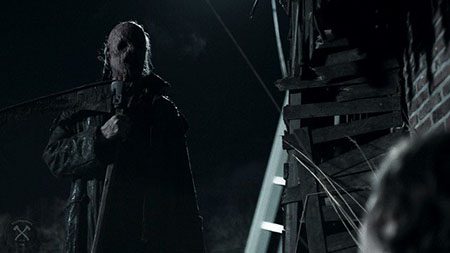 The passengers all decide to take shelter in a shed beside the burned windmill, while the bus driver says he will go to a nearby mill for help. They discover a bunch of odd items inside the shed and everyone’s patience is wearing thin.

One by one, the passengers go outside and each one has flashbacks of something terrible from their past, while the demonic creature tries to kill them. See, the passengers all have one thing in common, and now they’ve been brought here to pay for it and go up against the creature. The bus driver reveals that he knows exactly why they are all there and the passengers discover that there was a legend about a miller who ground up human bones instead of grain, and this explains why the demonic creature is there. Maybe they could have put that information in the tour brochure? It looks like there may be some survivors at the end, but they must set the windmill on fire to escape, and stories like this rarely have a happy ending. 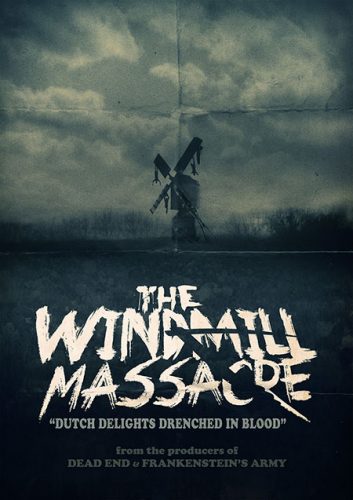 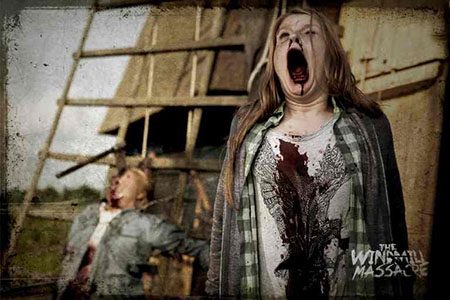 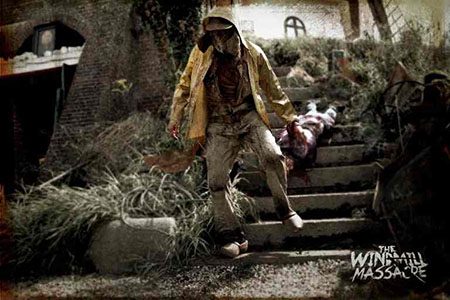 I’m rather familiar with special effects makeup, and I thought that the creature looked pretty grotesque and the special effects were really well done. The scenery was beautiful and the acting overall was pretty good, but I did feel that the film was a bit slow at times.