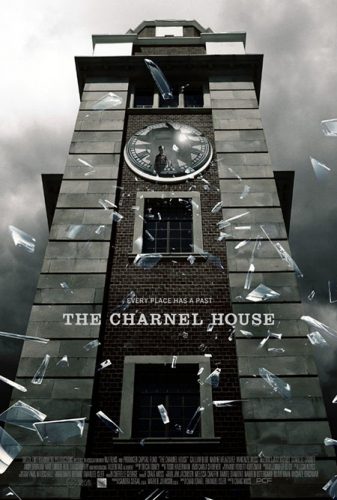 A long abandoned slaughterhouse is transformed into modern lofts in a re-gentrified urban neighborhood. Soon after tenants move in they are tormented by a dark secret that has been trapped in the building for over 30 years.

“The Charnel House” is honestly impressive from the moment it starts, you immediately get the impression that the film makers took this film seriously and honestly wanted to make a quality film. It starts off in 1983 at the Fairmont meat packing company, where a child is drawing with crayons in the clock tower. The child gets a vision that his blood soaked father will rush up hug him tightly, and then leap out of the clock tower with him.

When his father then comes up and proceeds to follow the vision of the child, the father is confused while falling when he looking in his arms and his son is not there. His son is later escorted out of the clock tower by police. The movie then jumps a head to present day where the Fairmont meat packing building has been turned into fully automated luxury loft apartments. 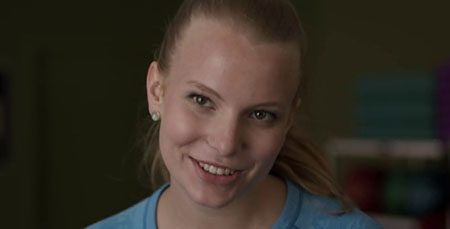 The audiences gets to follow the family which renovated the lofts, as well as a few of the early tenants, and the ghost story premise develops nice and slowly. A box falls in the back ground, glitches in the automated systems of the lofts, and a little boy running down through the hall ways. The tone is further set by a tenant investigating the horrible murders that took place in the meat packing factory in the 1980’s and a historian that wants nothing to do with the building because of the history of murder there. Slowly as the hauntings intensify and tenants start getting picked off one at a time, the father with a mysterious past begins to succumb to a murderous madness. We then discover that the hauntings are not ghosts, but the father’s doppelganger from his childhood trying to remerge with him. The story is a unique merging of ghosts and psycho slashers, in a very well done film.

“The Charnel House” is definitely not low budget, this is not a film where the producers paid the crew in beer, and this is a real film. The actors were all on cue, there was no over acting. Callum Blue, who played Alex Reaves the father in the story, was absolutely brilliant in his performance. There is a scene where he steps in glass and begins to really lose his mind, his performance in that scene alone really stood apart. Not many people can pull off the degradation into insanity and madness, which in the horror genre is a skill, from Anthony Perkins in “Psycho” to Jack Nicholson in “The Shining”. The director could have given more focus into the descent into madness, although one can understand why the director would keep the audience guessing.

This movie should be used as a blue print for the appropriate use of effects in film making, the CGI was sparingly used and only to aid the story, the practical special effects were limited but effective, and the visual effects really hit home. Most of the haunting scenes were done with visual effects, flashes of a child being there, who would disappear or reappear when a light was turned on. It was not overdone, it was just enough to really keep the audience on their toes.

The practical special effects was also lightly, but effectively shot. This movie was not a 1980’s slasher gore fest, the blood and deaths were very believable. One death in particular is very memorable, a drunk tenant leaned her head into a kitchen sink to drink some water and her hair gets pulled into the disposal unit. Her head is pulled into the sink as the water is filling up, you expect her to either drown or be maimed by the disposal ripping out a chunk of scalp.

When she frees herself she falls back hitting her head on a counter killing herself. It was a tense and memorable kill scene. The one kill that could have been done better was the man the father kills after he goes insane, he hangs him upside down and is supposed to carve him up killing him. When the hanging body is found they never show the handy work of the father. I think a quick glimpse shot would brought that extra touch to the moment. 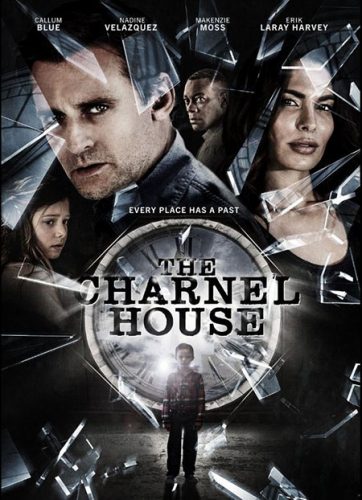 All in all director Craig Moss really made a quality movie with “The Charnel House”, he is no amateur having ten other most comedy full length films under his belt. If this is his first real attempt to break into the horror genre we should expect great things in the future from him. If you read this far and have not figured out that I approve this movie, I do, this movie is great. Grab some popcorn kids, kill the lights, and give this one a watch.