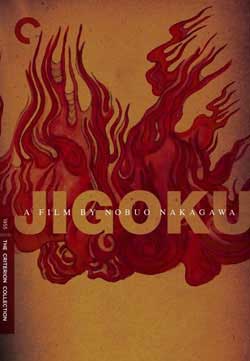 A young student’s life spirals into the evils of hellfire after he meets a mysterious young man.

The Examination: Fire and Brimstone Sensation!

Although this film contains effects that are outdated by modern standards, it is a very powerful story that is based upon the Buddhist belief that sins are atoned for in the afterlife. If you enjoy relentless torture, and laugh at the sight of watching people suffering as much as I do, this movie is for you! 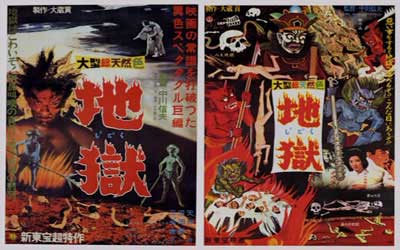 After a vivid lecture of the concepts of hell in various religions, university student Shiro (Shigeru Amachi)recounts the previous nights events; visiting Professor Yajima’s (Torahiko Nakamura) and Mrs. Yajima’s (Fujimko Miyata) home, asking for permission to marry their daughter, and gaining their approval, only to be interrupted by his friend Tamura (Yoichi Numata). Keep in this in mind from this point forward, is Tamura really a friend or an alter ego with an evil propensity that Shiro has created? Perhaps the devil himself? You decide.

Shiro’s life is going great! He’s in love with beautiful Yukiko (Utaka Mitsuya) and has just received permission to take her as his wedded wife. But there’s always that one friend hanging around that likes to cause trouble. For Shiro, that would be Tamura, who happens to have a sadistic nature. When Shiro asks Tamura for a ride home back to Tokyo, the problems begin. While driving Shiro home, Tamura gleefully runs over Kyoichi Shiga (Hiroshi Izumida), a drunken yakuza out on a walk. Yes, yakuza! Out of all the people in Japan to run over, why did it have to be yakuza! Despite Shiro’s pleas to return back for the man, Tamura refuses. But leave it to Tamura to remind Shiro that it was his decision to take that road to begin with! Oddly enough, throughout the movie, Tamura always seems to know things about people that he should have no knowledge of. 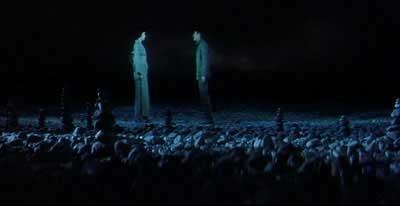 Shiro’s conscience begins to take over and he is plagued by guilt. He pleads with Tamura to go to the police, without success. Pondering what to do, and over ridden with guilt, he admits his crime to his fiancée Yukiko. Yukiko agrees to help Shiro and the happy couple rush for assistance. Shiro demands to take a cab, only to have their taxi crash into a telephone pole, where Yukiko dies in Shiro’s arms as she whispers, “I don’t want to die.” 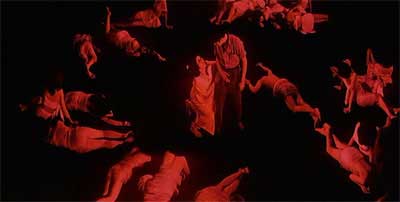 Stricken with grief, Shiro wanders into a bar and meets a young woman named Yoko. And you won’t believe it! It’s the girlfriend of Mr. Yakuza that Tamura hit and killed. Shiro’s life begins to disintegrate. Seeing his loved ones fall victim to evil, he becomes overwhelmed. Shiro descends into a psychotic haze of groovy Austin Powers-ish music (minus the hairy chest), alcohol, and crazy sex until he receives word that his mother is gravely ill. Shiro immediately heads to the senior community to see his mother before she dies, but is followed by a vengeful Yoko, that is out to avenge the death of her beloved yakuza boss. While there, he also meets Sachiko, an exact look-a-like of his deceased fiancée.

Shiro’s world falls apart and I won’t tell you how he gets there, but Shiro is sent screaming into hell, along with all of the other main characters, although it is not completely clear how all of the others got there to begin with. The rest of the story is now told from the depths of hell. 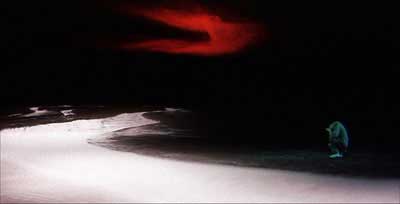 Once in hell, all time and reason appear to be suspended. Hell’s occupants are brutally tormented by the Lord of the Eight Great Hells and his evil minions. The rest of the movie consists of distracting disjointed vignettes and meandering repetitions, whose only relation are the tortures of hell.

Through the whirlpools of screaming people in agony, complete with drain, bone crushing, flesh stripping, human entrails, and people being skinned alive, Shiro finds Yukiko on a mist covered river bank where she tells him that she was pregnant. Their child, which at that point they agree to name Harumi, is floating aimlessly through the puss filled rivers and bloodways of hell. Unable to see her, and hearing her cries, Shiro attempts to find and rescue baby Harumi. During his relentless search, Shiro experiences the most unspeakable and savage measures of torture, each time being restored to his original health, only to suffer over and over again.

Finally spotting Harumi floating on a lotus blossom, the river turns to blood, and Shiro makes a desperate attempt to save her. Was he successful? I don’t want to spoil it for you, but I will venture to say it is highly unlikely. The flesh flailing and people roasts are worth the watch! Burn baby burn!