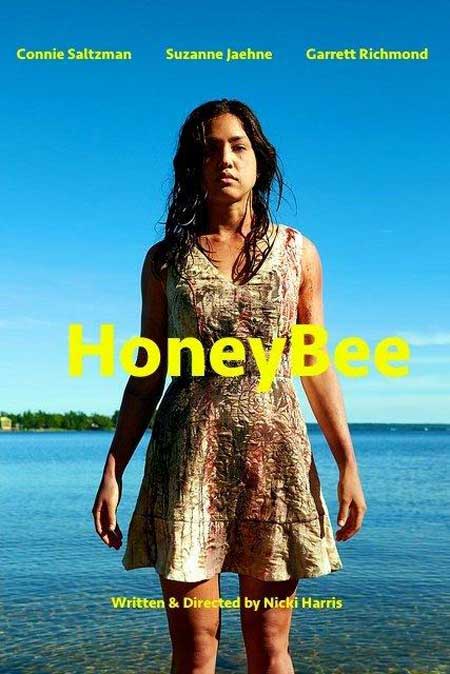 A quiet town is jumpstarted by the arrival of an enigmatic family; a statuesque mother named Louisa and her gorgeous teenage sons. Sixteen Year-Old Hilary is working hard to get good grades, hoping to escape the small town life a long line of relatives lived before her. With the arrival of the mysterious family just weeks before school is to let out, life suddenly becomes appealing. Hilary’s father is instantly charmed by Louisa, while she herself finds a strong connection to middle son Kadin, ignoring her dubious instincts. As the town falls under the hypnotic spell of the young men, no one but Hilary sees the peculiar loyalty that holds them together and the lengths they will go to give their mother what she needs until it’s far too late.

“Honey Bee” starts off with the feel of Twin Peaks, there is a quaintness to the picture that the director is trying to paint, including the high schooler with a Harley. That is until the ridiculous music kicks off and we are forced to watch 5 hipsters in their early 20’s slow walk down a high school hall way like some bad music video, culminating in a quick cut to a bad teacher joke. High school life followed by music video styled moments is largely what the audience has to endure in the slow paced build up and character development in the film. It is not until about half way through that the mystery behind the new family in town begins to unravel. The Domineering mother of five boys, whom she uses to commit crimes on her behalf. There are moments where they hint and foreshadow at mental illness throughout the film, leading to the not so shocking conclusion that the mother of five teenage boys is a little off her rocker. In fact by the time something happens, you have already forgotten it’s a genre film. Sadly all the tropes of the beautiful gypsy family full of romantic teens inevitably is…Vampires. Sans sparkles.

“Honeybee” is something of an oddity when it comes to no budget/low budget flicks, it has mostly organic acting. The audience could get a sense that principle actors actually got a long, and were interested in each other. Not academy award winning acting by any means, but Garrett Richmond did great. There was a lot of believable light hearted comedy throughout the film. Honestly most of my praise for “Honeybee” is that it did really well, as a non-genre film. Nicki Harris the writer and director did an excellent job until it came to bringing home the genre aspects of the film. If her budget was the issue and she had to choose having good actors over other aesthetics, then she made a good call. The actors and story are what drive this movie.

This film does have most of the same quirks that low budget films have, minor sound quality issues for instance, and a strange array of inexpensive music for a sound track. The music was very disjointed, mostly it had a 1980’s synth feel to it, which normally conjures up gritty streets and frantic action scenes with Don Johnson, not teens in love in a peaceful lake side town. Music that’s off is a lesser cinema sin though, kind of like actors with half sleeve tattoos pretending to be high schoolers. I am beginning to wonder if they had a makeup artist on set at all, because that should have been concealed.

Now that I have given the good, here’s the bad. I am a genre geek, a horror nerd, this film has nearly no genre elements to it. With its undertones of mental health issues, and the way the kids are set up to behave around a rather abusive mother, it could have more effectively become a psycho slasher thriller. The vampire effects and gore were anemic to non-existent. Out of a 90 minute or so film, the audience gets a whopping 3 minutes of blood, including a dabble of blood around the mothers mouth to show she fed on some one. The first scene when the mother feeds on a person I seriously thought she was a psycho cannibal, the gore was minimal and it looked more like she was eating someone’s face instead of drinking their blood.  Just a little arterial spray would have been nice.

This flick has an audience though, it would be good for people too squeamish for the good stuff or too young for the harder stuff. This film is not one that would grace my personal collection, nor would make the cut to movie night in my household. So for you more entrenched genre fans, and you know who you are, stay clear of this one.