Belcebu, legendary rock star, builds up his drug empire until the Devil offers him eternal life.

Made in Spain and distributed by Troma Team Video worldwide, Belcebu: Tomame, soy tu Puta del Infierno (translated to Belcebu: Take me, I’m Your Whore From Hell, which is certainly an interesting title) very much fits the mold for something that is distributed through Troma, yet certainly not one you would expect to be made by them. The production value is very low, and there are very few redeeming qualities through probably around 90 percent of the run time. The story is boring and hard to follow, and very little happens until the last 10 minutes of the film.

Reports of suicide surround the career of rock star Toni Belcebu, who implores his fans to worship the Devil and kill themselves, though not necessarily in that order. The timeline presented in the film is either off, or just plain confusing. About halfway through the film, Belcebu meets the devil while sitting in a bathtub. He is seduced by the demon, who appears in his demonic form originally, then changes into a “beautiful” woman to entice him further. Ironically, for a man who has been reportedly consorting with the more evil spiritual realm, is shocked by his encounter and seemingly wants to avoid actually becoming what he pretends to be.

Meanwhile, we have a prostitute who, in the beginning of the film, witnesses the death of her boyfriend while running from the police after a failed robbery of a pharmacy. She is forced to continue her lifestyle to maintain her drug habit. Our third main character, a camera man looking for work, finds employment at a pornography production company, filming bizarre fetish scenes seemingly run by organized crime. All of these stories plod along, giving us just enough to keep us from giving up and turning it off altogether, until they finally crash into each other in a batshit insane finale that more than makes up for the mundanity throughout the rest of the film.

What follows is a cacophony of sex, violence, and insanity that would find its place in any Troma film. The last ten minutes are filled with orgies and blood, as Belcebu draws his followers into a black mass of sorts, hiring our esteemed camera man to film the action and the prostitute to be one of his Satanic whores. We have ritualistic Satanic murder and rape, with one woman being killed in a method made famous by the infinitely better Cannibal Holocaust (think giant pole, small vagina, hallway through a hot dog type scenario). It’s disturbing, violent, and exactly what was needed to bring a little bit of life into what had dragged along as an incredibly boring film.

A couple of thoughts, in general, about the end of the film: First of all, who the hell does stuff like this? I mean, obviously, not many people would be particularly keen on attending a Satanic murder orgy, wherein one party is seemingly intent on summoning the Lord of Darkness. I think most people would probably balk at that. However, I know people (or have known, as I tend not to hang with folks into this sort of thing) that would’ve totally been down with attending a “Black Mass” like this. Am I just way too whitebread and “normal” for this kinda shit? Things like this actually happen, but I just simply cannot ever imagine myself in a situation where attending something like this would ever be a good idea. We’re all horror movie fans here, so some of us are into some bizarre stuff I feel sure, but would anyone really enjoy going to something like this? I honestly want to know, so if you have thoughts, please leave them in the comments.

What we end up having in Belcebu is a weird movie, very bizarre and hard to understand. There’s very little in the way of special effects, and, again, most of the movie is pretty boring, but the last ten minutes are completely insane.

The last scene is filled with creative gore, winged demons, and giant, floppy Satan penis. It’s just… a weird movie, man. There’s really not much else that can be said about it. It’s not one that I would recommend, unless you can find the balls-to-the-wall last 10 minutes by itself. Otherwise, it’s a giant waste of time, even at a relatively sparse 1 hour and 17 minute run time. But I’d rather watch Cannibal Holocaust and get a much better film, even if I’ve seen it before, than watch this one and see new stuff that isn’t worth seeing. Check it out if you particularly enjoy Spanish movies about devilish rock stars. Other than that, avoid at all costs. 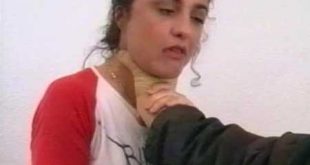 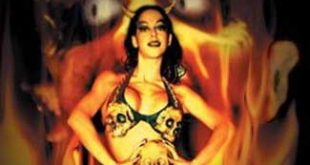 Belcebu, Satan and chick on a stick