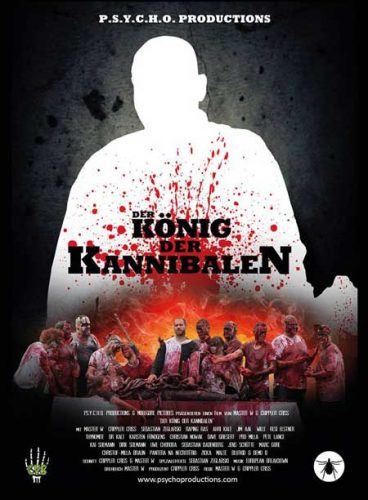 The King of the Cannibals”, aka “Cannibal Messiah”, the second work in feature film length from the house PSYCHO PRODUCTIONS. Content a continuation of the found footage short film “The Last Cannibal

Der Konig der Kannibalen (aka King of the Cannibals or Cannibal Messiah) is a slapstick, goofball splatter film written by Master W and co-directed by Master W and Crippler Criss (see also the segment entitled “The Secret of the Magic Mushrooms” in Troma’s Mutantz, Nazis, and Zombies collection). It would appear that together these filmmakers go by the name of P.S.Y.C.H.O. Productions (you can’t help but notice that half the cast is wearing that company’s t-shirt). I wouldn’t have thought that a low budget comedy about cannibals that runs close to 120 minutes would be something I’d enjoy, but it turns out I was very wrong. 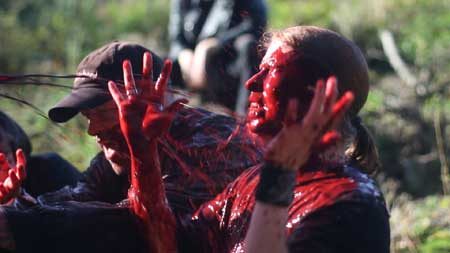 The story of Der Konig der Kannibalen revolves around Master W and Crippler Criss making a documentary. Kind of. They are taken hostage by the Pathfinder (played by a guy named Raping Ras[?]) who forces them to lead him to the place where the hermit and the beast live, because they had something to do with the death of his brother, and W and Crippler decide that they might as well film a documentary about the expedition. Okay, this sounds confusing already, but it clears up soon enough. Anyway, the hermit is a cannibal who lives in the middle of nowhere, and the beast is what became of the small child the hermit was entrusted to look after. When the trio finds the hermit’s shack, he tells them that the beast is now with Alan Yates, who was a friend of Master W and Crippler Criss’ and who was thought to have been killed by cannibals, but who in actuality is now the leader of a group of cannibals who live in the forest. Well, not so much their leader, more like their messiah…and now that everything is seemingly out of control, we’ve come back to the title of the film and maybe it didn’t clear up so much, did it?

The thing is, there’s this tunnel, and there are stories that when people go into it, they come out “changed.” For example, the child the hermit was watching sneaks into the tunnel, and hours later comes back out as a painted-faced crazy cannibal, now known as the beast. But Alan figures out that the other side of the tunnel is the perfect place to set up his new society (which he names Carnesalem), and so has his followers drugged so as not to experience whatever evil is in the tunnel, and so when they come out the other side, they might be a little dizzy, but they are still themselves. And that is why they name him the Cannibal Messiah. Oh, and there are also these various video cameras that people find, and on them are scenes from the future, which is because time is not linear, it runs in circles. And I’m realizing that to read this plot synopsis makes Der Konig der Kannibalen sound completely crazy, and it just might be, but this is a comedy after all, and that’s a good thing, right? 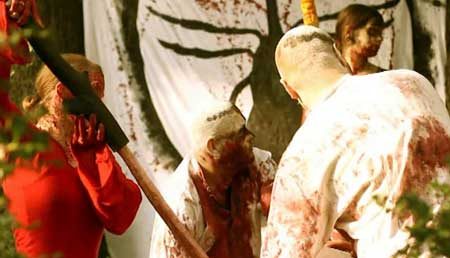 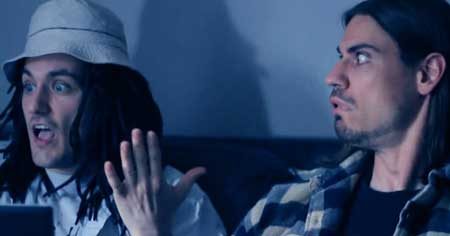 The cannibals in this film aren’t from savage tribes like in Cannibal Holocaust, but rather regular, everyday men and women who have simply decided that cannibalism is a better diet for them as well as for the planet (over-population and all). But that doesn’t mean they’re not just as brutal and bloodthirsty. They’re still eating human flesh, which means catching living human beings and killing them. They just happen to belong to a different subculture, further north from the cannibals of the green inferno. The other thing that this film holds in common with the cannibal films of old is that it is brutally bloody and gory. A cannibal is a cannibal is a cannibal, and a cannibal movie is a cannibal movie. 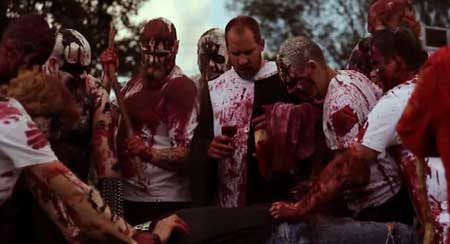 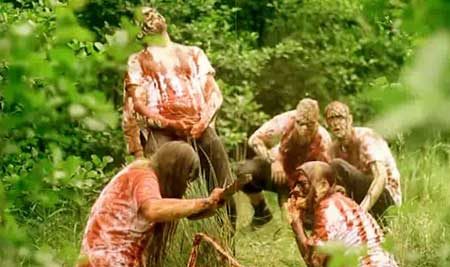 Der Konig der Kannibalen is a dark, irreverent comedy that grabs you and holds on throughout, despite the confusing nature of the story. It has the type of humor that you might find in a movie like Airplane! or The Naked Gun, if those movies also involved cannibals, mixed with the all-out, over the top blood and violence of Evil Dead or Dead Alive. In fact, trying to synopsize this type of movie probably does it more of a disservice than is intended; it’s like explaining what is funny about a joke to someone who hasn’t heard the joke. Just know this: this is a comedy/horror for people who enjoy their jokes slapsticky and the blood bright red and flowing, as much a tribute to German horror and cannibal films of days past as it is a wholly new experience. I went in assuming it was going to be a real drag, and I came out two hours later a smiling new fan.