Horrornews.net and Universal Pictures Home Entertainment presents The Purge: Election Year GIVEAWAY!  To Enter the Giveaway, Email joyhorror@msn.com and put “The Purge: Election Year Giveaway” in the subject line, and then in the body of the email,  (1) What HORROR Icon would you vote as President of the United States in this coming 2016 Election? (2) Your Full Name, (3) Your Complete Mailing Address.  Winners will be picked at random, United States Residents ONLY 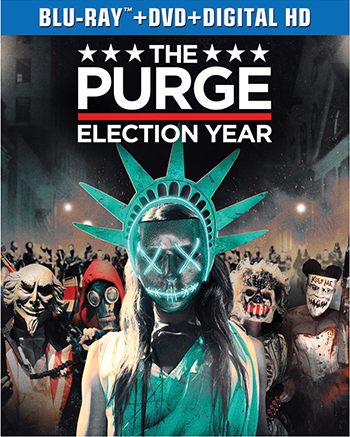 AVAILABLE ON DIGITAL HD ON SEPTEMBER 20, 2016 BLU-RAYTM COMBO PACK, DVD AND ON DEMAND ON OCTOBER 4, 2016 FROM UNIVERSAL PICTURES HOME ENTERTAINMENT

Universal City, California, August 15, 2016 – Director and writer James DeMonaco (Assault on Precinct 13, The Negotiator) delivers the best and most action-packed Purge yet when THE PURGE: ELECTION YEAR, the third chapter in the thrilling franchise, arrives on Digital HD on September 20, 2016 and on Blu-rayTM Combo Pack, DVD and On Demand on October 4, 2016, from Universal Pictures Home Entertainment. As the government prepares for its annual Purge, the one night a year when all crime is legal, America’s New Founding Fathers are faced with strong opposition from a presidential hopeful and her supporters who wish to abolish the country’s violent tradition. With deleted scenes, a character spotlight, and a behind-the-scenes look at the making of the film, THE PURGE: ELECTION YEAR offers viewers a closer look at the disturbing, thought-provoking and timely thriller.

It has been two years since Leo Barnes (Frank Grillo) stopped himself from a regrettable act of revenge on Purge Night – the 12 hours of lawlessness. This year, the annual ritual comes at the eve of a heated presidential election with the nation deeply divided between those who are pro- and anti-Purge. As head of security for Senator Charlie Roan (Elizabeth Mitchell), Leo’s mission is to protect her during her controversial and contested run for president. But when a betrayal forces them onto the streets of Washington, D.C. on the one night when no help is available, they must stay alive or both be sacrificed for their sins against the state.