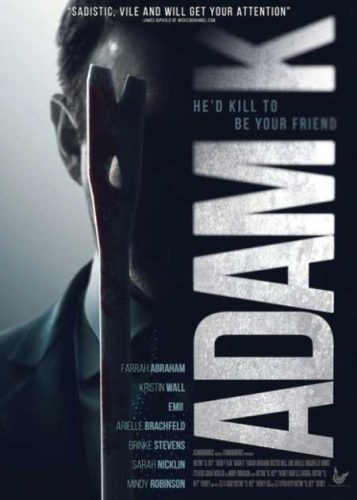 A day in the life of mild-mannered and seemingly good-natured auto insurance claims manager Adam Kraul. He sets out to be a do-gooder and make friends, however ends up with mutilated victims in his wake when his invitations for friendships are rejected.

Late in the 2016 thriller Adam K, one of the central characters is run through by the sharp end of a crow bar, which is thrust entirely through her body from back to front, must certainly have ruined one or more of her key internal organs, and very likely may have severed her spinal column. Moments later, after the crude steal spear is pulled savagely out of her, she spends the rest of the film walking with a slight limp.

I point this out just in case the remainder of this review suggests that Adam K is a credible, high-quality film.

Everyman insurance agent Adam (Dylan Hobbs) is a miserable, socially-awkward loner in a seemingly endless quest to make a meaningful connection with a fellow human being. He reaches out to former clients just to have conversations. He mistakes professional courtesy for romantic interest. And he pines for the friendly girl in the apartment next door but can’t summon the courage to speak to her. When he literally bumps into kind stranger Michael on the street, Adam latches onto him, determined to be friends.  Michael, however, is going through some personal turmoil of his own, and Adam decides that the best way to support his new BFF is to go on a brutal killing spree to right the wrongs that have been committed against Michael.

Even as unhinged, indiscriminate killers go, though, there is apparently more than meets the eye with Adam. It turns out that he may not be exactly who he says he is; and, with a gaggle of the dumbest, most incompetent cops that the L.A.P.D. has to offer hot on his trail, Adam sets his sights on a victim that is neither random nor anonymous…a victim that he may have been hunting all along.

Thus is the parchment-thin story of Adam K.

In what turns out to be a rather interminable 93 minutes of barely-coherent plotting and dialogue, there are actually a few bright spots. 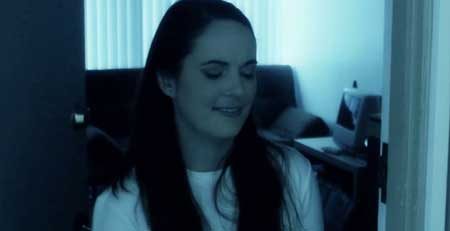 Writer/director/producer Joston Theney has delivered an impressively technically sound film, with special kudos due to the cinematography and camera work. Though inconsistent and at times unmotivated, the filmmakers’ use of color and light adds an element of compelling visual appeal, especially the cool blues that dominate early and the rich atmosphere that saturates the entire film. Similarly, the camera moves confidently through the scenes, with plenty of interesting composition and frame design that support the narrative and propel the action forward. Overall, the production values—with somewhat jarring exceptions when poor sound recording or awkward edits undermine the broader product—are strong and largely overshadow the bordering-on-incoherent narrative and occasionally mind-numbing dialogue.

The performances, however, vary broadly, from interesting (John Charles Smith as a senior detective; Brinke Stevens as Adam’s “mother”) to inconsistent (Edward Gusts as Michael) to downright weak (Kristin Wall as the rogue lead detective on the case). In fairness, most of the roles are badly underwritten; and uttering some of the lines that come from these characters’ mouths must have been a colossally painful assignment for the actors, who are—for the most part—unable to rise above the material.

The exception is Dylan Hobbs in the title role of Adam. Oddly, Hobbs’ credit is left off of the film’s IMDB page, and his name is conspicuously missing from much of the film’s promotion. It could be that the filmmakers want to cultivate a sense of mystery and intrigue around the film’s villain in order to play off of the anonymous, everyman nature of their killer; but in the humble opinion of this writer, they should put Hobbs front and center in their promotional effort for Adam K, because he is pretty much the best thing that they have going for themselves.

Though Hobbs stumbles over some of the same impediments that trip up his fellow cast-mates, he modulates his performance commendably and manages to make Adam sympathetic at some moments and genuinely menacing at others. Hobbs is especially adept at embodying Adam’s inability to function socially, and he hooks the audience effectively in an early scene in which he telephones several different people in a desperate effort to make a connection with another person on his birthday. Later, when it comes time to scowl and hiss and go all crazy-eyed-killer on his victims, Hobbs deftly flips the switch and turns into the kind of deranged villain that—if everything else had worked equally as well—could have made Adam K an interesting, successful thriller.