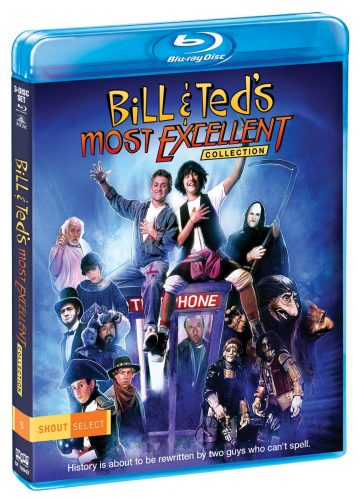 Two seemingly dumb teens struggle to prepare a historical presentation with the help of a time machine.

“The funniest comedy in the history of history” 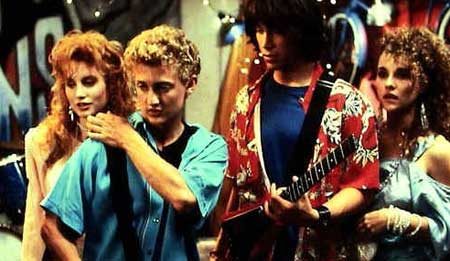 The plot here is simple (which was not uncommon for 80’s comedies of this nature). Two struggling valley students Ted ‘Theodore’ Logan (Keanu Reeves) and Bill S. Preston (Alex Winter) are on the brink of failing high school due to bad grades and a lack of seriousness. These San Dimas residents have set their sites high on the dysfunctional idea of a future rock band called “Wyld Stallyns”. The drive is there but the talent, playing chops, and music simply isn’t let alone decent instruments. With the  2 of them now facing a final that includes a school report they have to present on, well…..things are looking grim with the threat of an Alaskan military school being held over Ted’s head. The goal of the film is even simpler….. keep Bill and Ted together by passing the exam to keep the future of mankind on course. 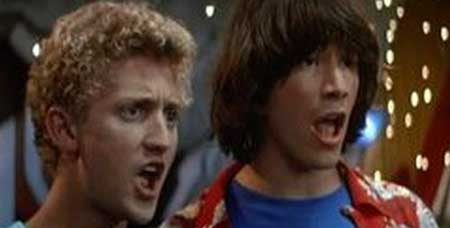 Little does the both of them know that their efforts and actions will result in future peace and harmony for all of mankind. With the future hanging in balance, agent Rufus (George Carlin) is sent from year 2688 to guide the boys on the right course by setting them on an adventure thru time. The vehicle of choice? An old phone booth that visits historical moments by a dialing them in. 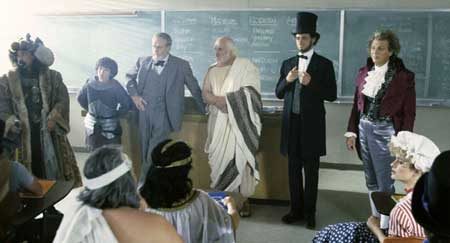 As the quest begins and the knucklehead team of Bill and Ted set their motions into gear, they decide that the best route of choice would be to kidnap famous historical figures for their high school presentation. The duo provide laughs and absurdity as they dip thru-out time collecting figures such as Beethoven, Sigmond Freud, Joan of Arc, Genghis Kahn, Napoleon, Billy the Kid, Aristotle and even Abraham Lincoln (thus shoving them into their transportal phone booth).

The 2 of them must do so under the condition that time is still ticking away as they left it back in San Dimas while they collect. As expected, it’s a bit of sy-fy valley-slapstick echoing the influence of Fast Times at Ridgemont High and Doctor Who combined. 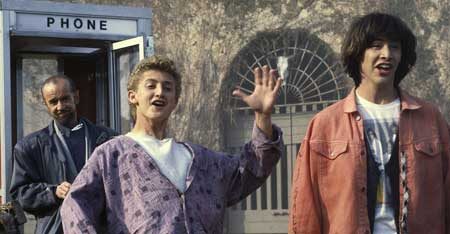 Miday thru their journey, Bill and Ted discover that the world has come to know them and their music as the root of peaceful and harmonious living inciting their token slang phrases such as: “party on dudes” and “most excellent”! Rufus and the 3 Supreme Beings reach out from year 2688 to set the motions of time into play by guiding the actions of these 2 young teens. For those trying to place the names with a familiar face, Jane Wiedlin (The Go-Go’s guitarist) played Joan of Arc with Fee Waybill (lead singer of The Tubes) playing one of the supreme beings. Beethoven’s musical showcase is backed by a re-edited portion of Extreme’s “Play with Me”.

Bill and Ted even manage to capture the hearts of 1461’s Princesses Elizabeth (Kimberley Kate’s) and Joanna (Diane Franklin) who are destined to become the final 2 members of Wyld Stallyns.

It a “bodacious” ride to say the least, that while silly and dated is still a hoot to sit thru. The movie wears it’s 80’s humor on it sleeve while trying leave behind a few cultural catch phrases along the way. Fans of the film will enjoy taking a new gander at an old favorite that still holds its own, decades later. 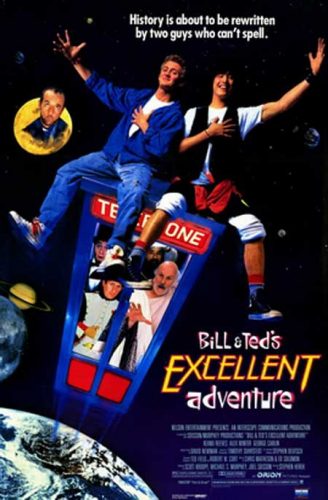 The soundtrack provided is pretty decent with the song “Two heads are better than One” acting as the film’s token anthem. Bill & Ted’s Excellent Adventure was well received warranting a follow up sequel in 1991 titled: “Bill & Ted’s Bogus Journey”

The film now arrives on bluray per Shout Factory which includes both films as a special double-set release pack.