Rocky, a young woman wanting to start a better life for her and her sister, agrees to take part in the robbery of a house owned by a wealthy blind man with her boyfriend Money and their friend Alex. But when the blind man turns out to be more than just a helpless victim, the group must find a way to escape his home as they find themselves to be the prey.

One thing is for certain, director Fede Alvarez knows how to make visually dynamic films. I wasn’t even that much a fan of his last film, the remake of Evil Dead (2013), which had style and pizazz up the yahoo, but was a strangely soulless exercise. But its success made him a hot name, and there were more than a few people (myself included), that were very curious as to what his next feature would turn out to be. Three years later, Alvarez has unveiled Don’t Breathe, a film that does showcases his wizardry with camera choreography and shot composition. But pretty pictures, and thrilling camera movements don’t mean much of anything if they’re in a horror film that’s thrilling at times, but hardly scary. 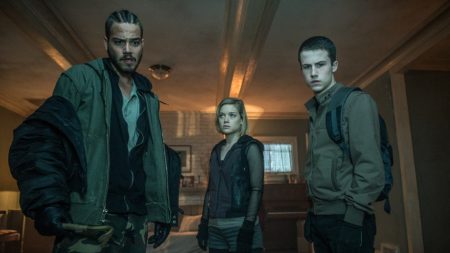 Rocky (Jane Levy), Alex (Dylan Minnette) & Money (Daniel Zovatto), are three small time hoods from Detroit, who make their living breaking into some of the tonier homes left in the ruins of what was once a bustling city. Alex’s dad works for a security firm, so he has access to a slew of special keys and devices that make it easy for him to break into homes. But he has one rule: No money is to be taken. Goods are fine, because they get immediately sold, but stealing money constitutes a more serious crime, and Alex wants no part of anything that can get him jail time. Money isn’t satisfied with what they’re getting in return for their hauls though, and he gets word about a blind veteran (Stephen Lang) who lives alone in a largely abandoned neighborhood. The story goes that his daughter was killed in a hit and run accident, and he settled with the family of the young woman who was behind the wheel of the car that killed his daughter for $300,000. All they have to do, is sneak into his home in the dead of night, find the money, and sneak back out without waking him up at all. Sounds easy, right? 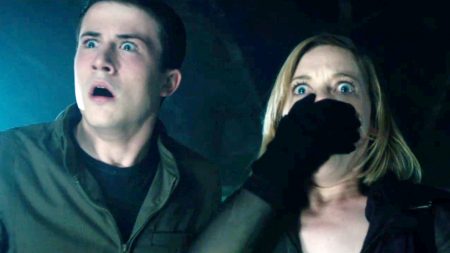 Come on people! Nothing is ever as easy as it seems. Especially in the movies. What our trio of sticky fingered thieves fail to consider is that maybe their intended prey isn’t as helpless as he seems to be. And once they find out that indeed he is a force to be reckoned with, they’re hopelessly trapped in his house. And once he turns out the lights, they find themselves caught like flies in a cobweb. He obviously can’t see a thing, but now neither can they, and he knows the layout of his home, they don’t. And there you have pretty much the entirety of Don’t Breathe, a film filled with scenes of people reaching out in the dark, people getting knocked out, people regaining consciousness – then getting knocked out again, people being chased by a big dog, people getting shot at, people getting caught, escaping, then getting caught all over again, etc, etc. Don’t Breathe wallows in the tropes of the prototypical suspense film so blatantly, that it eventually falls prey to it’s own hubris, and becomes rather redundant. 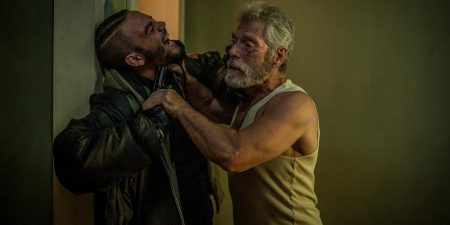 Making matters slightly better is the idea of forcing the audience to switch loyalties repeatedly through the film. We’re solidly in the blind man’s (the character has no name, he’s simply “The Blind Man” in the credits) corner as the film progresses, but once he turns the tables, we’re kind of rooting for the thieves to prevail. But then Alvarez (& co-writer Rodo Sayagues) toss a monkey wrench into the works, a rather unique one as well. Then you’re kind of back in the blind man’s corner, but then something else happens, and you’re back with the thieves, and so on. The idea of making your audience flip flop between its loyalty to any one character is very well done, and very effective for awhile. But Alvarez just keeps piling it on, and eventually I just didn’t care who made it or didn’t, I just wanted some sort of resolution. Don’t Breathe also suffers from the dreaded “Too many endings” syndrome, where a film feels like it’s about to end, and then suddenly picks up a new head of steam and continues for 5 more minutes, only to wind down and wind up again. And again. And again. 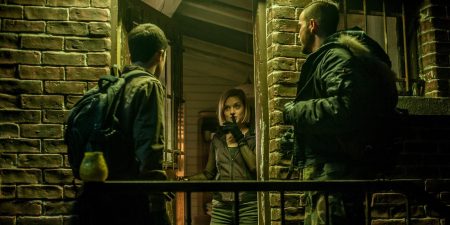 Now while all of this might sound like I’m trashing the film – I’m not. In fact, I rather enjoyed Don’t Breathe for what it turned out to be, a masterfully crafted exercise in suspense. It has all of the required bells & whistles to keep an audience on edge, and the fact that the main section of the film is largely without sound is both daring, and (in this case) successful. The actors all compart themselves nicely as well. Ms. Levy (returning from Alvarez’ Evil Dead remake), is a compelling and sturdy final girl, although I was a bit tired of seeing shots of her crouched on the ground, with her hand held tightly across her mouth. Minnette is the “Good Guy” of the thieving trio, and he comes off as a compassionate thief that looks a lot like Jimmy Olsen. Zovatto is pretty much eliminated from the story in the first 15 minutes (The trailer handily spoiled his fate for everyone), but he’s appropriately scuzzy. Stephen Lang is what makes Don’t Breathe eminently watchable. His take on the role of the blind man works on a few different levels, and it’s fun to see him go through the evolution from victim to villain, and back to victim again. Cinematographer Pedro Luque does a great job of making the inside of the house feel as large as a 50 room mansion, but still making it feel as cramped as a small closet at times. 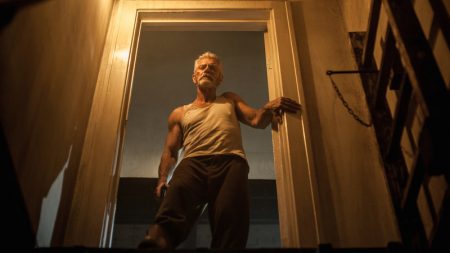 So yeah, Fede Alvarez knows how to make visually exciting films that look nothing like any horror film you’ve seen before. Unfortunately, Don’t Breathe isn’t exactly a horror film, as it’s being promoted as. Perhaps my being jaded has something to do with it, but Don’t Breathe isn’t at all scary – not in the conventional sense anyway. Oh, it has the expected jump scares (Although not as many as I expected), and it’s little twist 3/4 of the way through is indeed unique, but there are people calling this the most relentless horror film in recent memory. Trust me, it’s nowhere near that lofty status. What it is is an undeniably exciting thriller that kept the audience I watched it with rapt with attention, and they screamed out loud a few times as well. While I too was fully invested in what was going on in front of me, I didn’t feel a need to scream at anything except the price of a coke with lemon ($5.99? Really??). Don’t Breathe is a hell of a lot of fun though, despite it being relatively scare free, and it’s well worth a watch.

Don’t Breathe is now available on bluray per SonyPictures