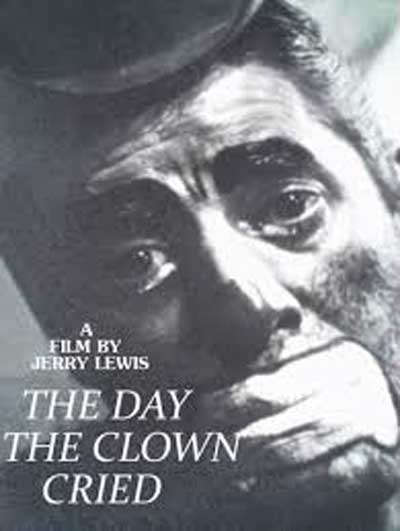 A circus clown is imprisoned by the Nazis and goes with Jewish children to their deaths.

ok I have something a little different for you today. Not technically a horror film, but horrific in its subject matter.

Recently, the long lost Jerry Lewis film THE DAY THE CLOWN CRIED has resurfaced. A 30 minute edit of the film appeared on Vimeo, complete with German language commentary and some behind the scenes footage of the production. Some of the footage was apparently lifted from a recent German documentary “Der Clown.”

Mr. Lewis has long distanced himself from this unreleased project, even going so far as to refuse to speak of it if asked. He has gone to great lengths to keep it from being seen. He donated a copy to the Library of Congress, with the stipulation that it not be released until a certain date. I’m assuming he thought it would be a date at which he would be long dead and not have to answer for it. 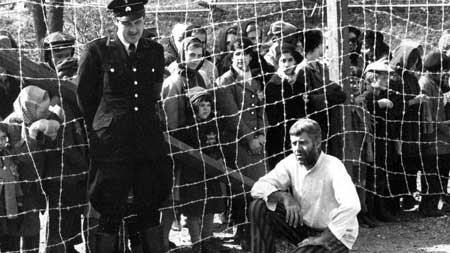 Now, I know Jerry Lewis from slapstick comedies and his Martin and Lewis days. The idea of a film like this, starring a comedic actor, seemed so repulsive and disrespectful to me when I first heard of its existence that I couldn’t even imagine the festering pile of garbage this film must be.

I WAS SO WRONG.

If you’ve never heard the rumours of this mythical film, the story focuses on a circus clown named Helmut (played by Lewis) and set at the height of World War Two.  Helmut is kind of a mess. His career was tanking, having been replaced by another performer as the star clown in the circus. Having been relegated to “stooge” (assistant to the clown), Helmut falls into alcoholism and depression. His long suffering wife tries to pull him back, but to no avail.

It is in a drunken stupor in a bar that he rages against the rise of Hitler and the SS, which is how he comes to the attention of Hitler’s secret police. He is arrested as a traitor and sent to a Nazi concentration camp.  He is fortunately kept on the “Aryan” side, but feels compelled to entertain the Jewish children through the fence every time he is in the yard. 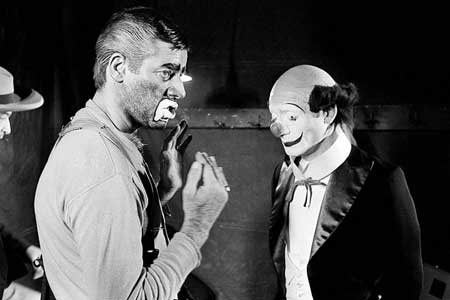 Helmut’s attempts to entertain the Jewish children are met with glee by the kids, but with disdain by the officers in charge. Helmut is punished again and again for doing it, but he seems unable to stop. One wonders if he is doing it because of the children or because of his need to feel special once again.

The film never really answers that question, at least the short edit does not.  I’m certain the full version probably addresses this question, as well as the unknown fate of Helmut’s wife. We only see her in the short edit up to the point where Helmut is arrested and we don’t see her again, nor is she referenced in any way. 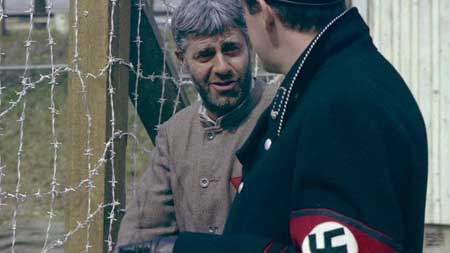 Eventually, the officers in charge of the camp realize that Helmut could be a useful tool in controlling the Jewish children. He is conscripted to keep the children quiet and entertained as they are transported by train to…well, you know where they are going. So does Helmut, and still he does what he has been ordered to do.

The train arrives at its destination, and the children are ordered onto a truck. But they won’t listen to the soldiers. They all turn to Helmut, whom they have come to trust. Again, Helmut is forced to lead them closer to their destruction.

It gets worse, if that’s even possible. See, the commander that told Helmut to do this in the first place has reported him as an escapee. This means that if he wants to save his life, he has to do what is demanded of him. And that is to lead the children, laughing and singing, into the gas chamber for the final solution. Either that, or he will join them in death. 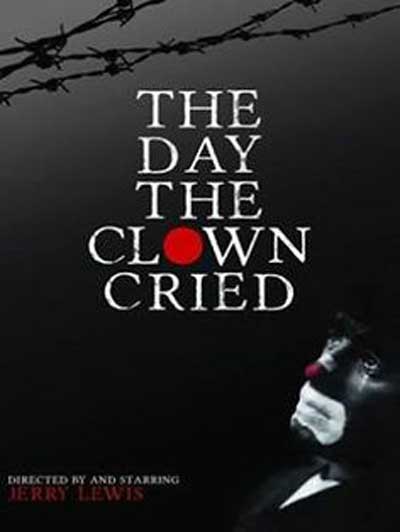 There is something else going on that I can’t work out, as I don’t speak German. Only portions of the short edit are subtitled in English.  It would appear to be a group of survivors, possibly other prisoners who remember Helmut, gathered to tell the story. The old men are on a black box stage, playing out the events for the camera.

Now I know what you’re thinking and it’s probably not much different than what I thought when I first heard of this film – the idea of Jerry Lewis doing a bunch of funny face “yuk yuk” stuff in a setting like this is just appalling. But that’s not what happens at all.

Sure, there are a few isolated moments where he is entertaining the kids through the fence, doing walrus impressions and the like. Nothing so over the top as to make this film disrespectful or offensive. Just a washed up circus clown trying to make the best of a terrible situation and spread some joy in a place where there is none.

Personally, I never held much faith in Mr. Lewis as a dramatic actor. In this film, he is absolutely incredible. His performance is beyond description. I don’t know why he has hidden this performance from us for so long. Maybe at the time the film was made, Mr. Lewis felt that theater audiences just weren’t ready for it.

Mr. Lewis, for whatever reason, chose to bury this film. But this is an important film, with brilliant performances, that tells a story we should never forget. This is a unique perspective on the horror of the camps, a way of telling the story of the Holocaust that hadn’t been done before.

I won’t lie…this film is hard to watch even in the short edit. It’s only been about 70 years or so since the atrocities of Hitler’s campaign happened in the real world. There are still people alive today who were there and remember. It’s a raw nerve to pluck, but it is so very important that such horrors never be forgotten lest they be repeated.

So one a scale of one to ten, ten being awesome, I’m giving this film a ten. It’s amazing, and totally worth the years we’ve waited to see it.

**EDIT NOTE** as of this writing, the Vimeo link for the film has gone dead.