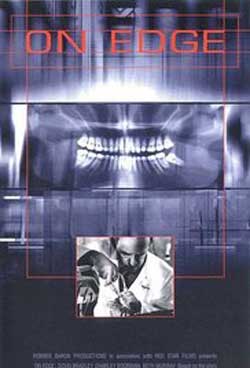 An impatient dental patient gets more than he bargained for when he meets enigmatic dentist Doctor Matthews.

Another short film, folks! Today we have ON EDGE from Robber Baron Productions, written and directed by Frazer Lee, based on the short story by Christopher Fowler. This film is actually dated 1999, and is the first of three short films directed by Mr. Lee.

There is so much awesome going on with this film, I hardly know where to begin. Let’s start with the cast – we have Doug Bradley (Pinhead from the Hellraiser film series) and Charley Boorman (who played in Excalibur and Deliverence, among many other things). Really, anything with Mr. Bradley in it is already gold in my opinion. I can listen to him talk all day. 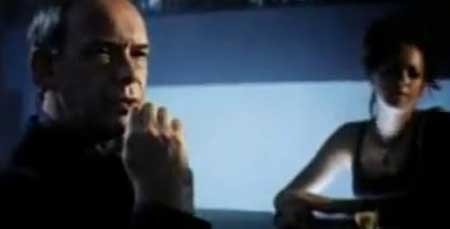 The special effects are created by Bob Keen. If you don’t know that name, you do know his work. He has worked on effects for Return of the Jedi, Highlander, Nightbreed, Hellraiser 3:Hell on Earth, along with so many other films over the years.

Cinematographer Alan Stewart did an amazing job capturing the story on camera. Not surprising when you consider his credits, though. Sherlock Holmes, Spectre, Pride Prejudice and Zombies. Literally an almost endless list of projects.

So much experience on this film between cast and crew results in a really good short film.

Our story takes place in a dentist’s office. Peter Thurlow (Charley Boorman) has a broken tooth and is not willing to wait for his turn, and inpatiently badgers the receptionist for an appointment. Seems his regular dentist is on holiday, but lucky for him Dr. Matthews (Doug Bradley) has an open chair.

A lot of the story is shot from the patient’s perspective in the dental chair. I really hate the sound of dental tools. Makes me cringe. And if you’ve ever had an extensive dental appointment, like a root canal or something, you know that the dentist will yammer on about whatever. Of course, you can’t really engage in the conversation due to a mouth full of tools. But the dentist just yaks away as the drugs kick in.

Like I said…I could listen to Mr. Bradley talk all day long.

Oh, and stay through the credits. There is a short featurette of outtakes at the end. Kind of fun to watch Mr. Boorman and Mr. Bradley screwing around on set.

So using my special short scale of one to five, five being awesome, I’m giving this film 5 root canals.