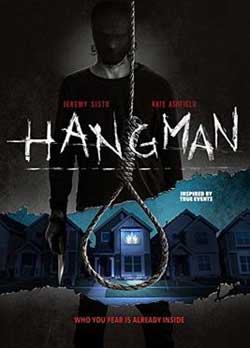 The Millers return home after a vacation and discover that their home was robbed. After the mess is cleaned up, they have no idea that their nightmare has just begun.

Sometimes one little twist is enough to make a mediocre experience feel like something far more important.

I remember the first time I’ve watched Maniac (the remake, 2012). I loved the idea of looking at the events from the titular character’s POV. This film wasn’t even very good, but this one little change made it more memorable than it should have been. I mention Maniac in this review, because director Adam Mason (The Devil’s Chair) tried to pull a similar trick with his 2015 found footage movie – Hangman. 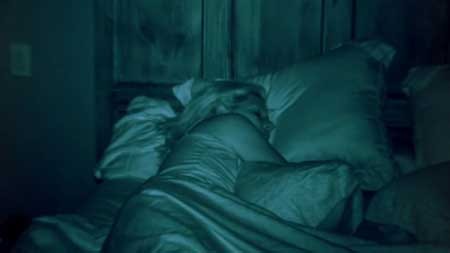 The horror film market is oversaturated with found footage flicks, so it is natural that filmmakers want to make their creations stand out in some way – sometimes they succeed, sometimes the fail, but at least some of them are trying. Adam Mason went the Maniac route – he makes a viewer follow the villain. Well, at least he tries to, because even though the film isn’t particularly long (85 minutes) the way it is produced makes it feel like ages before anything worth-watching happens. And I don’t mean it in a good, slow-burn-thriller kind of way.

But let’s save the complaints for later and talk about the plot first.

A happy family returns from a vacation only to see that somebody broke into their house. The burglar left a hangman picture painted with ketchup and a mannequin hung on a noose in a closet. They call the police, but because nothing else seems to be wrong they decide to forget about the whole event and carry on with their lives. What they do not know is that the culprit put multiple cameras in their house and is watching their every move from a hideout/surveillance center he arranged for himself in their attic. 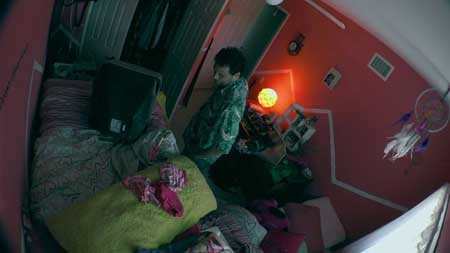 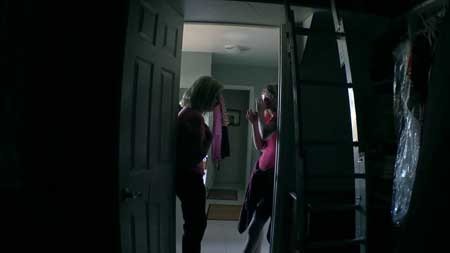 I have to admit that I was impressed by Adam Mason’s insight into human nature because the event of one’s privacy being invaded is one of the most traumatic things that can happen to a human being, so addressing this issue is a safe way to make characters relatable. Sadly, in this case it doesn’t work. The irony is – it is because of this little change that was supposed to make Hangman memorable and interesting. Since we meet the family at the very moment the antagonist starts watching them, there really is no time for the viewer to learn anything about the Millers (that’s the name of the family). I would love to get invested in what happens on screen, but I had no background information about these characters whatsoever. If I saw a story like this on the news I’d be shocked and full of compassion for the poor souls, but this is a movie – I don’t give a damn by definition, it is the director’s job to make me care. A job he did not do very well. 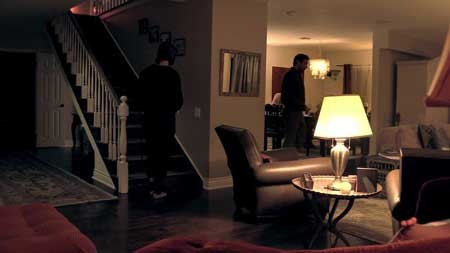 The performances, on the other hand, are surprisingly good. The stalker/killer is creepy enough to be believable, and the Millers make for a likeable family, but still not likeable enough to make watching them sleep, talk and eat interesting. I may be repeating myself, but this is the greatest flaw of this film. After very strong opening scene where we see (from the first-person-perspective) a previous victim being stabbed multiple times, the viewer has to sit through approximately 45 minutest of the Millers sleeping, arguing a couple of times, having sex (once), and the stalker sneaking from his hideout at the attic to drink, eat and create a nuisance (like spitting into a bottle of orange juice or stealing stuff in order to mess with his victims’ minds).

I am exaggerating a bit, because there are two brief, but pretty gruesome kills in the middle section that make things seem a little bit less boring, but this feeling does not last for long.

And in case anybody wants to ask if the ending makes it worth the wait: No. It doesn’t. The ending is rushed, too safe and overall disappointing, especially for a film with mid-section this long and tedious. 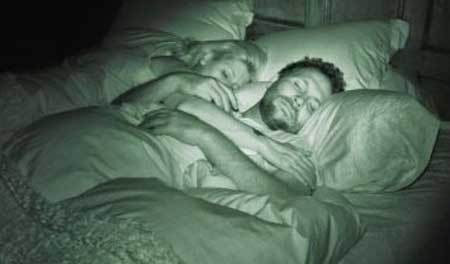 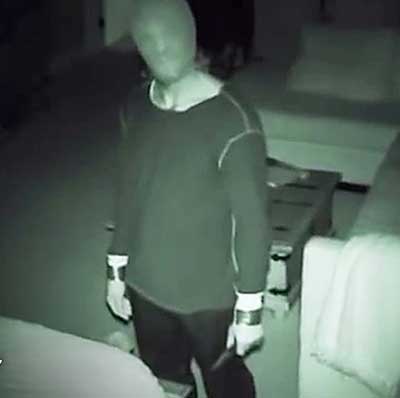 To be fair I have to mention that the image quality is very good for a found footage movie – the stalker definitely spared no expense when it comes to his morbid hobby.

In conclusion: Hangman is a perfect example of how a seemingly brilliant idea (found footage home invasion film from the invader’s POV? Sounds great!) can be ruined by poor production.

This movie has all the flaws typically associated with found footage format and a stigma of wasted potential, which only adds to the resentment.