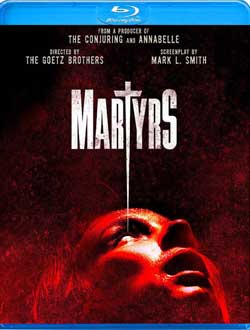 A woman and her childhood friend seek out revenge on those who victimized and abused them.

The film Martyrs written by and originally presented in 2008 was an important film for the genre. Pascal Laugier managed to walk away from this one with many referring to him as a “visionary”. In the same respect, it became an instant cult fan film that still to this day has “not” received a proper US bluray release…go figure? 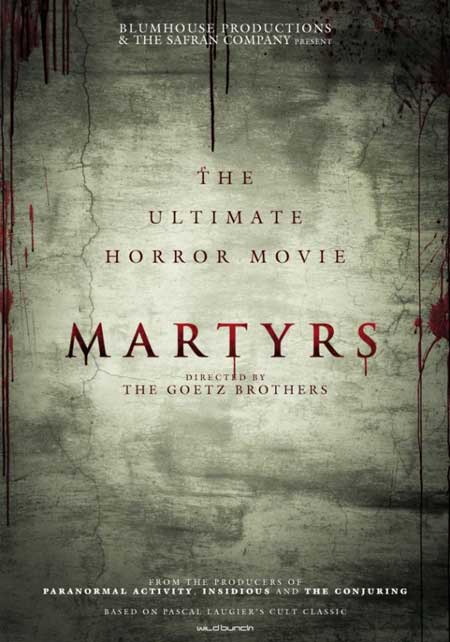 Go figure that much less adequate films are rushed to bluray without offering less than anything new, refreshing, or philosophically intriguing as the Martyrs original release. With that said, this film will not find many reviews that don’t compare it to its French subtitled release of 2008. Perhaps it sat on the shelf till a proper US version (without need for subtitles) could be produced and released out the US audiences. Perhaps Laugier was hoping that it might enjoy the same respect that the Asian-inspired US release of “The Ring” found by waiting for such a production?  The jury is still out till the numbers are counted…. but in the meant-time, we horror reviewers can delight in re-watching this film under new actors, directors and production crews… The question remains, does it live up to its counterpart?  I’m here to tell you.

For viewers who have never seen the original, I believe there may be an extreme engagement period of intrigue and wonder as the film is presented. The movie does a clever thing by keeping its premise in total mystery till the last act, one that almost demands attention to resolution providing certain answers to its viewers. While the viewers do get quite a few answered, it remains a movie that ends on a question mark. One that deserves long debates over what was really meant by the characters last few moments.

Martyrs (2015) is a pretty solid original idea of a film if left as a standalone. What suffers here is that those who are more than familiar with the original …..know that Martyrs (2015) is a dumbed down, censored version lacking alot of the visceral appeal we were attached to in 2008. If simply dismissed as torture p*rn, then the 2008 debut was not realized for the powerful film it was. Those elements taken away (as in the 2015 US remake) reduce the film down to only a tinge of what was suggested. Our character Lucie (Martyrs (2015)) is tortured to death for the pure satisfaction of getting her to a state of blissful euphoria that can transcend worlds and communicate back to her tormentors what “awaits”. This level is referred to as achieving Martyrdom, which is a level that very few over the centuries have achieved. In the background, an elite secret organization conducts experiments on hopeful candidates they believe will outlast the pain and suffering to live long enough to reveal what lies beyond. 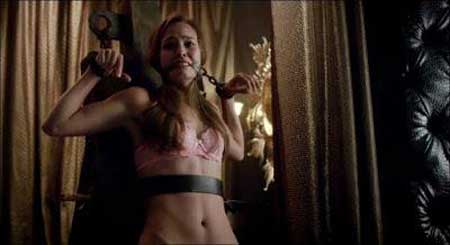 Simply enough, this is the whole purpose for our victims suffering. In Laugier’s 2008 film, we see Lucie beaten to extremes, suffered, and then skinned alive to the point where we as viewers are fully engaged in her pain and torment.  The 2015 version lacks this extreme element that made the original “that” much more powerful. In 2015’s more censored version we’re are taken on a journey that only “suggests” rather than demonstrate. A few electrocution sessions, some bruises and a implied skinning only wet the whistle without satisfying the appetite. It’s too bad that Directors Kevin and Michael Goetz failed to realize this important visual engagement Laugier provided. Viewers are strongly suggested to seek out the original after seeing this version to get a better sense of the true horrific nature intended here.

Martyrs (2015) introduces actress Bailey Noble as Lucie’s best friend Anna. Anna has supported Lucie’s claims over the years, despite the fact that she didn’t really believe them. It is the murder of Lucie’s original captors (the family) that brings all the stories into reality. However, it is the discovery of the secret rooms below that really spark Anna’s belief.

Things go from bad to worse with the both of them soon being discovered by the organization responsible. Lucie finds herself now years later back where she started with Anna now also learning per firsthand experience. Lucie is flagged as a strong contender for outlasting severe torture sessions while Anna is given a quick narrative into the organization’s real intention for their actions. After what seems like a long stretch into the meat behind this tale, we learn that the group has been testing girls for endurance for quite some time all with the intention of finding one who will last long enough to crossover and communicate her experience back to them. A pretty tall order for a group of elite-esque psychos…….. but, none the less, an interesting idea.

So here is the “come to Jesus” moment…. reading on may ruin the ending with a few spoilers. If you turn away now, we won’t hold it against you till you’ve had a chance to view the film………

Martyrs holds an ending that is at first shocking and somewhat non-conclusive to its audience. Was it intended as an insult to your emotional journey or was it unfinished and did (original writer) Pascal Laugier simply give up and call it a day?

I’m here to tell you that none of that is true. The ending is perhaps one of the most important endings in a long time…one that needs proper explanation. Whether Pascal Laugier commented on his intentions or not, it was clear where this left off many years ago as I pondered what I just watched.

Lets take a step back. The last act reveals a group of elitists gathering in anticipation of the outcome.

These are not the models of killers, extremists, or cold blooded killers, however we do find out that they all have gathered with a common interest. One that most likely was initiated, funded, and carried out as a group effort (and by paying off others to do the …more..dirty work). That aspect alone is part of the reveal. The other outcome is the last spoken words of Lucie before the priest puts a gun to his head. This final act was left ambiguous on purpose for the simple fact that no one really knows its resolve. The after life itself was achieved thru suffering, a state that must be “earned” to ascend to. The priest commits suicide once he overhears Lucie’s whispers…but what does that truly mean?

What Does The Ending Of Martyrs Really Mean?

My guess is that the suicide may have been a symbol of his acceptance of what lies and wanting to rush the process …or…. was it a reveal that suggests failure that is too great to burden the task of communicating it back to his colleagues? We’ll never truly know, but we are left with an image of the 2 girls in what appears to be a state of dying bliss……..so maybe “that” in itself is enough to suggest what lies ahead? There is no complete resolve here as that is left up to the viewer to ponder. 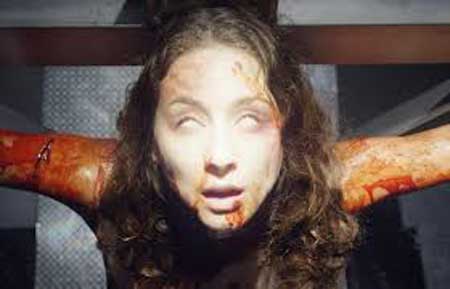 Martyrs (2015) may be enough for those who prefer the lighter version, though I’m sticking with the original. In any case, the film of either version is worth a viewing if only for the simple fact that it is something off the beaten path of other horror genre films.

Martyrs (2015) may keep you thinking long after which is more than I can say for many. The film is now available on bluray per Anchor Bay Entertainment.