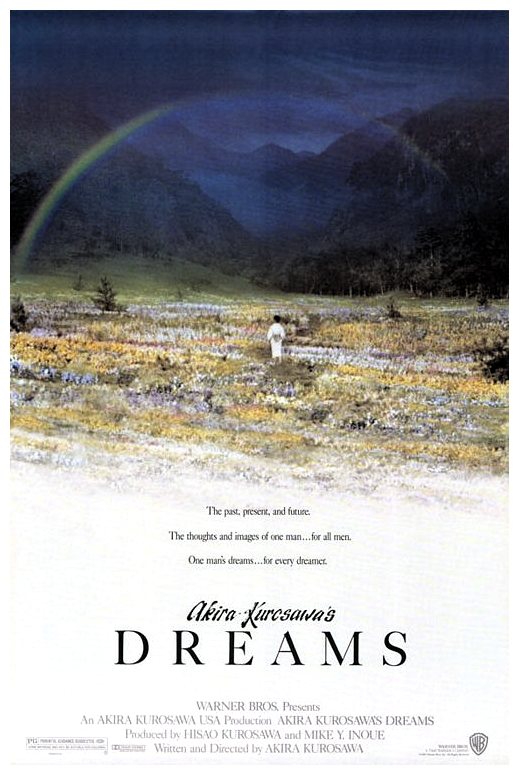 “This is essentially eight separate short films, though with some overlaps in terms of characters and thematic material – chiefly that of man’s relationship with his environment. Sunshine Through The Rain: a young boy is told not to go out on the day when both weather conditions occur, because that’s when the foxes hold their wedding procession, which could have fatal consequences for those who witness it. The Peach Orchard: the same young boy encounters the spirits of the peach trees that have been cut down by heartless humans. The Blizzard: a team of mountaineers are saved from a blizzard by spiritual intervention. The Tunnel: a man encounters the ghosts of an army platoon, whose deaths he was responsible for. Crows: an art student encounters Vincent Van Gogh and enters the world of his paintings. Mount Fuji In Red: nuclear meltdown threatens the devastation of Japan. The Weeping Demon: a portrait of a post-nuclear world populated by human mutations. Village Of The Watermills: a sunny portrait of a village whose population is entirely at one with nature.” (courtesy IMDB)

REVIEW:
The extraordinary thing about The Seven Samurai (1954) – the film Akira Kurosawa is most famous for in the west – is that even a ten-year-old child can watch all three hours and twenty minutes without showing any signs of boredom. It can’t simply be the story, for many of the nuances will inevitably pass a child by. So it must be the visual quality, the editing, the composition, the whole look of the film. In just the same way a child can look at the paintings of Paul Gauguin, Vincent Van Gogh or Paul C’ezanne, and be seduced by their design without understanding the theory behind it. Kurosawa is a naturalistic director, in direct line to the poets, the philosophers and the painters that Japan has produced so fruitfully over the past three thousand years. His greatest films have a visual and literary universality, which explains why he was so attracted to that other master of the universal, William Shakespeare, whose MacBeth Kurosawa turned into Throne Of Blood (1958) and whose King Lear he turned into Ran (1985). Following a failed suicide attempt after the failure of the studio-bound Dodeska-den (1970), Kurosawa was invited to the Soviet Union to direct Dersu Uzala (1975), a film about friendship based on absolute trust between a fur-trapper and the Russian leader of an expedition in Nineteenth-Century Siberia. 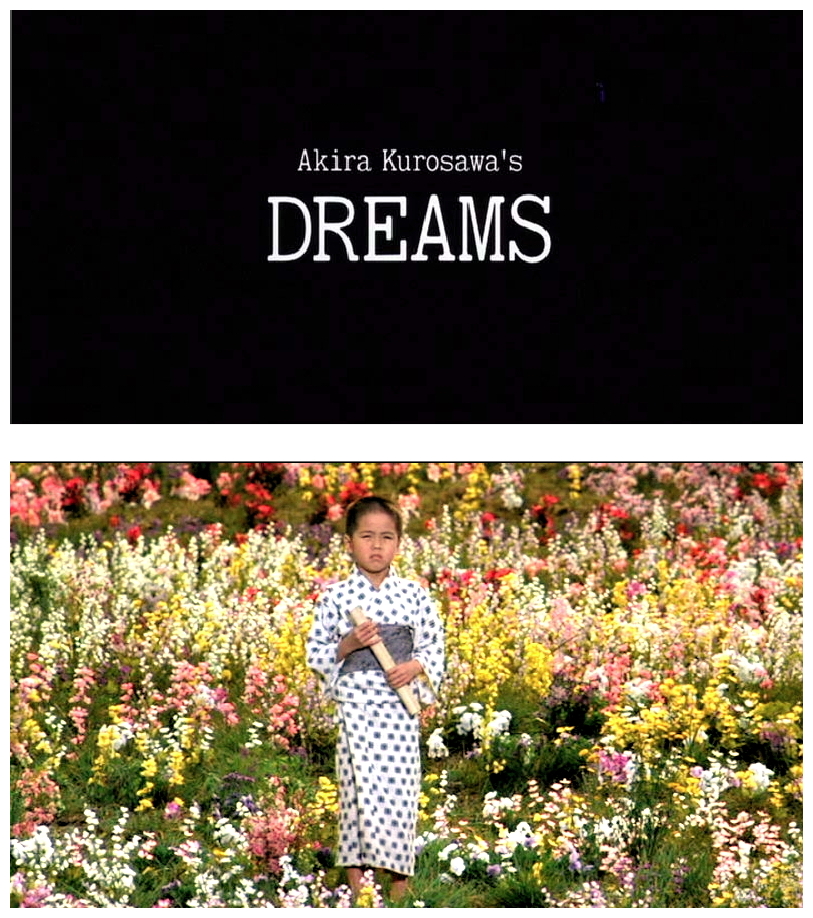 The result is a masterpiece and its success with audiences ushered in the last great creative period of this noble filmmaker, an era which encompassed not only Ran but also its predecessor, the visually awe-inspiring and sublimely literate Kagemusha (1980). Kurosawa is a world-class filmmaker who has dreams like the rest of us, only his dreams are artistically satisfying enough to warrant their own film. Uneven as any other anthology/omnibus movie might be, Dreams (1990) is nevertheless a unique screen experience, an ambitious and often extraordinary attempt to replicate the elusive qualities of one’s unconscious fantasies in eight mini-movies. Kurosawa had trouble getting financing from Japanese studios, blaming much on the political nature of his criticism of nuclear power in the film. He sent a copy of his script (written in less than two months) to Steven Spielberg, who liked it enough to get a deal for the film through Warner Brothers. The first episodes involving ‘The Artist As A Child’ are charming cautionary parables complete with Kabuki interludes, while the episode entitled The Blizzard allows Kurosawa the luxury of proceeding at a snail’s pace, as we follow a snow-challenged expedition looking for a ghost-like snow-fairy (Mieko Harada) with billowing hair – an apparition somewhat reminiscent of Kwaidan (1964). 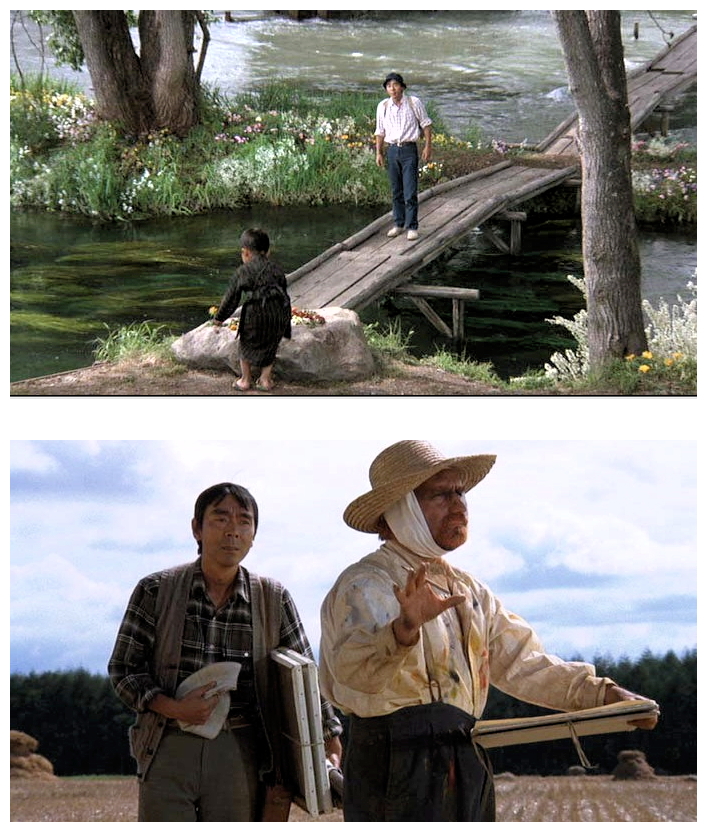 The Tunnel is a powerful denunciation of war and its consequences as a guilt-ridden commander is haunted by the grim spectres of soldiers his negligence caused to be killed, with their incessantly marching feet drummed into his tortured brain. Next up Martin Scorsese (of all people!) portrays Vincent Van Gogh in a slight but endearing side-story involving ‘The Artist As An Adult’ (an open and agreeable character played by Akira Terao) now a student. somehow entering the great artist’s world and his works, a most satisfying journey indeed. Kurosawa had envisioned the role of Van Gogh being portrayed by Scorsese when he first wrote it, based on his first meeting with him seven years earlier. Memorable for very different reasons is a genuine nightmare that bleeds into two loosely-connected dreams. Mount Fuji In Red captures the unparalleled horror of an end-of-the-world scenario with the accidental eruption of nuclear reactors triggering Fuji’s meltdown in spectacular apocalyptic fashion. The hundreds of extras fleeing madly as all hell breaks loose makes this the most ambitious and arguably the most powerful of Kurosawa’s mini-movies, capturing the helplessness and hopelessness we all experience in similar inescapable dream situations. 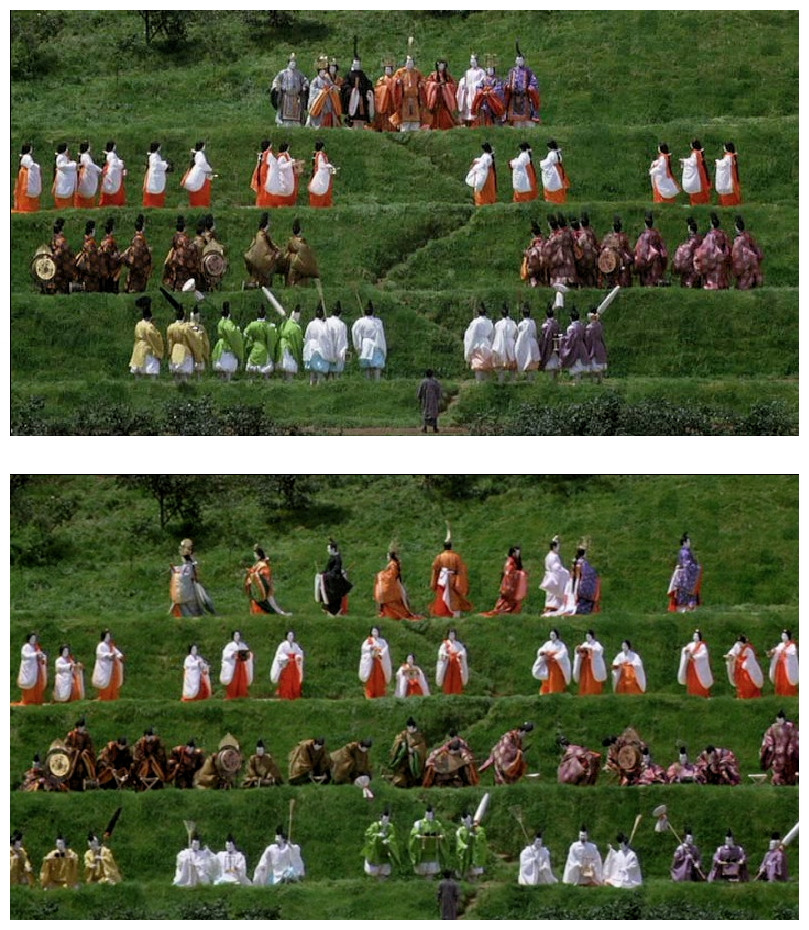 An equally disturbing follow-up tale concerns the aftermath of mankind’s nuclear destruction, as a weeping one-horned mutant (Chosuke Ikariya) lectures about mankind’s folly amidst gargantuan flowers and other irradiated monstrosities. The nocturnal wailing of fellow horned mutants, all in agonising pain, is truly a vision from Hell. Fortunately, Kurosawa decides to end his primal storytelling odyssey on a positive note in Village Of The Watermills, with human goodness and the refreshing simple life trumping our often grotesque and evil tendencies. The types of weather in each segment set the mood or have a symbolic meaning, be it the rain/rainbow in Sunshine Through The Rain and its traditional folklore-based meaning, the snowy tempest in The Blizzard representing difficult times in life when one needs to persevere to achieve his goal, the gusts of wind in Mount Fuji In Red setting the tone of chaos and turbulence of the segment and, finally, the contrast between the heavy clouds of The Weeping Demon and the serene sunny weather in Village Of The Watermills. 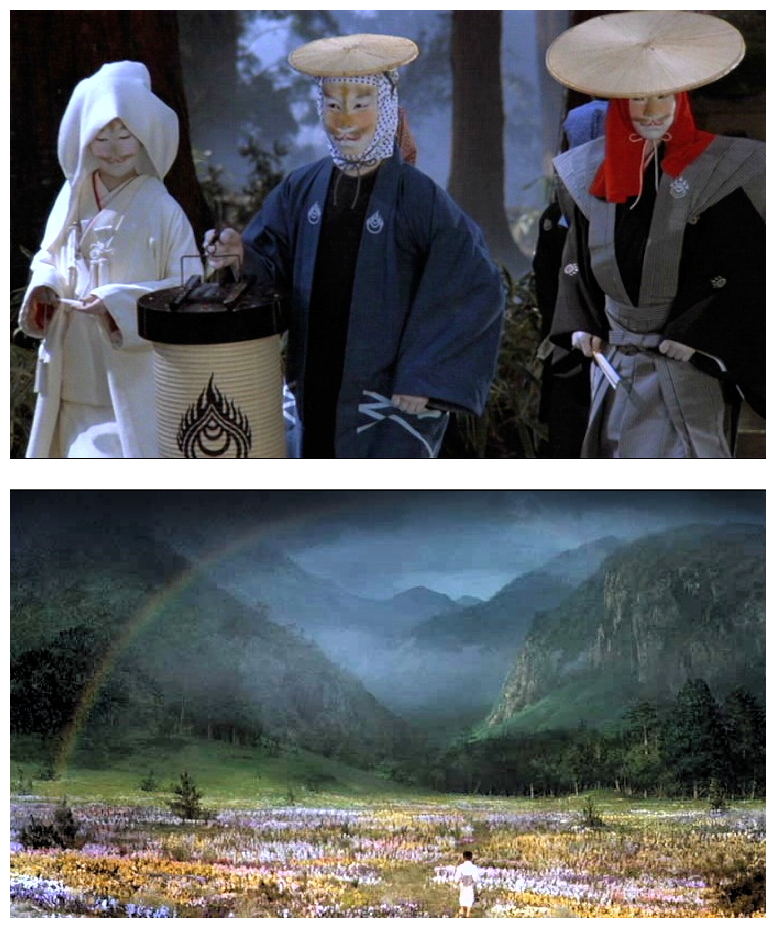 The eight segments of the film were originally joined by three more that ended up being cut due to time restraints. One involved people flying through the air, another involved Buddhist priests protesting temple taxes, and the third focused on newscasters talking about a breakout of world peace. Dreams is undoubtedly an art-house confection by a seasoned master, but it is also masterful and provocative filmmaking, a brave attempt to capture the heavy, often abstract feelings conjured by our unconscious visions. With state-of-the-art special effects from Industrial Light & Magic, exquisite photography and a small-but-passionate cast, Kurosawa’s exploration of his own inner conscience speaks to us all. At this point I’ll ask you to please join me next week when I have the opportunity to present you with more unthinkable realities and unbelievable factoids of the darkest days of cinema, exposing the most daring shriek-and-shudder shock sensations to ever be found in the steaming cesspit known as…Horror News! Toodles! 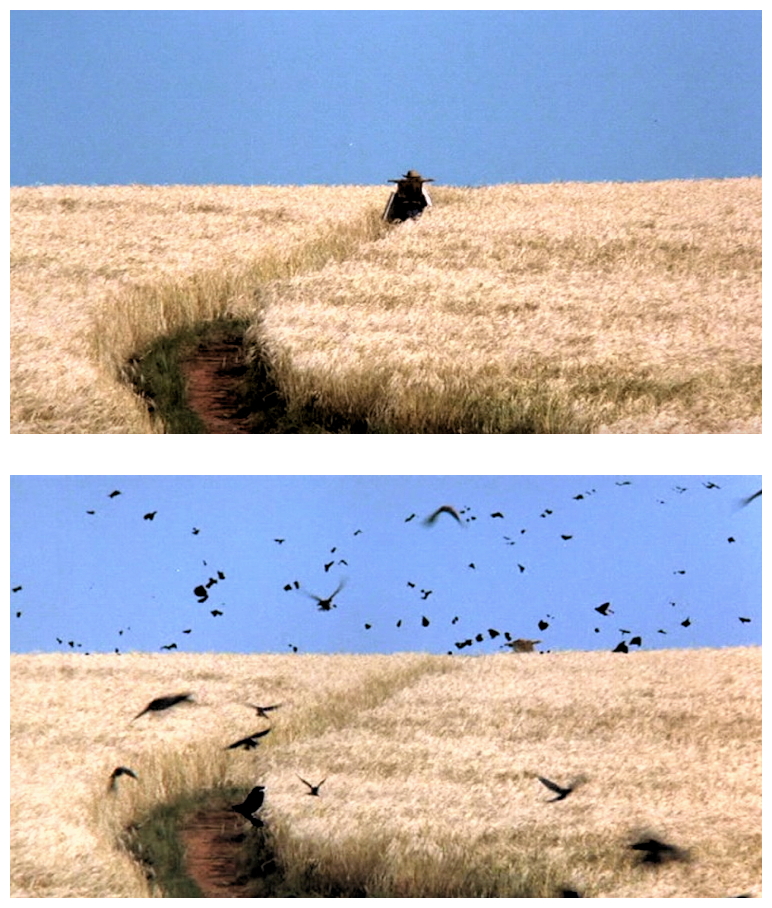 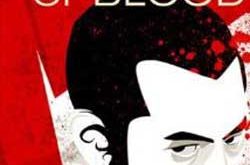