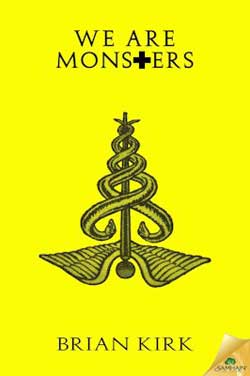 We Are Monsters
By: Brian Kirk
Samhain Publishing

“That’s the worst part of his disease. The voices that he hears? They lie.”

“Everyone’s got some vice to help compensate for the fact they have to pretend to be someone else.”

Things are not quite right within the confines of the Sugar Hill mental asylum. Since a new patient has been admitted, a paranoid schizophrenic who has the ability to see everyone’s dark side things have never been the same. A philanthropist by the name of Dr. Eli Alpert has vowed to cure his patient against all insurmountable odds. While a colleague Dr. Drexler searches for a new medication to cure schizophrenia the side effects may be worse than the actual affliction. Will the Sugar Hill Asylum be able to overcome the darkness that lurks within or will all that inhabit the four walls submit to the inevitable in We Are Monsters?

As noted in the above quotations there are certainly some most momentous, compelling dialogue that exists within this debut novel from the highly talented Brian Kirk. I’ve always been a celebrated fan of psychological horror. Quite often fans of the dark side take for granted in a sea of literature saturated with zombie lore, vampires, werewolves, creature features and the paranormal that the very real, tangible horror can life within us. As I’ve been following the success of We Are Monsters through varying social media, blogs, etc. I was also quite impressed at the degree of open candor the author has taken liberty in discussing his own personal demons. They say the first rule of any effective writing is to write about what you know. Kirk establishes this from the get go and we as the readership never second guess the authenticity of the tale and ultimately become addicted from page one.

The author’s style in combining a blend of exposition, speculation, dialogue and action is indicative of a well-seasoned story writer and it takes not a reviewer, critic or literary analyst to see this writer has a most brilliant future ahead of him. Some of the intensive therapy sessions are engaging within the cerebral cortex is the sort of thing insomnia is spawned from. Quite often these sessions evolve into a surrealistic landscape of the very darkness that lies within the average inhabitant within the Sugar Hill Asylum. Visceral type descriptions in the mayhem and carnage that unfolds is often grisly and not at all for the faint of heart.

The characters’ conception for the most part are realistic and believable individuals the readers will have no difficulty in getting behind. Some of the interaction between the protagonists is heartfelt and comes across casually, realistically. Even the antagonists that lurk within the shadows make their mark and refuse to relent until the very final pages.

Inner monologue and personal reflections paint a vivid picture while designed in this author’s prose. It heightens the individual’s inner emotions, no easy feat for a third person perspective as opposed to draft in first person persona.

Descriptions of the asylum life is poetic in nature in all of its deranged grandiose. Its evident Kirk has done extensive research before putting pen to paper in We Are Monsters. His efforts clearly accentuate the authenticity and plausibility of this tale, forever expanding the parameters of our imagination.

Within the final act of this novel the intensity of the plot is simply stated as off the chart. I’m hard pressed to know of any reader that would not be able to put We Are Monsters down until its very final compelling conclusion. I highly anticipate the next available release from one Brian Kirk and encourage anyone who is a fan of horror that resonates within the psyche long after the fact to embark upon this gem of a read.