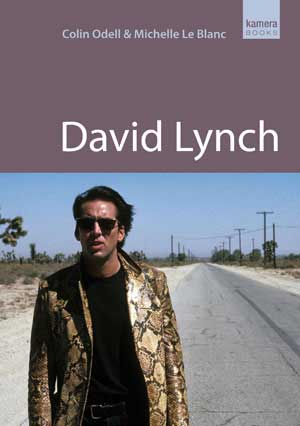 Much is the wonder of the works of enigmatic director/ artist David Lynch. So much that even for hard pressed fans, it sometimes takes news ideas, and opinions to get the essence of his movies into consumable form. Colin Odell & Michelle Le Blanc take on that challenge with a book that Lynchians would be proud to own.

We are introduced to David first through a brief overview of his up-bringing’s and childhood background. With this, we are explained his past interests that led to his attraction to the medium of film. We are also explained of his early days of struggling with no budgets to prolonged budgets that would stretch out for many years. Even in the face of rising interest from Hollywood, David stayed true to his craft by introducing project after project to a bewildered audience that found themselves clearly either on the fence or washed away with incomprehensible cinematic experiences.

What is rewarding about this book is that the authors really took the time to dive into and understand the complexity of David’s work so that it can be translated into readable form and broken down into reason. This is often a point of confusion to viewers who don’t get the Lynch universe to be able to consume it wholly. The good news is, that even for the hardened Lynch fan, an aid like this is a welcome read to get a better perspective into his train of thinking. I would often imagine the after film sit down sessions as scholars debated on the true nature of Lynch’s message. Armed with this book, Im willing to bet you could stand your own in those situations with a certain confidence of understanding.

For me, who became a huge fan in later years, had alot of the same misconceptions about his work that any rational person might perceive. Though like a mossy growth hanging form a damp tree branch it grew on me to the point of more than just acceptance but admiration for this creativity and insight on the human mind portrayed into screenplays. His darkness is the horror that seeps in between the crevices and finds its way to you in unassuming ways. Yes, the work of David Lynch is a marvel that I anticipate with each new offering. The book further explores each of his works with detailed breakdowns and alludes to the emotional content that David is trying to translate to his audience. Combine that with the pressure of Hollywood acceptance and budgets that David has to struggle with both lacking and astronomical at times that weighs on how deep he is allowed to play with the levels of obscurity introduced in each creation.

We are explained the let downs of the 40 million project “Dune” and the attraction of darker films like “Blue Velvet” and “Mulholland Drive”. We are introduced facts that may have gone overhead in viewing’s like the condensing of “Mullholland Drive” from a potential TV series to a much reduced film.

We are also taken on the journey of his hit TV series “Twin Peaks” and how the pressure of the producers actually killed the momentum it had achieved. All this being not just a filmmakers journey, but an artists journey of the phenomena David Lynch. As it is noted, even in the simple intro to “Fire Walk with Me”, where we open on a static TV that is soon destroyed with a impact of a sledgehammer …there is much more to read into that just eye candy visuals.

In “Twin Peaks”, we are given an exhausting breakdown of characters and how they all relate. With a series so involved and so emmense….The book’s breakdown helps to define it in simple form for easier consumption. In “”Wild At Heart”, we are revealed the underlying themes of “Wizard of Oz” and Lynch’s knack for revealing a darker side to every light. Though this is just a taste of what is presented.

The book is printed on beautify stock at 5.5×7.5 size that is perfect for bring alongs. After chapter reads it does help furhter the undertstandingt of his works to shed new light on themes that a casual biewer simply wouldnt get. I have to say that if you are one the many dedicated Lynchians , this book is a must have and keepsake. For filmmakers it offers a closer relationship to the understanding of his films to guide inspiration into a new way of thinking and translating idea on screen.

In many ways this book is not only a reference to Lynch’s work but a recommended read after each film viewing. I know I’ve found a new Lynch bible that I can turn to after a film viewing to grasp some clarity to put the pieces together. You can sure bet if I ever finish “Inland Empire” that this book will be my first grab.