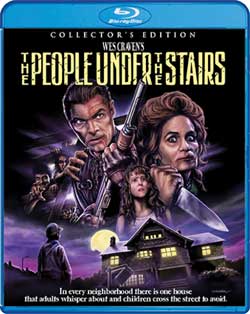 Two adults and a juvenile burglar break into a house occupied by a brother and sister and their stolen children and can’t escape.

Wes Craven has an interestingly varied filmography for a director who has stayed mostly in the genre of horror.  He has been in the business for forty years and has remained a driving force in the genre through his different endeavors the entire time.  From his earlier grindhouse style horror movies of The Last House On the Left up through his meta-filled movies like New Nightmare and the Scream franchise, he has managed to use different themes and story elements to keep himself relevant.  And even though 70s Wes Craven feels different than 80s/Early 90s Craven, which feels different than new millennium Craven, you can still see elements that stick through the years. 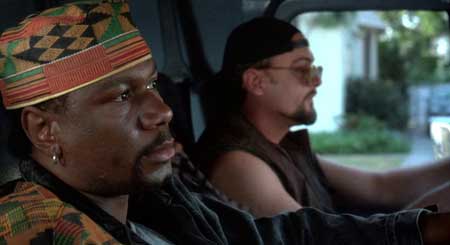 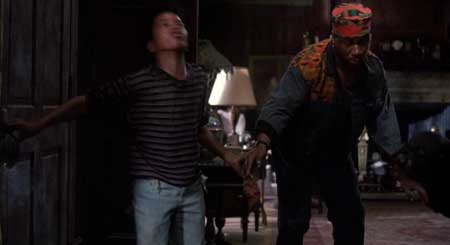 One theme that has lasted through the years is the idea of family.  Wes Craven has always liked to delve into families, whether they are dysfunctional families or families having troubles due to an outside force.  Many of his movies take normal, semi-happy families and tear them apart.  One of the lesser appreciated movies he has made that dealt with dysfunctional families and families that fell on hard times is The People Under the Stairs.   The 1991 film stars Brandon Quintin Adams as Fool, a kid who ends up trapped in a house with a maniacal couple (Everett McGill and Wendy Robie, who also played a couple in Twin Peaks), their daughter Alice (A.J. Langer), and the many people who have been trapped there in the past.  Also featured in the movie are Ving Rhames, Sean Whalen, and Bill Cobbs. 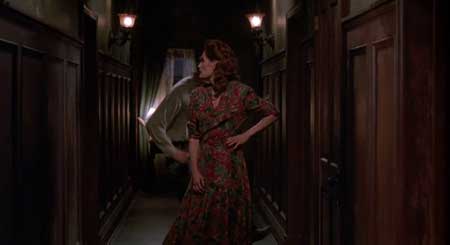 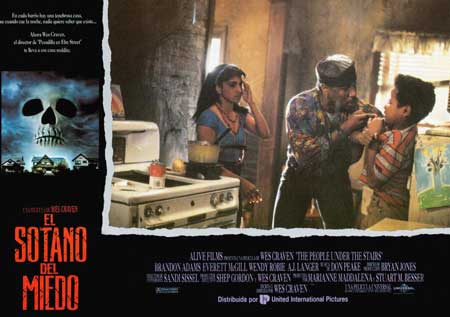 There are two primary families dealing with issues in the movie.  Let me begin by describing Fool’s family, which is the catalyst for the rest of the movie.  Fool lives in a rundown apartment, part of the only family living there.  He lives with his sister and his sick, dying mother.  They have no money and have just found out that they will soon be evicted.  It is a family that clearly cares about each other through the way they interact and the way they protect one another from other things.  The mother doesn’t want her son to know she is dying.  The sister doesn’t want Fool to get involved in the goings on in the house that he becomes trapped in.  Another member of this family is the surrogate brother figure of Leroy (Rhames) who brings Fool into the criminal life.  Leroy takes Fool under his wing like a brother would when teaching something.  Fool becomes his apprentice in crime so that he can make money to keep the house and his mother’s health.

When Fool, Leroy, and a man named Spenser (Jeremy Roberts) begin casing the landlord’s house in order to get revenge and money, the audience is introduced to the other family of the movie.  The family who are landlords of Fool’s home consist of a man, a woman, and a daughter.  We soon come to learn that the daughter isn’t really theirs, but one of many children they have kidnapped over the years.  This family, unlike Fool’s family, is uncaring and abusive.  The woman wants their family to be perfect, yet it never can be.  The parents beat the child when she is out of line, and they keep her locked up when anyone else enters the house.  Their home is covered in locks, mesh wiring, and booby-traps to keep the kidnapped children from escaping.  The home is much more tension-filled than Fool’s more caring family.  The clash of these two family types is what pushes the story forward. 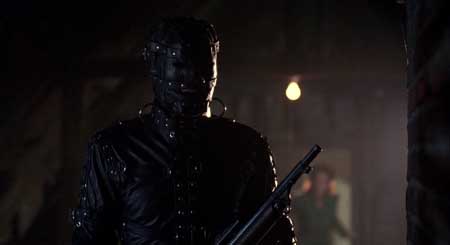 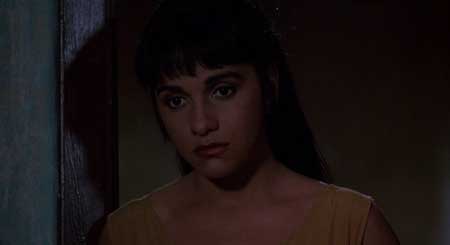 The People Under the Stairs is all about Fool’s experience with the “family” in the house as he attempts to find a way out.  He witnesses the abuse that they cause to Alice.  He discovers all of the children that have been kidnapped and held captive for years.  He finds all of the skeletons in the closet of the family and through finding them, decides that he has to save Alice.  His upbringing with his better, more average family creates a knowing sense of the wrongdoings of Alice’s family within Fool.  It is the driving force of the darkly comedic violence that happens throughout the movie.

The dark comedy that fills out The People Under the Stairs causes a tense escape story to become a wacky, violent escape story.  There are comedic moments scattered throughout the plot.  There are comedic visuals scattered throughout the costumes, set design, and cinematography.  The movie is as much dark comedy as it is a harrowing horror tale about a boy getting out of a house owned by murdering kidnappers.  Most of the jokes land well enough that the movie has an underlying humor to it, lifting it above the simple horror tale that it could be.  It becomes more entertaining with the mixture. 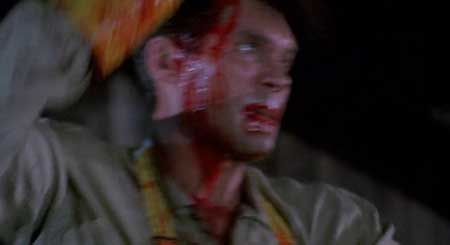 The People Under the Stairs is an interesting outing for Wes Craven.  It manages to tell a solid story about two clashing familial styles and infuses horror and humor in a way that makes it all the more enjoyable.  It might not be as fondly remembered as some of the movies that he made prior or some of the movies he has made since, but it is another Wes Craven movie that is definitely worth checking out.  Hopefully more people see and enjoy this fairly hidden gem in his filmography.