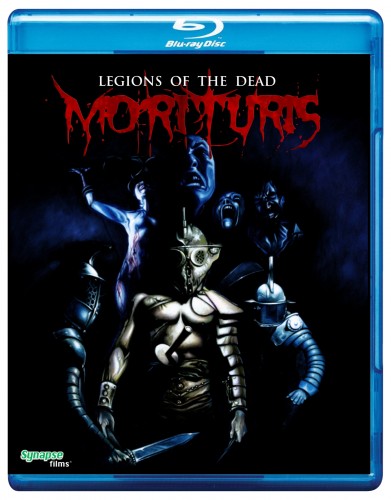 One of the most talked-about films of the 2011 Fantasia Film Festival, Raffaele Picchio’s MORITURIS quickly became controversial for its scenes of extreme horror, which got the film banned in in its home country of Italy. But over the years its reputation has grown into that of a new Italian horror classic, reminiscent of the works of Lamberto Bava (DEMONS) and Lucio Fulci (ZOMBIE). Now, American audiences can see it for themselves in eye-popping High Definition from Synapse Films!

Raffaele Picchio’s Banned in Italy MORITURIS Comes to the U.S. on DVD & Blu-Ray from Synapse Films This September!

Two lovely Romanian girls take a trip with three Italian men to a rumored midnight rave in the middle of a dark forest. As the gang proceeds on foot to their final destination, a mysterious graveyard is discovered, a shockingly vile plot twist is revealed and bloodthirsty undead Roman gladiators rise from the dead to torture and mutilate their victims! For the two women, an already terrifying night is about to get much, much worse, as the zombified warriors hunt down the group to tear their heads off! Will anyone survive the night?