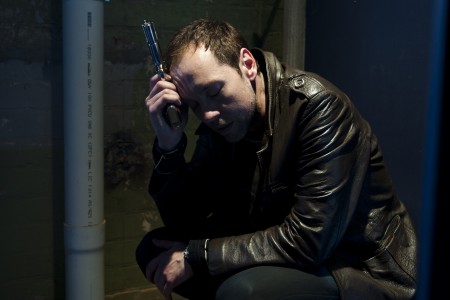 Freestyle Releasing and Freestyle Digital Media (FDM) announced today that they have acquired North American theatrical and VOD rights to the award-winning Australian thriller THE SUICIDE THEORY, which was directed by Dru Brown. The film stars Steve Mouzakis and Leon Cain and was produced by Brown, Christian McCarty, Jacob McCarty, Dan MacArthur and Melanie Poole. The film will have a day and date release on July 10th in the U.S. and Canada.
THE SUICIDE THEORY gained a following last year after winning the Grand Jury Prize at the Dances With Films Festival. This honor includes a distribution partner; however, the filmmakers opted to go with Freestyle. The Suicide Theory also won the Audience Award at the Austin Film Festival.

The film is an intense thriller that takes the viewer on an unexpected rollercoaster of twists and turns. A despondent man hires a demented killer to assist him in suicide, but for some reason, miraculously survives each attempt on his life.

The deal was negotiated by Chris Charalambous, Head of Acquisitions for Freestyle Releasing and Freestyle Digital Media with Christian and Jacob McCarty on behalf of the film.

“The Suicide Theory is one of those special films that comes along,” said Mark Borde, President of Freestyle. “With outstanding performances and an incredible script, we are honored Freestyle was picked to bring the film to a larger audience.”

Recent Freestyle titles include the box office mega hit GOD’S NOT DEAD, Rob Reiner’s AND SO IT GOES starring Michael Douglas and Diane Keaton, the wholesome romance OLD FASHIONED, DO YOU BELIEVE? with Mira Sorvino and Sean Astin and LEFT BEHIND starring Nicolas Cage.