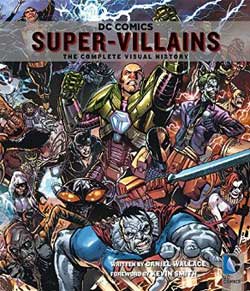 While everyone loves a good superhero, I’ve always found the super villains to be much more interesting when created with purpose and fashioning a unique skill set. They are the ultimate protagonists differing in size, shape, form, origin, motive, and costume.

Most long time comic book fans have had the joy of experiencing these characters over several years, decades, and versional transformations. Usually assigned to a primary hero as one of the repeat offenders in comic books, villains have certainly come and gone. We can easily name many of the more notable villains that have emerged over the years (Joker, Lex Luthor, Catwoman, Mr. Freeze…).

Take for instance Flash, who’s universe has a history of head butting against the some of the greats (Reverse flash, Captain cool, Mirror Man, Boomerang and Grodd… just to name a few). All come to the table with unique abilities and particular way of doing battle. This in itself creates not only ongoing conflicts, but….. introduces new and inventive ways that our hero has to defend himself to disable his enemies. Well its all here…the history, the trends, the particulars and the backgrounds.

The latest book that came across my desk is titled “DC Comics: Super Villains – The Complete Visual History by author Daniel Wallace, with Foreword by Kevin Smith. It’s the kind of book that you “hope” for and expect………. chock full of brilliant illustrations and comic renderings of all our favorite DC villains. Just this in itself is worth the viewing to grab a glimpse of the incredible talented renderings of these characters. Now the art runs the gamut of styles and interpretations of our villains, but in a nutshell it’s damn impressive work.

The book is in full color, Hard cover in a perfect made-for-coffee-table format. We are greeted with plenty of great “super villain group shots” which also appear much later in the book. As mentioned, all the greats are here with full descriptions, color illustrations and variations under each of their own personal showcases. The book is divided into chapters that lead to what I’m calling the primary chapters of interest.

Though what that amounts to is “mostly” a showcase of villains that usually appear per major hero (Batman, Superman, Wonder Woman…etc).

In the early days when all we had to work with was the comics themselves, I would often look forward to the covers that grouped super villains under one united team. This usually meant the issue was going to have a smattering of hero-to-villain battles based on the exploits of super powers. The groupings here brings back that age-old passion of seeing villains unite. The book itself flows nicely from one villain to the next establishing the importance of DC’s prime bad persons. Now I don’t know them all by heart to say if “every” villain made it in (like for instance all the golden age villains), though that’s not as important as just having a cool book to browse thru. Insight Editions have indeed presented “that” in spades.

Complaints: Not really……with the exception that the ongoing gray type was hard to read. I took it as a design choice, though it was a bit too small for my tired eyes to focus on.

If your on the fence on this one, don’t be…it’s an impressive book that while is listed at $50, is really closer to $30 to $35 on the market. If your purpose is to coffee table this one for others to look thru, it is perfect for that reason. Otherwise…well us comic books fans just love to read about our villains…fair enough

Make sure to stop by the Insight Editions site where you can pick up “DC Comics: Super-Villains: The Complete Visual History”