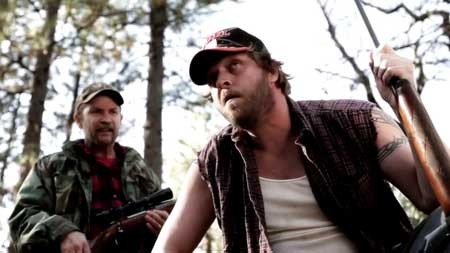 When high maintenance city girls Quinn and Char decide to rough it in the mountains, they get more than they bargained for. Creepy mutant parasites and crazy mountain men were not part of the plan. That’s just gross dude. Fake tans and lip gloss can’t help them now. What’s a girl to do?

Another short film, this time we have WURMS (and yes, that is the correct spelling), from Wretched Productions.

The film is directed by Heidi Moore, and written by Heidi Moore with Shawn Dyer. This was sick, gross and a lot of fun. But I’m getting ahead of myself…

Our story follows two redneck pals, Herbert (Brent Boyd) and Lumpy (Braidon Thorn) and their faithful dog Domino (as himself) on a hunting trip. What are they hunting? Apparently anything that moves. They are tracking a deer, but take potshots at squirrels, chipmunks, shadows…

Anyway, Domino hasn’t been himself lately. Herbert and Lumpy are discussing this as they walk around the woods, coming to the conclusion that Domino has worms to explain his unusual behaviour of late. 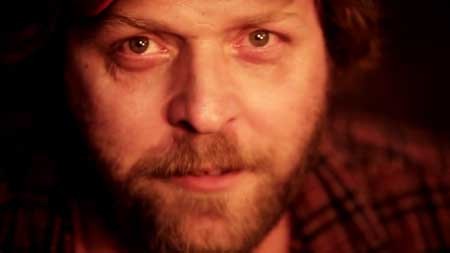 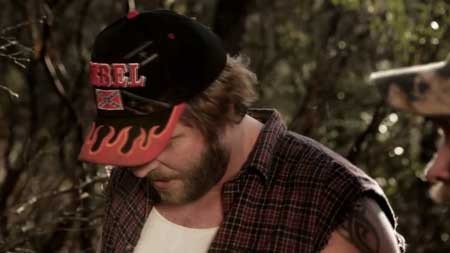 Domino runs off to into the woods and finds something interesting to eat, as dogs do. Let’s just say it doesn’t go well for poor Domino. Herbert and Lumpy find him, and it’s not a happy moment.

But it only gets worse from there. Worse, you say? Yes, says I. Much worse.

This film gets really icky really fast. Some nice special effects by David Rende and Renee Boyd. I think this whole group had way too much fun making this film, and trying to gross out the viewer. Certainly that is the kind of thing I enjoy doing.

I didn’t have much look getting any information on the cast and crew. I did find the names of several of the people listed in the credits, but no pictures to be certain if I had the right people.

Either way, this film is a bit of nasty goodness that’s both funny (at points) and perhaps a bit disturbing. I liked it.

So using my special “short scale” of one to five, five being awesome, I’m giving this film 5 worms.