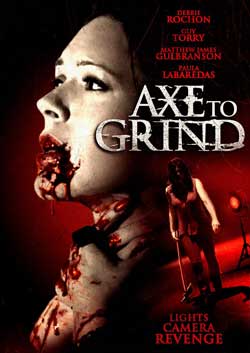 veteran horror movie scream queen goes on a killing spree after her lover cheats on her with a young actress and then makes the mistake of leaving her out of his newest film.

I thought that Axe to Grind sounded somewhat interesting before I saw it so I went into it with pretty high hopes as I thought that it had the potential to be a pretty fun little movie. Hell, it had all the elements needed to make a kick ass horror flick such as a decent-sounding premise and an excellent cast (headed up by genre legend Debbie Rochon herself and a few new faces that have proven themselves to be quite talented in their own right) so I plopped down in front of my TV expecting to be thoroughly entertained. Unfortunately I wasn’t. To be honest I wasn’t exactly expecting it to be the next horror classic or anything but I thought that it would have been a lot better than it actually was. 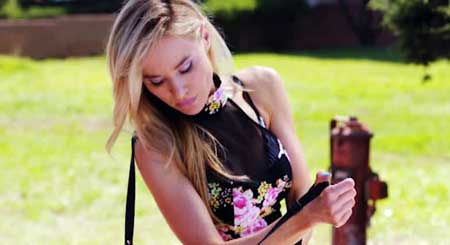 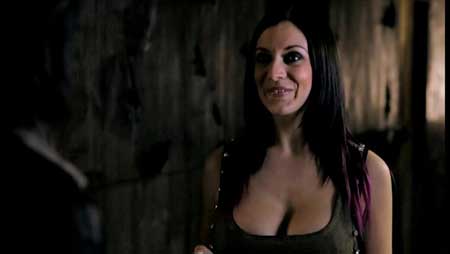 I don’t know if it was just me or not but I thought that the writing just wasn’t up to par. The dialogue is pretty clunky and just seemed very unnatural. While I liked the basic idea behind the film it is more than a little bogged down by poor writing and plotting all around. It takes forever for things to get going and other than the blood bath that takes place in the opening moments nothing that exciting or extraordinary takes place until almost an hour into things. I thought that the entire film was padded with forgettable scenes of redundant dialogue and just general dullness that had me feeling bored out of my mind. When Rochon’s character finally does start taking people out I was at the point where I had already pretty much checked out and just didn’t care anymore to be perfectly honest. 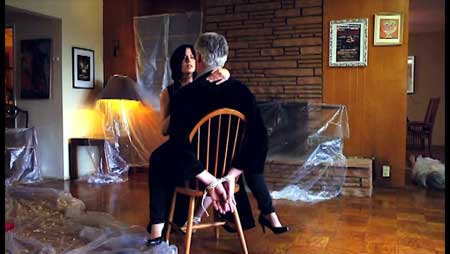 I was also pretty let down by how lame the death scenes were as well. We don’t get a whole lot of variety here as pretty much all the death scenes are exactly the same. We see people get killed with an axe over and over again (which admittedly I guess is fair considering the name of the movie) and I was hoping for a little more. None of the gore is really that impressive either and the special effects were pretty lackluster at best (there is one scene in particular that comes to mind that involves a victim spitting up a mouthful of blood and it looks just like chocolate syrup). I like creative and original death scenes in my horror films but you won’t find any of those in Axe to Grind. I’m not saying that I have anything against a good axe murder but after you see them done repeatedly in the course of an hour and a half or so they get pretty boring and really lose their impact. Honestly, could they not give poor old Debbie some other sort of weapon at least once just to break up the monotony? 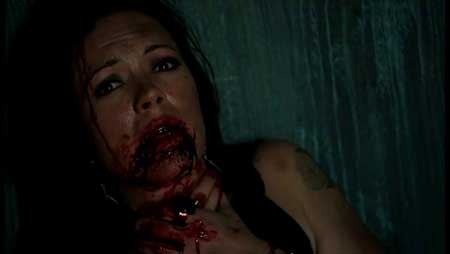 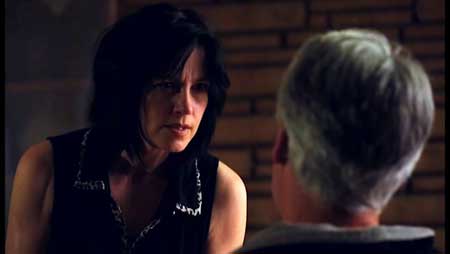 Really the only good thing about the movie was the cast. I thought that the acting was pretty decent from everyone involved and I’ll have to say that the film boasts a really attractive group as all the actresses that appear in it are very easy on the eyes (especially Dani Thompson who plays Nikki, damn she is hot). Debbie Rochon does an awesome job and kicks all sorts of ass as usual and I couldn’t help but think that this role was a little beneath her in a lot of ways. It is obvious that she had a great time playing the part and she really knocks it out of the park (as does Michelle Tomlinson in the role of Cheryl) but I don’t think that there will be a lot of people out there who would argue that this film was her best movie. Overall I thought that everyone in the film did a terrific job and they are pretty much the only thing that the movie has going for it. 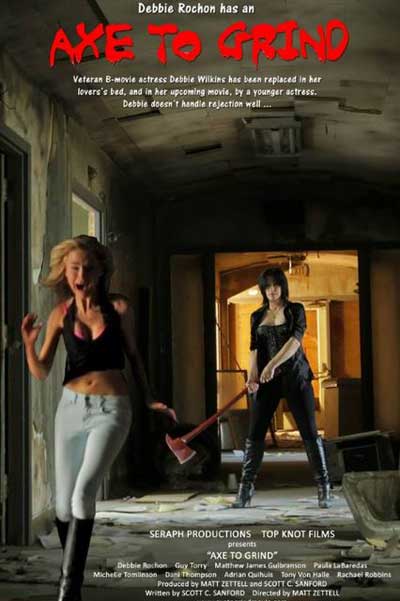 I don’t think that I’ll be revisiting Axe to Grind anytime soon. It is a pretty forgettable movie that just doesn’t have a whole lot going for it (aside from the cast). I think that it could have been a great film had it been handled properly as the basic premise is cool but the final product itself is anything but impressive. I’m not saying that it is the worst movie I’ve seen this year but in all honesty it really isn’t worth your time. Check it out if you are curious but keep in mind you are more than likely going to be disappointed after everything is said and done.